The JOHN PODESTA link to the SETH RICH MURDER... According to GEORGE WEBB, PODESTA is MONEY-LAUNDERING FORTY BILLION DOLLARS in HUMAN TRAFFICKING LOOT as we speak... Attorney General SESSION's ABJECT FAILURE to have the DoJ do EVEN A CURSORY INVESTIGATION in to JOHN PODESTA & HILLARY CLINTON's ABJECT CRIMINALITY & GEORGE SOROS FUNDED TREASON HAS EMPOWERED the "DEEP-STATE" = ZIO-NAZI COUP Against Trump, & is going to be the DEATH of AMERICA

- is ENABLING  not only CHILD TRAFFICKING
SUPER-MOBSTER JOHN PODESTA to "money launder" FORTY BILLION DOLLARS in illicit,  dirty money in to gold, art, & diamonds STASHED across Europe
AS WE SPEAK.....
but ATTORNEY GENERAL SESSION's  WEAK and PATHETIC roll as an IMPOTENT  figure-head "Leader" at the INSANELY CORRUPTED & TREASONOUSLY DEGENERATE "Department of  Justice"
is  ENABLING   the "DEEP STATE" TERRORISM WAR ON AMERICA,  i.e. the "anti-Trump COUP" which has now bubbled-over in to OPEN ASSASSINATIONS & MURDERS against not only FEDERAL INVESTIGATORS, prosecutors, & attorneys associated with the DNC LAWSUIT... but now AGAINST CONGRESSMEN in their leisure hours in the suburbs of  Washington D.C.!!

The figure-head JEFF SESSIONS run "Justice" (sic) Departments ABJECT FAILURE & INABILITY
to do EVEN CURSORY INVESTIGATIONS
in to  GEORGE SOROS FUNDED & INSTIGATED
VIOLENT PROTESTS brewing up all over America...

...or in to the ABJECT "HUMAN TRAFFICKING" CRIMINALITY of the PODESTA BROTHERS
and their serial CRIMINAL DIRTY WORK
for the SOROS-ROTSCHILDS run HILLARY CLINTON / "Democrat" DNC campaign...

...and even the DoJ's  ABJECT FAILURE
to do EVEN A CURSORY REVIEW
of the  CONSPIRACY & OBSTRUCTION of JUSTICE
(and MURDERS of federal prosecutors!)
SURROUNDING NOT ONLY the SETH RICH MURDER...

but the grisly toll of   MURDERS of those involved in investigating & filing lawsuits into the FRAUD & CORRUPTION  at the (then)  DEBBIE WASSERMAN SCHULTZ run DNC's role in the THEFT of the   STOLEN
(from Bernie Sanders voters) Democrat election primary -
is ENABLING the  CRIMINAL, TREASONOUS  CONSPIRACIES of the "Deep State COUP"   to UNDERMINE, SABOTAGE... and  soon enough to DESTROY AMERICA...

In this video,  former D.C. police homicide detective, and current private investigator ROD WHEELER who was HIRED by the SETH RICH FAMILY to INVESTIGATE their son's murder... explains that the Rich family has "retained" the PR firm THAT IS A MOSSAD FRONT OPERATION to "represent" their family's interests.... but the SETH RICH MURDER was a MOSSAD OPERATION.... so the family is, quite horribly, HELPING, AIDING, & ASSISTING the CRIMINAL TRAITORS who ordered & directed the MURDER of their son....
Once again we SALUTE  GEORGE WEBB's PHENOMENAL INVESTIGATIVE SKILLS...

..yet once again we must point out Mr. Webb & Mr. Goodman's  JEWISH MYOPIA - they are both JEWISH, and they both can't see the woods for the trees!    They keep explaining that  the DNC, "Democrat" PARTY is a MOSSAD, ISRAEL (jews!) SPY OPERATION !!
-  they KEEP EXPLAINING that  the FRONT GROUPS associated with all the RAMPANT CRIMINALITY, VAST GOVT. CORRUPTION,  and  TERRORIST  "HUMAN TRAFFICKING," DRUG TRAFFICKING,  MONEY LAUNDERING,  the highly profitable trade & illicit trade in MEDICAL ORGANS,  are all essentially SPY RINGS that... are DIRECTED & CONTROLLED by  MOSSAD, ISRAELI JEWS -  UNDER the NOSES of the CRIMINALLY CORRUPT & TREASONOUS  NSA, CIA, DIA, ONI and other U.S. "intel" agencies -  because the JEWISH SPY AGENCY OWNS & CONTROLS not only the  FOREIGN SPY RINGS, DRUG TRAFFICKING, &  MONEY LAUNDERING RINGS.... but the MOSSAD, JEWISH, FOREIGN SPY AGENCY  as the "executive action agency" of the DEEP STATE JUDEO SUPREMACIST BILLIONAIRES  OWNS & CONTROLS the CIA, FBI,  NSA, DIA, DEA, and ALL the "U.S." govt. intel agencies AS WELL...
INCLUDING the ENTIRE  "Department of 'Justice'" (sic) !!!


below video:
The ATTORNEY in this below video statement
who  is  part of the LAWSUIT against the DEBBIE WASSERMAN-schulz - MOSSAD! - controlled  DNC
- is AFRAID FOR HIS LIFE !!
The MOSSAD TERRORISTS, ASSASSINS, & traitors - operating WITH IMPUNITY under the VAST MOSSAD CONTROL of  the TREASONOUSLY HIJACKED U.S. government - are MURDERING FEDERAL PROSECUTORS associated with the DNC LAWSUIT... with not only with IMPUNITY, but under a government & mainstream media NEWS BLACKOUT - CENSORSHIP! - that ENABLES this on-going TERRORIST CRIME SPREE targeting the American people for MURDER, ASSASSINATIONS... MASS-MURDER, and for ultimate "RED TERROR" OVERT enslavement, subjugation, & extermination....

is a WEAK & PATHETIC FIGURE who DOES NOTHING as the DoJ REPRESENTS  MOSSAD MOBSTERS
sowing MAYHEM, MASS-MURDER, corruption & DEGENERATION of our govt. & society all
working for & under
jew BILLIONAIRE CRIMINAL TRAITORS 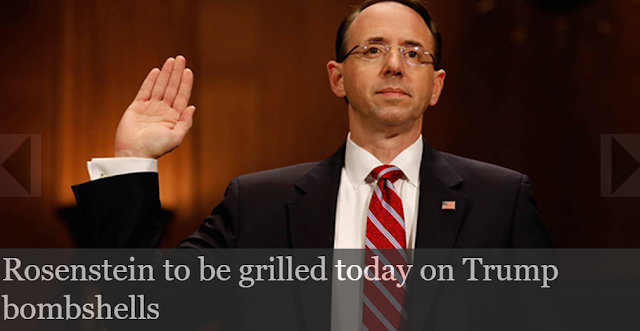 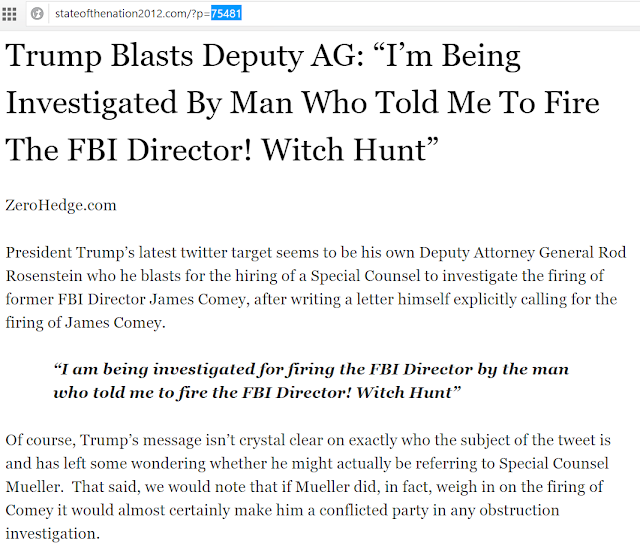 At this point, we deeply regret to inform,
IF YOU CAN'T SEE the  JEWISH link - the JEW CONNECTIONS to the CRIMINAL CONTROL GRID that RULES AMERICA with a MURDEROUS, TREASONOUS, IRON-FISTED, criminal slush-funds, OVERSEAS SAUDI JIHADI TERRORISM, &  "domestic"  TERRORIST ASSASSINATIONS bloody "wet work" fist - then you are either  TOO IGNORANT,  TOO STUPID,
or TOO COWARDLY to DESERVE ANY  "American citizen rights" - you have allowed  your country, your nation, your community, your Congress, and YOUR
"Justice Department" overseen
LAW ENFORCEMENT AGENCIES
to be HIJACKED by a MURDEROUS, bloody,
GENOCIDAL  FOREIGN POWER bent on your total, abject, ENSLAVEMENT, SUBJUGATION, and  (ultimately) your EXTERMINATION....

A long time ago, GEORGE WEBB warned that  the CLINTON FOUNDATION - which for all practical purposes was SYNONYMOUS with the SOROS,  HILLARY CLINTON ruled "DEMOCRAT" Party -  was involved  in HUMAN TRAFFICKING" i.e.  CHILD KIDNAPPING, RAPE, & BLACKMAIL sex extortion rings as a CONTROL GRID to RULE  not only the Democrat & Republican parties... but the U.S. military, financial system, "law enforcement," academic institutions, and cultural institutions as well... 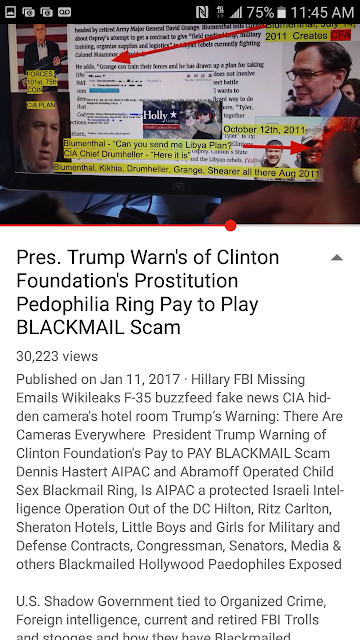 Pepe Escobar  wrote about this VAST RING of  INTERCONNECTED CRIMINALITY swirling around not only Hillary Clinton & the Clinton Foundation... but  this RATS-NEST of  INSIDER TRADING CORRUPTION,  blackmail, MONEY-LAUNDERING & CRIMES swirling around the GEORGE SOROS /hillary clinton CONTROLLED  DNC "Democrat" Party - and it's many HYDRA-HEADED  SOROS FRONTS back in NOVEMBER, 2016 !!

FOR THE PAST SIX MONTHS, the ENTIRE "JUSTICE department" has been a COLLABORATOR & COMPLICIT in COVERING UP the TSUNAMI of CLINTON FOUNDATION & GEORGE SOROS/rotschilds funded  DNC, DEMOCRAT PARTY  CRIMINALITY & IN-YOUR-FACE CRIME WAVES !!


including the JOHN PODESTA set-up & run 'CAP'  "Center for American Progress" - a RADICAL RIGHT-WING Zio-Nazi ELITISTS OPERATION
(essentially nothing more than a CONTINUATION of the Jew financiers "OVER, ABOVE, & AROUND BORDERS,"  "over, above, and BEYOND RIVAL EMPIRES"   contraband and SLAVE TRADING NETWORKS  MASQUERADING as "liberal," "Progressive" and "democratic" - but actually RADICAL RIGHT-WING  ROBBER BARON,  FEUDAL LORDS OVER SERFS"  HEAD-SMASHING TOTALITARIAN DICTATORSHIP

Virtually the whole planet holds its collective breath at the prospect of Hillary Clinton possibly becoming the next President of the United States (POTUS).
How’s that humanly possible"  [even]   as the (daily) Bonfire of The Scandals – relentlessly fed by WikiLeaks revelations and now converging FBI investigations - can now be seen from interstellar space?

It’s possible because Hillary Clinton, slouching through a paroxysm of manufactured hysteria, is supported by virtually the whole US establishment, a consensual neocon/neoliberalcon War Party/Wall Street/corporate media axis.

But History has a tendency to show us there’s always a straw that breaks the camel’s back.

This could be it – as revealed by WikiLeaks; March 2, 2015, the day when John Podesta wrote, “we are going to have to dump all those emails.”
Wikileaks has [just]  released a new tranche of correspondence from the hacked email account of Hillary Clinton’s campaign chair, John Podesta.
That happened to be the exact same day it was revealed that  Hillary Clinton had used a personal email server as Secretary of State.

Yet this reveals only part of the puzzle. There’s got to be a response to Podesta’s email – which WikiLeaks may, or may not, leak in the next few days before the election.

If the back and forth clearly shows intent (to mislead), then we’ve got a 100 percent smoking gun:

the whole Clinton (cash) machine narrative – according to which Hillary just deleted "personal" emails – crumbles like the ultimate House of Cards.

Moreover, that would unveil what was from the start the privileged Clinton machine strategy:

to thwart the subsequent internal State Dept. and FBI investigations.
As far as the Clinton machine is concerned, an interlocking influence peddling pile up is the norm.
John Podesta also happens to be the founder of the Center for American Progress – a George Soros operation and prime recruiting ground for Obama administration officials, including US Treasury operatives who decided which elite Too Big To Fail (TBTF) financial giants would be spared after the 2008 crisis.