Inspector General Neil Barofsky: The BAILOUTS for Goddamn-Sachs, JP Morgan, Citi-bank, & other Wall Street Banks "WAS A HUGE BOONDOGGLE for Taxpayers," SOLD ON THE BAIT-&-SWITCH of HELPING Homeowners hold on to their mortgages, when in fact the banks did the OPPOSITE: going on a JIHAD to EXPEL thousands of American families from their foreclosed homes....

In the below video,  The Daily Ticker financial correspondent Aaron Task interviews Neil Barofsky,   the U.S. government Inspector General over the "T.A.R.P."  bailouts:


Mr. Barofsky states that the bank "bailouts" were basically sold to Con-gress as a BAIT-and-SWITCH - Con-gress authorized the "T.A.R.P. bailouts" requested by President George W. Bush's then Treasury Secretary (and former Goddamn-Sachs Chairman) Hank Paulson,  with the understanding that the bailout money would be used to assist home owners - mortgage holders - hold on to their homes, which would prevent those homeowners defaulting on their mortgages and ruining the big banks which would, without the 'bailouts,' take the losses and go bankrupt.

Instead, the Big Banks kept the loot from Con-gress, and went on a virtual jihad to expell as many American homeowners from their oversold, "underwater" homes as they possibly could, ofen using FRAUD and DECIET to do so...

"It was somewhat shocking... to find out just how much control the Big Banks had OVER THEIR OWN BAILOUTS... how much deference was show by Treasury [Department] official over the big banks."

"From 2008 to 2011, I was told constantly by Treasury officials that we didn't have to worry about those things, because the banks would never embarrass themselves, they would never risk their reputation  [by perpetrating frauds or other financial crimes]."
"There was no difference on core issues between Bush and Obama.."

below:  Tim Geithner, on the left, today's so-called "Democrat" President Barack Obama's TREASURY SECRETARY,   was working as George W. BUSH'S    APPOINTEE as President of the  New York 'Federal' Reserve bank, where he  was working hand-in-glove with Hank Paulson to first HIDE the TITANIC ACCOUNTING FRAUD that made the September 2008 financial meltdown inevitable,  then working with Paulson to  make the bailouts a "BLANK CHECK" for the failed, bankrupt, insolvent, corrupt, but Con-gress, presidents,  and other politicians bribing bankers - now empowered to bribe more politicians, with tens of billions upon trillions of dollars of looted-from-taxpayer 'bailouts' money.... 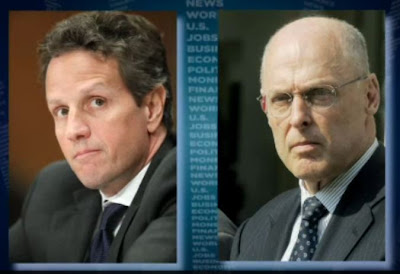 bonus:   With  REPUBLICAN and "Democrat" administrations, and Con-gressional 'leaders,'   often indistinguishable when it comes to providing a WHITEWASH for FINANCIAL CRIMES perpetrated by Wall Street bankers...

...it is beyond tragic that millions of Americans have been conned and deluded, to not realize that the "BAILOUTS"  are nothing but SOCIALISM ,
SOCIAL WELFARE   for the wealthy and their failed, con-gress bribing banksters...

Says not only innumerable financial writers (and here, here, here, and here,  with former Golddamn-Sachs Managing Director Nomi Prins recently totaling the "bailouts" handed over to Wall Street at a more modest $9.2 trillion... but see her "PILLAGE PEOPLE"  pdf  for names, dates, bailouts amounts, and how much the bailouts-taking banksters paid themselves in 'bonuses" !! ).... but  also the same Mr. Neil Barofsky, way back in 2009, in his landmark  survey of the "bailouts" comment written up in this July 2009 Bloomberg financial news story:


"...The real reason the tax loophole for private equity mavens must be closed once and for all is that American taxpayers subsidize the private-equity industry -- and its outsize paychecks -- and simple fairness demands that they don’t also get an additional break in the form of lower tax rates.
Mitt Romney, the co-founder of Bain Capital LLC and the leading contender for the Republican presidential nomination, got blindingly rich because of this taxpayer subsidy, and it isn’t right that he and his cohort can also pay taxes at a 20- percentage-point discount compared with the rest of us.

Here is how the subsidy works: The Internal Revenue Service allows for the tax-deductibility of interest expense on corporate debt. Since corporate debt is the mother’s milk of a leveraged buyout, there would be no private-equity/LBO industry without this huge tax benefit. Indeed, anyone who has used an Excel spreadsheet to model a leveraged-buyout -- you know who you are! -- knows that the magic of the entire industry depends almost solely on the interest-expense provision in the tax code..."   (cont'd)     =======================================


SOCIALISM FOR THE RICH - taxpayer extorted trillions of dollars, for the treasonous, larcenous, economy-wrecking, Con-gress bribing plutocrats and kleptocrat traitors.... 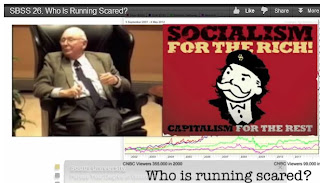