Jewish Financier George Soros learned Predatory/Parasite Finance at an early age: as a teenage adopted "non-Jew", Soros helped HUNGARIAN NAZIS Catalogue and SEIZE Hungarian Jewish property... before those Jewish familes were sent off to Auschwitz and other Nazi death camps.

....in which George Soros describes the year (1944) during which his Jewish father handed the young, 14 year old George over to be adopted by a non-Jewish Hungarian "godfather" so to avoid deportation to the death camps.

Soros then accompanied his new, adoptive father on visits to Jewish homes and communities, where Soros and his parent catalogued Jewish property, in prelude to those Jewish families being deported to death camps.

In the below snippet, we transcribe Soros's stunning comments from that interview:  Soros is describing a TEENAGE POWER TRIP,  where he was a teenage sidekick to a powerful athority figure... and Jewish families literally and physically CRINGED in fear when Soros and his adoptive father showed up, to catalogue the possessions of those Jews, as a prelude to the Hungarian authorities loading those Hungarian Jews on to trains to be transported to Nazi run death camps in  Southern Poland:

Soros:
"It was actually probably the happiest year of my life, that year of German occupation. For me, it was a very positive experience, it was a strange thing, you see incredible suffering around you, and in fact you are in considerable danger yourself.
But you are 14 years old, you don't believe, it can actually touch you. You have a belief in yourself, you have a belief in your father, it's a very... happy-making [sic] exhilerating experience."

Well fed and well clothed - if dispossesed and terrified - Hungarian Jews arrive at the Auschwitz death camp in mid/late 1944.  These victims had been friends, neighbors, and co-religionists of the young George Soros in the pre-Nazi occupation years in Hungary: 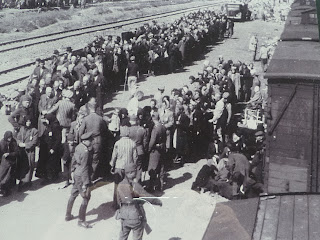 Throughout the Nazi era, and throughout history, Jews have been like any other peoples occupied by larger, more powerful invaders and conquering armies: a Mafia like "elite" develops, that collaborates with the conquerors/invaders, selling their own people into slavery or death, in order to maintain a core command structure, collaborationist nobility, or nationalist power elite.
See the Anglo/Saxon nobles  (and commoners)  first resisting, then cooperating with, then finally absorbing the elite Norman conquering invaders after William the Conqueror's invasion of England in 1066.

Indeed, the Sicilian Mafia arose because (as George C. Scott intones, as General George S. Patton,  in the movie "Patton") Sicily had been one of the most conquered lands in all of history, creating a ruthless core of "hard men" who could both comply with the invaders, and resist them, as circumstances dictated.

George Soros is a "JUDENRAT" - Nazi death-camp COLLABORATER  in this mold, and as his 60 Minutes video transcript details, he found it "EXHILARATING" to be AN EMPOWERED teenager, with people literally cringing in fear and despair at his presence.


Anyone who believes George Soros is "liberal" IS DELUSIONAL -  not only is he a Neo-Con/Likudnik Jew right  out of the Emanuel/Shamir/Netanyahu  "exterminate the Palestinian 'terrorists' (refugees) - then do it again!"  Irgun textbook, but he is a ruthless authoritarian straight out of the "Judenrat" ruthless Jewish holocaust COLLABORATOR mold - his ideas on "pre-crime" and computerized, electronic surveillance take up where the Gestapo, KGB,  Stazi, (or Spanish Inquisition and Atlantic slave trade) left off.
Posted by verifi at 12:43 PM