Would the Jewish people of America, Europe, and the Mideast please stop making an honest man of Hitler & his Nazi "anti-semitic"mid-1930s propaganda?

"Scenes we've seen before" - as Irish men, women, and children were starving to death  by the tens-of-thousands during the "Great Famine" 1845-1852, wealthy British  bankers - foremost among them the Rothschilds -  were building themselves monstrous new mansions  partially financed by "profits" extorted from Irish rents & hijacked, "privatized") fertile Irish estate's grain exports  -
﻿ ﻿   below -    Jewish  Fed Chairman Ben "The Swindler"  Bernanke  - dishing out  TRILLIONS of dollars in "bailouts," "liquidity injections,"  "backstops," "guarantees," "QUANTITATIVE EASING" and other  cheap excuses to PRINT MONEY for his GS, JPM, Citi, and other banking crony friends (and  the closely related  Jewish (israel) War Lobby)   while millions of Britons, Europeans, and Americans on limited incomes  face  freezing winters with little or no heat....
Bernanke the economy-gutting genocidal Fed "banker" &  financial swindler: 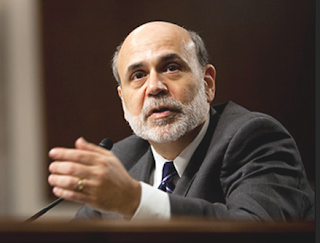 (bloomberg)  "Fed Witholds Data on Collateral for $885 Billion in Financial-Crisis Loans"
(i.e. Bernanke has GIVEN AWAY  hundreds of *BILLIONS* of  dollars of   "good money" for  the SHEER GARBAGE, worthless,  s***   "securities"   that his gs/jpm/citi  pals are trying to unload  from their fraud saturated books and portfolios. Bernanke's ONLY concern, is for  the taxpayer extorted  "profits" of the gs/jpm banking cartel - the U.S. and world economies be damned.)
The results of the Fed/GS/JPM/  relentless DEFRAUDING of the people of America, England, and Europe:  millions of now impoverished citizens forced to face a freezing winter with little to no social support.

(note: for 200 years,  since at least when Nathan Rothschild funded Wellington's  British army  & Britain's allies in their  victories over Napolean in the "Peninsula Campaign" in Spain 1808-1814 and at the Battle of Waterloo
(Nathan purchased the East India Tea Company's entire stock of gold bullion and silver that  the rapacious  British had extorted out of India, and used that money, smuggled through Napoleon's Europe blockade,  to fund and supply Britain's allies in Spain, Austria, Prussia, Russia, etc.)
..."the City of London" British financial district (and indeed the entire British empire!)    has been synonymous with the Rothchilds multi-national zionist banking cartel.   For over 100 years,   J.P. Morgan,  Chase Bank (the Rockefeller bank is now part of JP Morgan-Chase bank), Citi Bank (the chief NY competitors of  the Rockefeller's bank), Lehman Brothers (a Jewish bank originated by the Jewish slave owning Lehman brothers  in the slave owning Deep South before the Civil War), Golddamn-Sachs,  Kuhn-Loeb, the Warburgs, and other Anglo/German/'American' banks have all been  part of the American arm, or "front," of the multi-national R's very zionist banking cabal.)

"BRITAIN IS FREEZING TO DEATH"- U.K. Express
"MIDDLE class families are among millions of Britons who cannot afford to heat their homes this winter, as elderly ride on buses all day to stay in the warm.
After a week of snow and freezing temperatures a shocking picture has emerged of the bleak months ahead for 5.5 million households.
Pensioners, who are among those most ­vulnerable to the cold, are resorting to ­extraordinary measures to keep warm.
Many have been using their free travel ­passes to spend the day riding on buses while others are seeking refuge from the cold in libraries and shopping centres.
Dot Gibson, spokeswoman for pressure group the National Pensioners’ Convention, said: “Now that we have one of the coldest winters, older people are going to have to make the unenviable decision whether or not to put the heating on. The Government should guarantee that they won’t cut the winter fuel allowance.”
The death toll from the big freeze rose to seven yesterday. They included two men who were killed in a crash on the M62 in Humberside and two teenage girls who died when their car collided with a Royal Mail van in Cumbria.
The winter death toll is set to rise steeply as official figures show that nine elderly people died every hour because of cold-related illnesses last year. The number of deaths linked to cold over the four months of last ­winter reached nearly 28,000..."  (cont'd)
http://www.express.co.uk/posts/view/215510/Britain-is-freezing-to-death

Far from having the "Conscience of a Liberal"  as his recent book title claimed,  Mr. Krugman is now just a typical, soulless, NY, DC, Ivy League Neo-Con  radical right-wing economic commissar apparatchik,  pushing & whitewashing  extortion , bailouts fraud,  and propaganda lies.   As we pointed out, above,  "Who needs death camps and work gulags, when you can just freeze people to death in their own homes  and towns by killing their jobs & economy and sabotaging their social safety net?"   under the Right-Wing propaganda whitewash mantra of  "FREE MARKETS," when actually  Wall Street bankster extortionists  GO RUNNING to  CONGRESS and  The Fed for  TAXPAYER SOCIALIZED  "bailouts"  every 5 minutes!?! 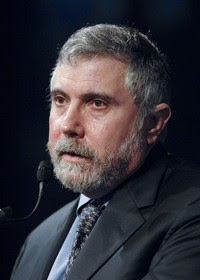 The caption for this Bloomberg photo of Krugman states
"Krugman says Iceland may be an example of “bankrupting yourself to recovery”"
http://www.bloomberg.com/news/2010-12-02/iceland-bankrupting-self-to-recovery-reveals-policy-ireland-dared-not-take.html
but Krugman, Bloomberg, the (Sulzerger family owned) New York Times, and the other American "mainstream" press/media outlets  rarely mention that the multi-national bankers and vampire blood-sucking, credit extortion "bond holders" have  IMPOSED  "BAILOUTS" on the people of Iceland (and Ireland, Greece, Portugal, Britain, and of course the United States, etc.)  for the VERY PRIVATE losses, FAILURES, and BANKRUPTCIES, of the very PRIVATE  banking cartels.
Just as Queen Victoria once labeled  democracy for Ireland a "communistic" proposition, so to whitewash her country's genocidal extortion and murderous ethnic cleansing of that downtrodden, British army occupied  country,   so too today do the Jewish owned media outlets in New York and America whitewash, and rule out, the prospect that public citizens and American taxpayers  should NOT have to pay for the  very PRIVATE BANKING FAILURES of the criminally run Fed/gs/jpm/rothschilds banking cartel - the GENOCIDAL, mass-murderous banksters who wallow in ill-gotten,  taxpayer extorted "bailouts" BONUSES, as they crush and kill the American economy & social safety net that took 100+ years of blood, sweat, toil, tears, and sacrifice to create.
below,   Terrific cartoon video / pictoral explanation of how the "Vampire bankers" loot,  plunder and destroy the entire world economy while killing  tens upon hundreds of thousands of jobs - needless to say, Golddamn-Sachs, the prototypical "vampire squid" bank,  is and has always been a Jewish owned bank,   even if they hire gentile WASP (White Anglo Saxon Protestant) front-men like Hank Paulson and Mark Patterson (and Jamie Dimon over at JPM)  to do some of the dirty work for them.
Indeed, U.S. presidents Bill Clinton, George W. Bush, and Barack Obama, and British Prime Ministers Tony Blair and his replacements,  are effectively nothing more than hired front-men for the murderous GS-JPM (+ Citi, BoA, etc.)  treasonous  vampire squid banking cartel.
The Fed,  JP Morgan, and Golddamn-Sachs ARE SYNONYMOUS, they are all three the same entertwined  & interconnected (via the Fed) "vampire squid" banking cabal bankers -
- GS & JPM are member-owner banks of the Federal Reserve,  Ben Bernanke is merely their hired economic-hit-man front-man,   they are parasites who make TRILLIONS of taxpayer extorted "bailouts"  dollars DISAPPEAR into thin air - as the below video  so artfully  illustrates.
(That's why, even after they have been "bailed out,"  they always come back seeking new,  more extensive bailouts.)
Posted by verifi at 8:08 PM