unleash their "FALSE FLAG" NUCLEAR BOMBS
to wipe out a few selected American cities...
(to be BLAMED on RUSSIANS, IRANIANS...
or "WHITE SUPREMACIST AMERICANS" of course!)

...this is  THE PRICE AMERICANS WILL PAY
for NOT BRINGING the MASS-MURDEROUS
9/11  "DEEP STATE" ISRAELI, MOSSAD, AIPAC,
& big-finance PERPS to justice

and KILLING MILLIONS of MUSLIMS
in the EVIL JEW WARS ever since....


Well, we hate to be the bearers of bad news, but what were once clearly "EXTREME FRINGE" "conspiracy theory" stories NOW HAVE THE GRIM,  COLD,  HARD CUTTING EDGE of TRUTH to them... and AMERICANS KNOW that the FEMA which was AWOL saving NEW ORLEANS RESIDENTS from the FLOODING that RESULTED WHEN THE LEVEES BROKE - as EVERY EXPERT HURRICANE & DISASTER expert PREDICTED THEY WOULD when Hurricane Katrina WAS STILL SWIRLING IN THE GULF OF MEXICO....

...well, BY NOW YOU HAVE TO BE
a  COMPLETE, STUPID IDIOT
to think that FEMA
or  the EVIL JEWS RULED u.s. GOVT.
GIVES A DAMN FOR YOU any more than THEY

(or you!) GIVE A DAMN FOR PALESTINIANS
KILLED by U.S. SUPPLIED BOMBS
in what is CLEARLY an EVIL JEWS
FIVE DECADES+  ON-GOING  GENOCIDE EXTERMINATION operation in Occupied Palestine...

...NOW BROUGHT BY JEWS, like it was in "JEWISH UKRAINE" and "JEWISH RUSSIA"  here to JEWISH BRITAIN and JEWISH AMERIKA...

don't say we didn't warn you!


Astonishingly, horrifyingly, and perhapscounter-intuitively... he is absolutely correct.

JEWS VIEW NON-JEWS as SUB-HUMANS, and VIEW IT AS THEIR RELIGIOUS DUTY to DEFRAUD, EXTORT, SUBJUGATE, ENSLAVE... and, ultimately, as in PALESTINE, Armenia, SYRIA, YEMEN, Iraq, and soon enough IRAN, and in the "communist"  "soviet union"
EVIL JEWS HIJACKED  Russian empire
GULAG DEATH CAMPS, to EXTERMINATE any and everyone around them....


EVIL JEWS' PLANS to MAKE UKRAINE
in to a "SECOND ISRAEL" - where -
like in OCCUPIED PALESTINE,

the FIRST ORDER OF BUSINESS is to KILL, 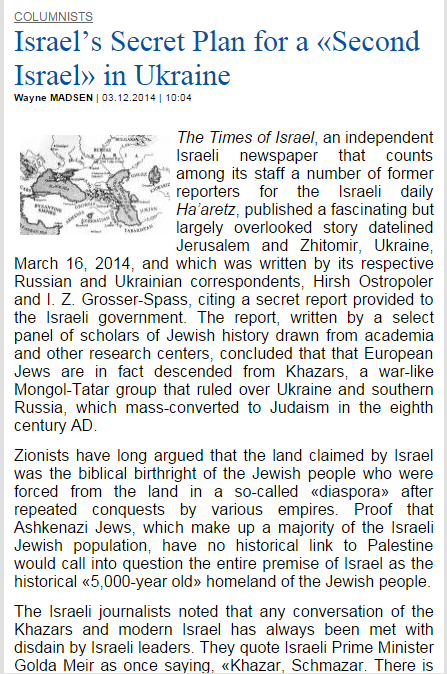 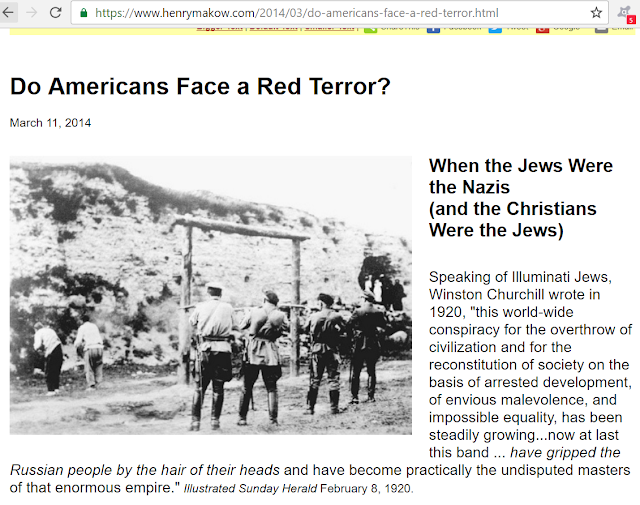 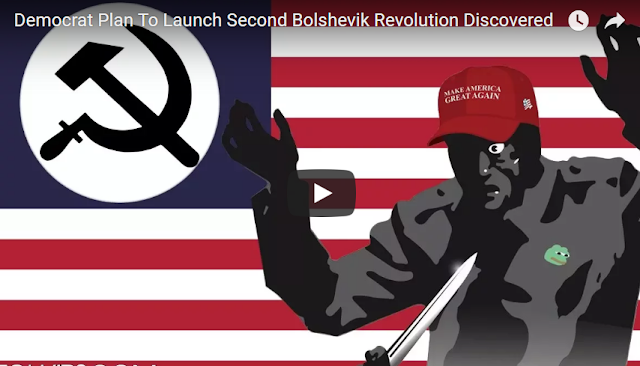 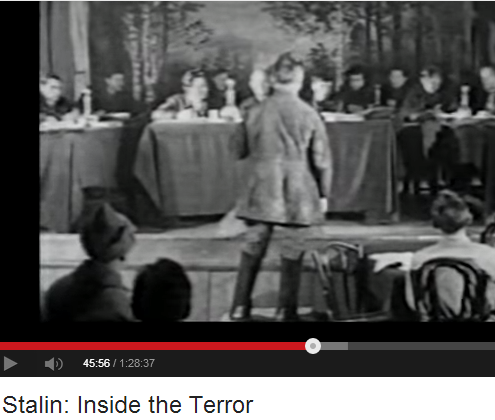 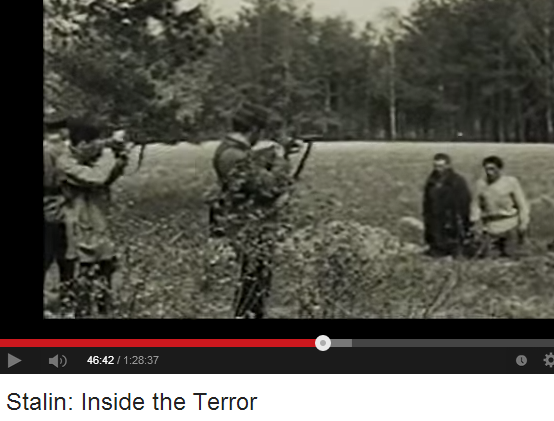 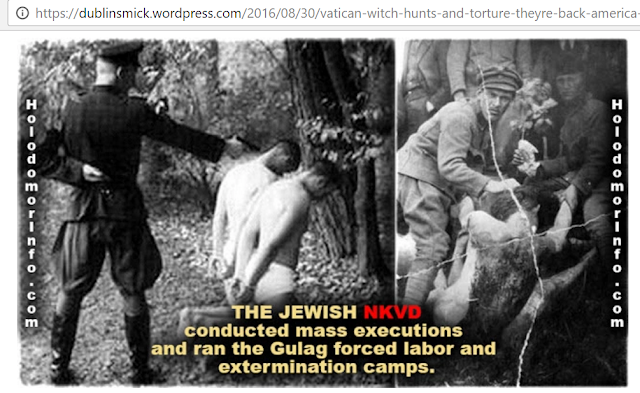 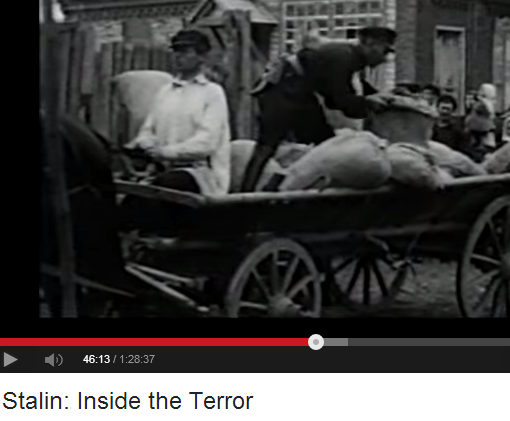 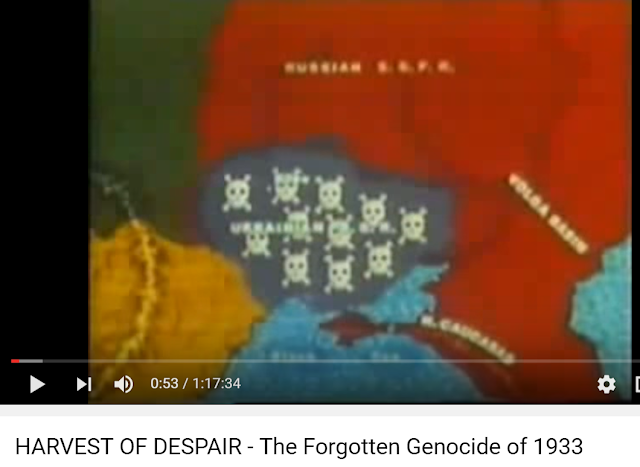 below text from above screen-shot:
IT IS NOT OUR "conspiracy theory" IMAGINATION!
the EVIL JEWS at the
SULZBERGER family owned,
RACIST, GENOCIDAL, JUDEO SUPREMACIST
B'NAI B'RITH on the Hudson
NEW YORK TIMES
WHITEWASH  to this day
the MASS-MURDERS,
INTENTIONAL FAMINES,
and TERROR PURGES
of the "Communist" era in the "soviet union"...

BECAUSE THOSE EVIL TRAITOR JEWS
WANT TO BRING that HORRIFIC,
NON-JEWS "humans"
AS VERMIN TO BE EXTERMINATED
ABSOLUTE TYRANNICAL INSANE SADISM REGIME

Solzhenitsyn’s stories about NVKD officers coercing confessions from innocent prisoners by crushing their testicles underneath the officer’s jackboot are ghastly to even try imagining.

So too the mass executions carried out by binding, gagging, and burying prisoners alive, because it was more efficient than shooting them first.

However, it is difficult to fully comprehend for Westerners who have not experienced immense and continuous physical pain.  Thus, it is also worth considering the damage done to the human soul beyond the gulags…

…One hundred years later, there are still some efforts to whitewash the terrible legacy of communism, and reflexive repulsion toward communism has not been engrained in Western culture like that toward fascism.

The NEW YORK TIMES  published 39 articles on the “RED CENTURY” THIS YEAR,

It mentions the gulag system in only two of those articles, and simply as asides. One in five social science professors identify as Marxists,

and they have foot soldiers in the violent “Antifa” movement. Socialism has become more popular than capitalism among Democrats and young Americans.

The far-left insists it is a pointless exercise to remember historical aberrations perpetrated by Lenin, Stalin, Mao Zedong, Pol Pot, the Kims, the Castros, and so on. None of it was “true communism,” anyway. But all the crimes perpetrated by dozens of communist regimes in dozens of countries over 100 years that touched more than a billion people suggest a pattern. Karl Marx was a false prophet, and the proof is in the tens of millions killed by those who espoused his ideology. Communism was murderous in practice because it was murderous in theory -


i.e. IDENTIFY an "ENEMY of PROGRESS,"  any and all "ENEMIES of the PEOPLE" i.e. ENEMIES of the PARTY! - and then HUNT DOWN, DEMONIZE, DEHUMANIZE, EXTERMINATE, ERADICATE, & LIQUIDATE them... IN THE NAME OF "the people" OF COURSE!! 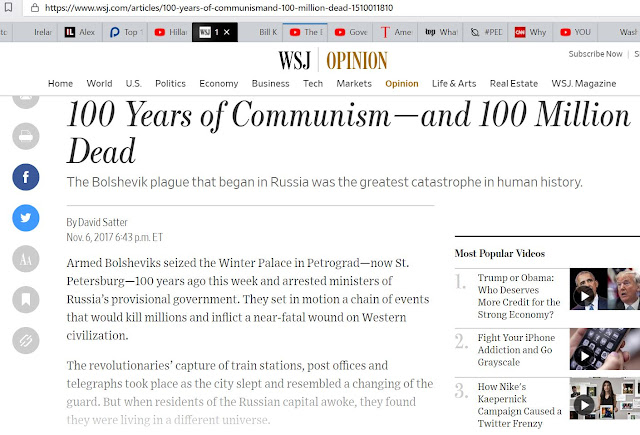 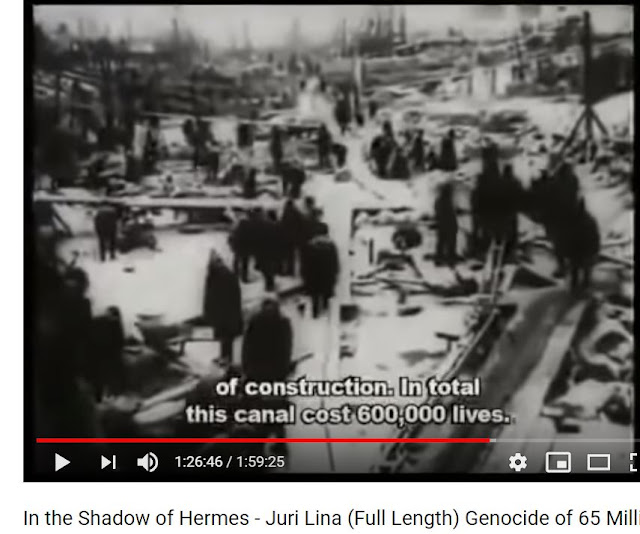 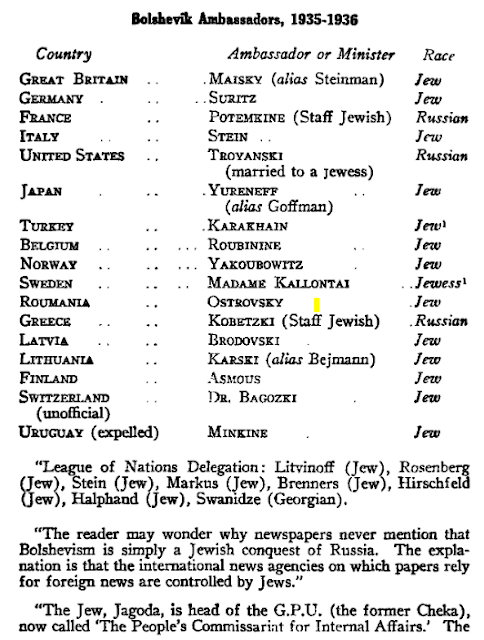 
we, unfortunately, regrettably, to our horror...
FULLY AGREE WITH HIM,
the JEWS WERE FAR MORE
MASS-MURDEROUS than
THEY EVEN ACCUSED
Hitler and the Nazis of being! 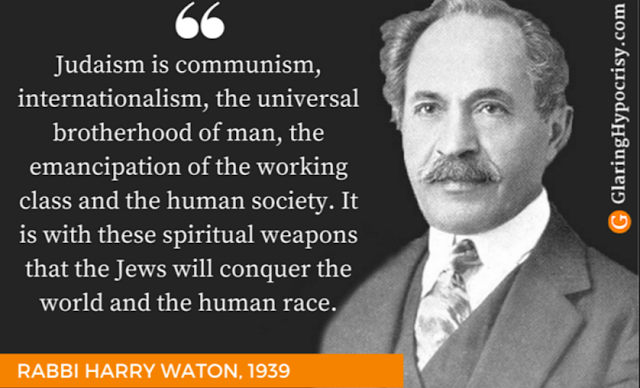 SEVER PLOCKER -
JEWISH writer in JEWISH Y-net 'news'
writing from  EVIL JEWS CONQUERED
& OCCUPIED JERUSALEM
unequivocally states:  STALIN'S JEWS were among THE MOST MASS-MURDEROUS sons-a-bitches in the ENTIRE BLOOD-DRENCHED 20th century...
and THEY,  THE EVIL PIGS or their direct offspring ARE TRYING TO UP THE ANTE
of the 100 MILLIONS MURDERED body-count here in the onrushing destruction 21st century... 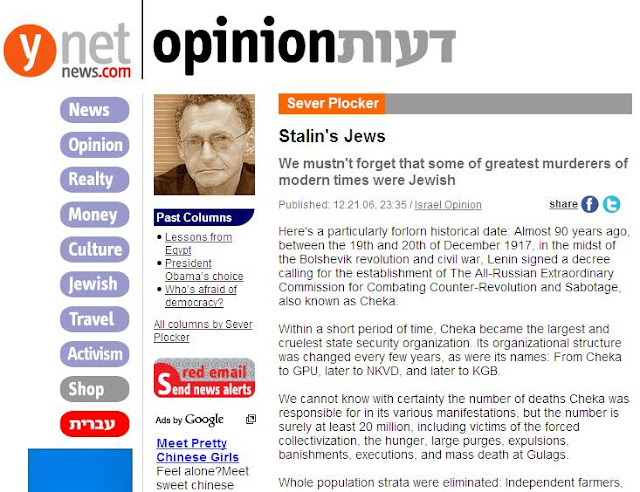 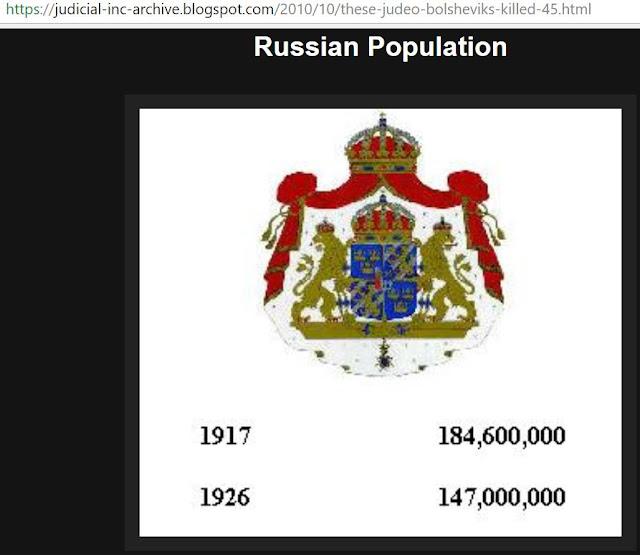 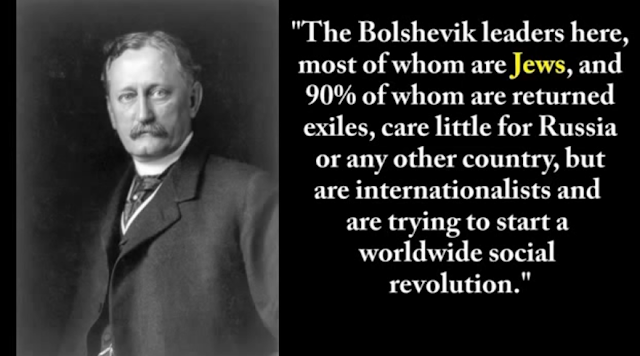 "COMMUNISM" is merely
a MASK  for GENOCIDAL,

who AIMED to their HIRED COMMISSARS'
BRING MASS-MURDER TERROR PURGES,
INTENTIONAL FAMINES,
and DEATH-CAMP GULAGS RIGHT TO EUROPE...
AND to AMERICA!
until Hitler & the Nazis revived German nationalism
for long enough to delay them for a few decades... 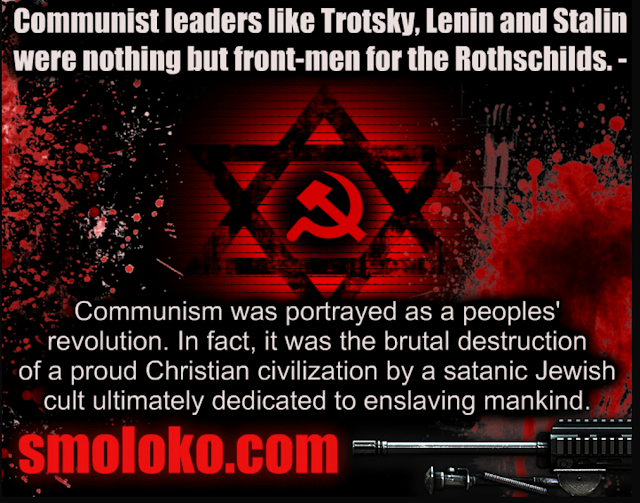 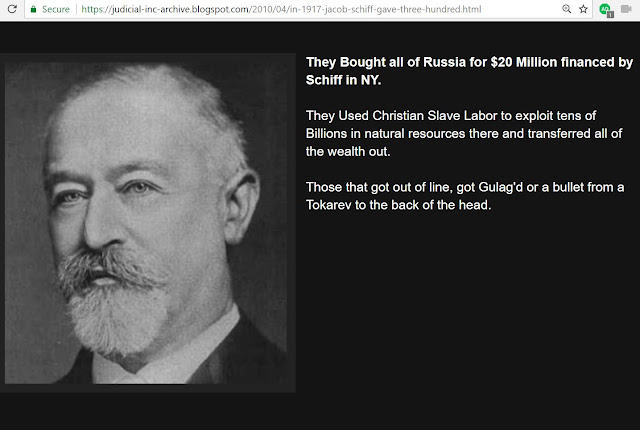 TROTSKY was a HIRED HIT-MAN,
and JEW  MILLIONS KILLED
DEATH SQUAD LEADER
under JACOB SCHIFF,
who was the ROTSCHILDS LEAD LIEUTENANT
in Americain the late 1800s and early 1900s...

CHURCHILL ACKNOWLEDGED that the BLOODY, MASS-MURDEROUS RULERS
of "soviet communism" IN BOLSHEVIK JEWS CONQUERED RUSSIA were.... MOSTLY JEWS!
But he TRIED to make  a FALSE DISTINCTION between "GOOD ZIONIST JEWS" and "BAD BOLSHEVIK (communist) JEWS" -
JUDAISM IS AN ABSOLUTE "EXTERMINATE THE GOYIM" DICTATORSHIP,
which AIMS TO CONQUER & EXTERMINATE those around them...
COMMUNISM was MERELY A MASK to make GENOCIDAL TALMUDIC JUDAISM seem "modern" and "FOR the progress of humanity" 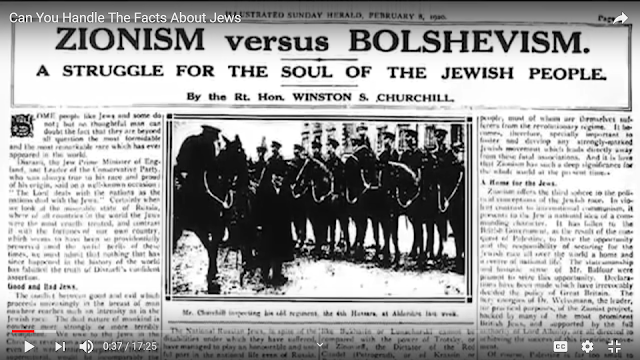 WHUPPS!  ANOTHER JEW RABBI - ACKNOWLEDGES that COMMUNISM IS JUDAISM! 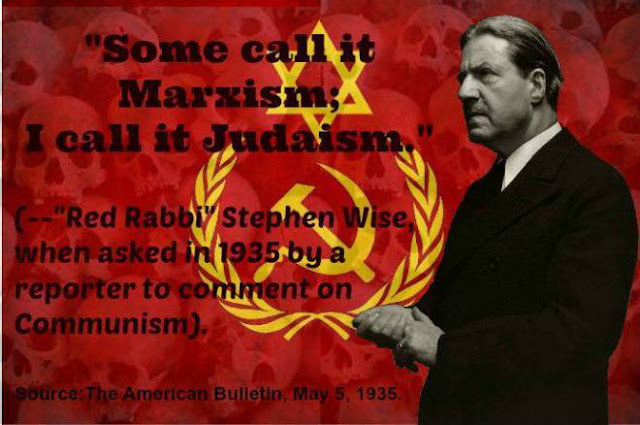 "CHILDREN ORPHANED in the 1931-32 FAMINE were KILLED IN SLAUGHTERHOUSES....their flesh SOLD FOR MEAT" =


THE SATANIC DEATH CULTS
HERE IN AMERICA are DOING THE SAME
to TENS OF THOSUANDS of CHILDREN EVERY YEAR - TODAY, NOW, AS WE SPEAK!!


AMERICANS WILL DESERVE what is COMING DOWN THE PIKE AT THEM for their sad, vile, apathy, IGNORANCE, & COMPLICITY in all these evil CRIMES & HORRORS! 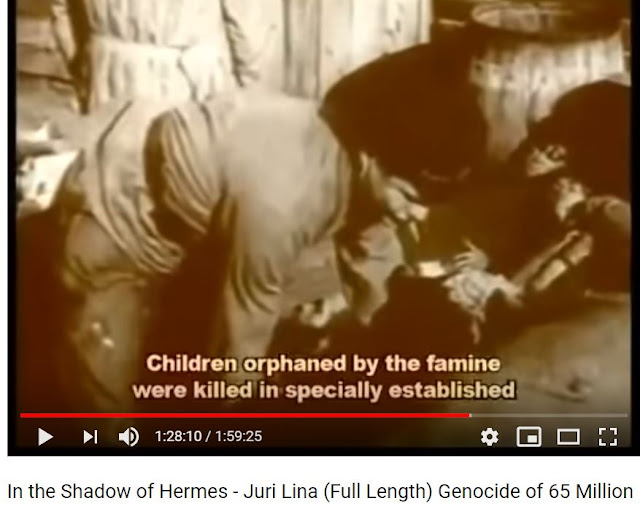 COULD IT BE TRUE?
COULD the EVIL JEWS
ORCHESTRATED, COORDINATED,
and DIRECTED 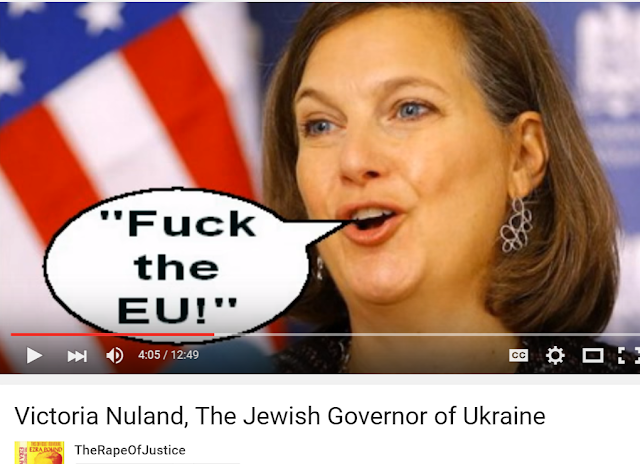 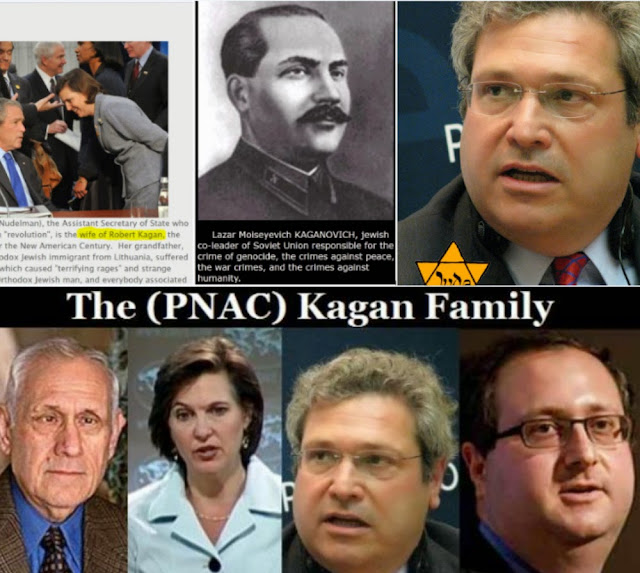 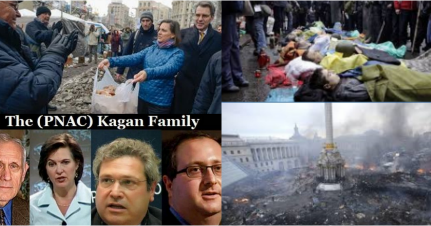 Or of UKRAINIAN UKRAINIANS!  JEWS HATE BOTH sides, even as they USE UKRAINIANS to KILL RUSSIANS for them!