JEWS USE HATE SPEECH - "IRAN IS TO BLAME!" - to JUSTIFY CLIMBING IN BED with their HOUSE OF SAUD DEGENERATE Arab PUPPET SLAVE REGIME to EXTERMINATE YEMEN CIVILIANS... so the EVIL JEW BILLIONAIRES CAN STEAL YEMEN OIL through their Saud Arab proxies! 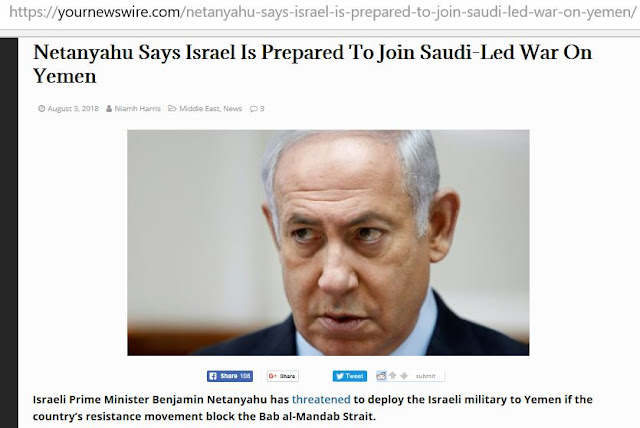 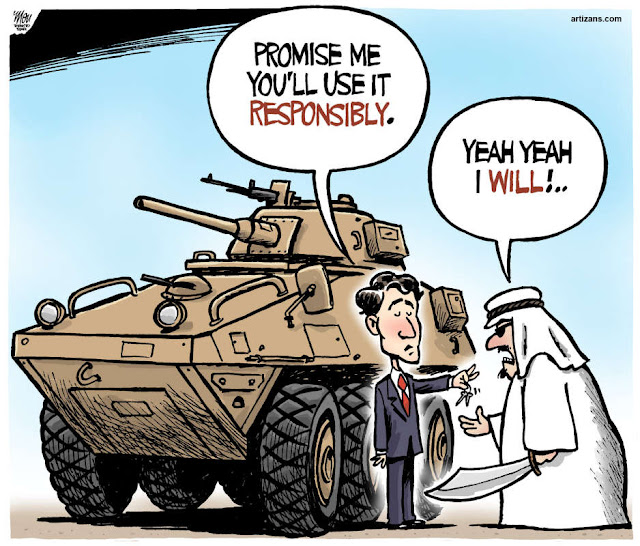 or "IRANIANS!" to EXTERMINATE
YEMEN CIVILIANS who DON'T WANT THEIR OIL
STOLEN by CHILD-RAPING SAUDI OLIGARCHS -


THE ONLY POINT-OF-VIEW TOLERATED by the WHORE  U.S. corporate Media is the ZIO-NAZI, SATANIC  JEWS' p.o.v.!!!


Israeli Prime Minister Benjamin Netanyahu has threatened to deploy the Israeli military to Yemen if the country’s resistance movement block the Bab al-Mandab Strait.
The strait is under the de facto control of Yemen’s Houthi Ansarullah movement.
Speaking at a navy ceremony late on Wednesday, Netanyahu warned against any attempt to block the Bab al-Mandab strait that connects the Red Sea to the Arabian Sea and has the potential to be used as a “chokepoint” on global oil trade
Approximately 4.8 million barrels of oil pass through the strait every day, according to the U.S. Energy Information Administration
Last week, Saudi Arabia said it was suspending oil shipments through the strait, on the main sea route from the Middle East to Europe, after Yemen’s Houthis attacked two ships in the waterway.
Netanyahu, however, claimed that its military action would be targeting Iran which has never made an assertion of trying to intervene in the strait.

Mint Press News reports: Netanyahu has shown his willingness to use Iran’s alleged presence as a pretext for military action anywhere in the region, particularly when the true motives for military escalation would prove more difficult to justify.

The Saudis have asserted that the vessel were oil tankers while Yemen’s government has claimed that they were Saudi warships. Some analysts warned at the time that the temporary suspension, and the associated rise in oil prices, could provoke an escalation of the conflict by spurring increased involvement from foreign powers seeking to assist the Saudi-led coalition in the three-year-long conflict.
Netanyahu — falsely claiming that the Houthi rebels, who comprise a major part of the Yemeni resistance movement Ansarullah, are working at Iran’s behest — stated that:
“If Iran will try to block the straits of Bab al-Mandab, I am certain that it will find itself confronting an international coalition that will be determined to prevent this, and this coalition will also include all of Israel’s military branches.”
Using Iran as a pretext to quash Yemeni resistance
However, there is a problem with the Israeli government’s assessment of the situation, as Iran has never threatened to block Bab al-Mandab, instead recently threatening to block the Strait of Hormuz and halt trade in the Persian Gulf were the U.S. to make good on its threat to prevent Iran from exporting its own oil. Furthermore, Iran has no control over what Yemeni rebels do with Bab al-Mandab largely because the Yemeni resistance fighters are not the “Iran proxy fighters” that international media so often claim them to be. Indeed, the U.S. State Department has even admitted, in leaked cables, that the Houthis were not an Iran proxy and that they received neither funding nor weapons from Iran.
Yet, given that both the Houthi movement and Iran are largely composed of Muslims from sects of Islam that have historically been oppressed by Sunni-majority governments — Zaydi and Shiite, respectively —


international media and calculating politicians alike have since invoked that commonality to FALSELY CLAIM that the Houthis are proxies of Iran, DESPITE A LACK OF EVIDENCE showing that to be the case.


In addition, the Houthi movement in Yemen has attracted a host of followers from many different sects of Islam — including Sunnis, Shiites and Yazidis — as the movement is MORE ANTI-COLONIAL & GRASS-ROOTS IN NATURE rather than being built upon the religious affiliations of its members.

Netanyahu’s new stance fits a pattern, as Israel has recently used CLAIMS of alleged Iranian military attachments in countries like Syria AS JUSTIFICATION for AIRSTRIKES & BOMBINGS against those nations despite evidence indicating that there are no Iranian soldiers present in the areas being targeted.


Netanyahu, in making the same case for Israeli military involvement in Yemen, shows his willingness to use Iran’s fabled presence as a pretext for military action anywhere in the region, particularly when the true motives for military escalation would prove more difficult to justify.
In joining the war, Israel would share responsibility for a worsening crisis in Yemen
An international coalition has been fighting against the Yemeni resistance movement since 2015. That coalition is nominally comprised of Saudi Arabia and the United Arab Emirates but receives assistance from the United States and the United Kingdom.

The resulting war that has been waged by "THE COALITION" against Yemen has led to THE CREATION  of the world’s WORST HUMANITARIAN crisis...

[FAR FROM BEING HUMANITARIANS, the "globalists" LOVE WHIPPING UP WARS &
"HUMANITARIAN CRISIS" aka SLOW-BURN GENOCIDE EXTERMINATION CAMPAIGNS  against disposable colonial PEONS "in the way" of IMPERIAL ZIO-NAZI "progress"!]


...resulting from the coalition’s de facto BLOCKADE of  rebel-controlled Yemen and its bombing of key civilian infrastructure. Those measures have led to mass starvation and history’s largest cholera outbreak, among other dire consequences

[The JEWS in U.S. media WHO ACCUSE TRUMP SUPPORTERS of  "HATE SPEECH!" and "being RACISTS!"
SUPPORT A GENOCIDAL WAR
that is KILLING, MAIMING, & MURDERING THOUSANDS of YEMEN CIVILIANS AS WE SPEAK!
GOD DAMN the MEDIA PRESSTITUTE  LIARS
& their SATANIC ZIO-NAZI OVERLORDS!]
Netanyahu’s recent statements suggest that Israel would be joining the existing coalition were it to decide to involve itself in the Yemen conflict. Given Israel’s support for countries involved in genocidal wars in the past and its own treatment of Palestinians, it is unlikely that Israel’s government would feel constrained by any moral dilemmas if it chose to join the coalition’s war in Yemen despite the humanitarian crisis that war has provoked.

Furthermore, Israel’s entry into the Yemen conflict is made more likely by Israel’s increasingly close relationship with Saudi Arabia

[the JEWS DON'T GIVE A RAT'S ASS for DEMOCRACY or HUMAN RIGHTS!
THE HOUSE of SAUD is THEIR PUPPET, CYRPTO-JEWS,  PROXY GENOCIDE KILLING REGIME!]

and the fact that the Saudis have been unable to win militarily against Yemen’s rebels, despite superior firepower and funding.


"From the Saudis’ perspective, Israel’s involvement in the war  could be seen as the edge the coalition needs to start making tangible military gains."


TRANSLATION:
DESPITE being given BILLIONS of dollars
in the BEST U.S. jet aircraft, bombs, missiles & other
WEAPONS FOR SALE by the AIPAC,
JEW WAR LOBBY PUPPET WHORES in CONGRESS,
in the Senate, at the White House, and IN ALL "U.S." GOVT. AGENCIES including the CIA & WAR DEPARTMENT....

..so the NETANYAHU LIKUD JEWS
(the ROTSCHILDS controlled SATANIC jews!)

...WITH THE BLESSINGS of  the JEW BILLIONAIRES OWNED  corp. WHORE MEDIA here in America...


the SAME MEDIA WHORES who accuse AMERICAN NATIONALISTS who are against OPEN BORDERS of being "RACISTS!" & using "HATE SPEECH!"

...and with the APPROVAL of all the JEW BILLIONAIRES BOUGHT & OWNED CONGRESS, SENATE,
Demorat & Rethuglican,
cia, DoD, DoJ,  and all the other
govt. agencies WHORES as well,  OF COURSE !!

THE INSANE JEWS are WAGING WAR ON HUMANITY
ALL ACROSS the god-damned world - and CLUELESS AMERICANS DON'T HAVE A CLUE!
much less can we keep up with a WORLD FULL
of ENGINEERED ATROCITIES and slow-burn genocides
perpetrated by the insane SATANIC MASTER "self chosen TO BE GOD" master race!


WELL, the "good news" out of this
UNFOLDING HORROR-FEST of SATANIC JEWS'


ENGINEERED GENOCIDE in YET ANOTHER COUNTRY....

is that FINALLY THE INSANE JEWS
ARE SHOWING THEIR HANDS -
CLIMBING IN BED with their SAUDI PUPPET WHORES,
to EXTERMINATE YET ANOTHER  Muslim people