"HIVITES" - the JEWISH CONNECTION to the SATANIC DEGENERATION, Corruption, and MURDEROUS KIDNAPPING & ABUSE of AMERICAN CHILDREN is SPELLED OUT by RUTH SARAH ASHCRAFT... VICTIM of BEING PIMPED-OUT as a CHILD to CELEBRITIES & POWERFUL MEN & WOMEN.... INCLUDING SEX PARTIES Where TOM HANKS and HILLARY CLINTON Were 'allegedly' PRESENT?!!!

CHILD RAPE & "prostitution"  victim - PIMPED OUT BY HER FATHER  to BE RAPED by  CELEBRITIES & RICH & POWERFUL MEN (and women) - SARAH RUTH ASHCRAFT  NAMES NAMES; and not only SPECIFICALLY ACCUSES TOM HANKS of RAPING HER WHEN SHE WAS A CHILD... but  realizes & explains that it is "The  HIVITES"

who CONTROL 95% of America's horrific
Corporate whore Media - who are ALL, IN UNISON,


COVERING UP these MASSIVE, GROTESQUE CRIMES AGAINST CHILDREN

across the length & breadth of America...

serial CRIMES, HORRORS, & ATROCITIES
that are  **designed** from the TOP DOWN,
to CORRUPT, CORRODE, DEGENERATE...
and ultimately to DESTROY AMERICA!
Hold on to your seats, America... THIS RIDE is GOING TO GET BUMPY! 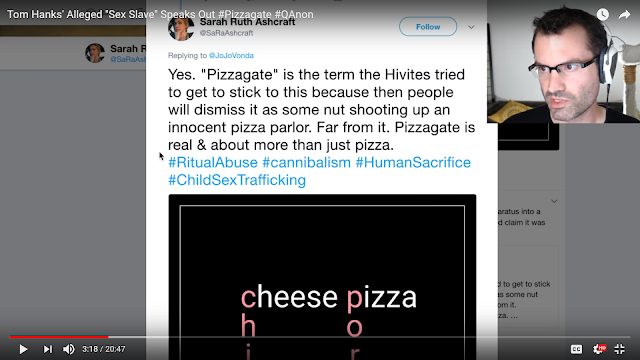 In the below Jimmy Kimmel show clip, Tom Hanks produces a video skit....
where he enters his daughter in a CHILD "beauty" Contest and continually
PIMPS & PRODS her to look & act as "the world's sexiest toddler"!


Ole Damgard has been doing HEROIC WORK,
EXPOSING the CHILD KIDNAPPING,
RAPE, MURDER &
CANNIBALISM RITUALS worldwide
which are - apparently -
"the GLUE" that HOLDS the CRIMINAL,
WORLD ECONOMIES SABOTAGING,
DICTATORSHIP COUPS fomenting,
mass-homicidal, treachery, treason,
& back-stabbing psychopath
would-be WORLD RULING "elites" together....
note: we believe that JASON GOODMAN is "CONTROLLED OPPOSITION" -
if he is not an actual MOSSAD, JEWISH INTEL OPERATIVE himself;  he has certainly, over the years, been funded, coached, briefed & directed  by THOSE WHO ARE...
but in the world of MILITARY INTEL,  in a properly functioning military intelligence agency
as much as one-half or more of your information probably comes directly from ENEMY SOURCES;  it is the Intel Officer's job to separate the wheat from the chaff, to discern the LIES & DECEPTIONS from the precious grains of truth....