TUCKER CARLSON Gets a Taste of HIS OWN COMMISSAR MEDIA PURGE medicine! MUZZLED... CENSORED... DELETED, "DISAPPEARED" by the JEW TRAITORS who OWN Fox "news" - and WHO CONTROL the LIES SPEWED OUT like DIARRHEA by those SATANIC JEW MEDIA MOGULS...


"A MUZZLED Tucker Carlson Returns to FOX
'news' after an UNANNOUNCED departure..."


ANYONE  WHO STANDS UP to THE SATANIC JEWS and their  COWARDLY, DEMONIC  LUST TO get Americans - the U.S. military -   to DESTROY SYRIA... *and* IRAN for them

This is NOT a "Satanic DEEP STATE" war that
threatens to ENGULF HUMANITY...  this is a
DEMONIC,  BACK-STABBING JEW TRAITORS' war...
without the SUPPORT of the TRAITOR JEWS AMONG us, the "deep state"
and ROTSCHILDS, Soros, GS, "Fed" SABOTAGE MACHINES would VANISH OVER NIGHT!

below video & screen-shots:
A much younger TUCKER CARLSON
disses, then brutally  CUTS OFF
the courageous & intrepid
Dr. STEVEN JONES

who was  TRYING TO EXPLAIN on Fox 'news'
how  MASSIVE amounts of  HIGH EXPLOSIVES
'nanothermite' were  USED TO EXPLODE,
pulverize, and demolish the World Trade Center
twin towers on 9-11 2001...


"the buildings 'COLLAPSED'  because
of airliner impact & burning jet fuel" 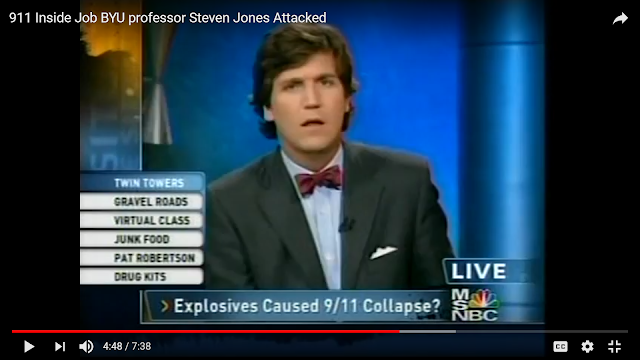 below image:
proof-positive that the GOVT.
& CORP. MEDIA stories about 9/11 ARE LIES!


WHERE DID THAT ENERGY COME FROM?!
from TONS of MOSSAD, JEWISH SPIES  placed HIGH EXPLOSIVES  pre-placed and electronically detonated in the LARRY SILVERSTEIN "jew landlord from hell" owned World Trade Center!

THERE WAS **not** ENOUGH ENERGY

to DEMOLISH the FLOORS IMPACTED
by  the speeding airliner &  jet-fuel fireball...


MUCH LESS DID those  floors
TURN TO  DUST!


yet - nearly an hour later, LONG AFTER
the JET-FUEL HAD BURNED OFF -
floors SEVENTY FLOORS BELOW
TURNED TO PULVERIZED DUST
in just SIX SECONDS -

the building "collapsed" at FREE FALL SPEED,
because the STRUCTURAL STEEL was BLASTED
and the CONCRETE WAS PULVERIZED
TO FINE DUST by TONS of ultra- high explosives!

- the government's story, and corp. media story,
that the MASSIVELY REINFORCED CONCRETE
& STEEL TOWERS  "collapsed"
because of "fires started by burning airliner jet-fuel"
IS A PREPOSTEROUS LIE!

by the corp. media moguls
for DARING TO TELL THE TRUTH!
in an OCEAN of  SATANIC JEW LIES... 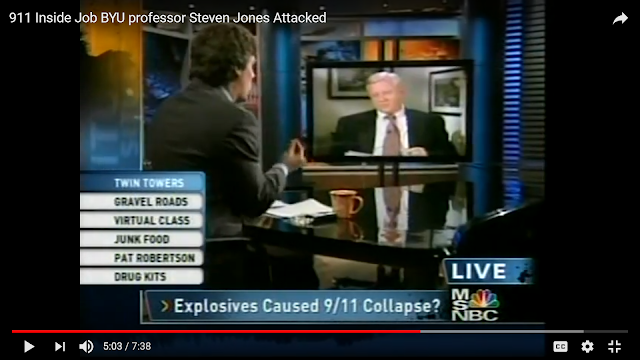 WE TOTALLY APPLAUD  Turker Carlson's  rebirth as a genuinely outspoken and informative NEWS caster these past few months...

...he even had the AUDACITY, the DETERMINATION,
the KAHONES!  to say what every SANE INDIVIDUAL
on planet earth KNOWS...

that  SYRIA's DULY ELECTED PRESIDENT ASSAD
DID NOT in any way, shape or form
USE POISON GAS to KILL CIVILIANS in Syria -

the EXCUSE TOUTED
by the SATANIC TRAITOR FIENDS
RUNNING the U.S. WAR MACHINE,
CON-GRESS, SENATE, WHITE HOUSE,
all other govt. agencies, and running
the RELENTLESSLY,  FIENDISHLY LYING
corporate whore media just over a week ago...


but WE KNEW that Mr. Carlson's OUTSPOKEN HONESTY WOULD NOT LAST -


the DEMONIC, TRAITOR JEWS
are in BLOOD-LUST MODE -

they KNOW SYRIA HAS BEEN WEAKENED
by    FIVE YEARS of  FIGHTING against their
(the evil Jews') **hired** SAUDI + TURKEY +
Indonessia, Malaysia,  Chechnya,
plus other Gulf Arab oil states'
HIRED MERCENARY  JIHADI FIGHTERS
-  TERRORISTS -
and the SICK, DEGENERATE, INSANE JEWS
will NOT  relent until they HAVE SICKED THE U.S.
(and puppet mass-murderous European) military

on not only SYRIA...
but an INVASION OF IRAN  as well.

IF YOU BELIEVE a WORD of
the GOD-DAMNED  JEWS owned CORP. WHORE MEDIA -


- then YOU are an IGNORAMUS MASS-MURDEROUS FIEND -

on EVERY LEVEL **WORSE** than the Germans who supported Hitler and the German army in World War II:

Germany had lost A MILLION MEN in WWI,
to be followed by the WARBURGS, SCHIFFS,
ROTSCHILDS  IMPOSED VERSAILLES TREATY,
then the WEIMAR HYPER-INFLATION
and  "great depression" - all of which LEFT GERMANY IN RUINS, devastation to the level of  FAMINE killing impoverished Germans

oh, and the German people had the  RED TERROR COMMISSAR HORDES under TROTSKY or STALIN  SUPPORTING TERRORIST SUBVERSIVES
IN GERMANY  with today's equivalent of billions of dollars
to SABOTAGE German society, law, order, and cultural institutions as well...

by contrast, AMERICANS today
CAN LOOK UP THE TRUTH
as easily as doing a google search for

that Syria President ASSAD
HAD ABSOLUTELY **NO REASON**
TO USE POISON GAS - he had NOTHING to benefit, 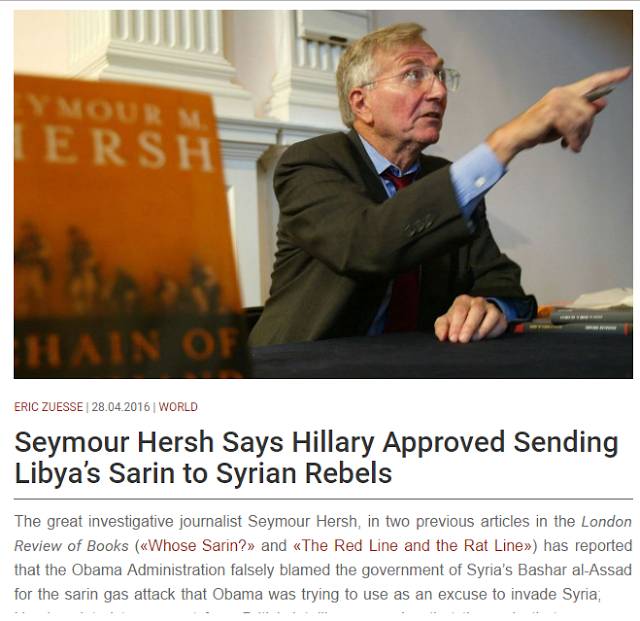 
The great investigative journalist Seymour Hersh, in two previous articles in the London Review of Books («Whose Sarin?» and «The Red Line and the Rat Line») has reported that the Obama Administration falsely blamed the government of Syria’s Bashar al-Assad for the sarin gas attack that Obama was trying to use as an excuse to invade Syria; and Hersh pointed to a report from British intelligence saying that the sarin that was used didn’t come from Assad’s stockpiles. Hersh also said that a secret agreement in 2012 was reached between the Obama Administration and the leaders of Turkey, Saudi Arabia, and Qatar, to set up a sarin gas attack and blame it on Assad so that the US could invade and overthrow Assad. «By the terms of the agreement, funding came from Turkey, as well as Saudi Arabia and Qatar; the CIA, with the support of MI6, was responsible for getting arms from Gaddafi’s arsenals into Syria». Hersh didn’t say whether these «arms» included the precursor chemicals for making sarin which were stockpiled in Libya, but there have been multiple independent reports that Libya’s Gaddafi possessed such stockpiles, and also that the US Consulate in Benghazi Libya was operating a «rat line» for Gaddafi’s captured weapons into Syria through Turkey. So, Hersh isn’t the only reporter who has been covering this. Indeed, the investigative journalist Christoph Lehmann headlined on 7 October 2013, «Top US and Saudi Officials responsible for Chemical Weapons in Syria» and reported, on the basis of very different sources than Hersh used, that «Evidence leads directly to the White House, the Chairman of the Joint Chiefs of Staff Martin Dempsey, CIA Director John Brennan, Saudi Intelligence Chief Prince Bandar, and Saudi Arabia´s Interior Ministry». And, as if that weren’t enough, even the definitive analysis of the evidence that was performed by two leading US analysts, the Lloyd-Postal report, concluded that, «The US Government’s Interpretation of the Technical Intelligence It Gathered Prior to and After the August 21 Attack CANNOT POSSIBLY BE CORRECT». Obama has clearly been lying... [cont'd]

"Anatomy of a Great Deception"
a SINGLE, OUTSTANDING video documentary
by film producer David Hopper recounts his own
"awakening" starting in 2011...
and PROVES beyond a shadow of a doubt that

"our" U.S. government HAS LIED TO us -
the American people - about EVERYTHING that happened during the mass-murder terror attacks of  9/11 2001... that the COVER-STORY of  "19 MUSLIM TERRORISTS"  was a LIE...
that ONLY  TONS OF  CAREFULLY PLACED HIGH-EXPLOSIVES,  PRE-PLANTED in the twin LARRY SILVERSTEIN OWNED  World Trade Center towers, could POSSIBLY have accounted for the buildings being DEMOLISHED in such spectacular & horrifying fashion.

below image: If the 9/11 New York World Trade Center towers

then WHERE ARE THE PANCAKED FLOOR SLABS
that we would expect to see, one piled atop another? 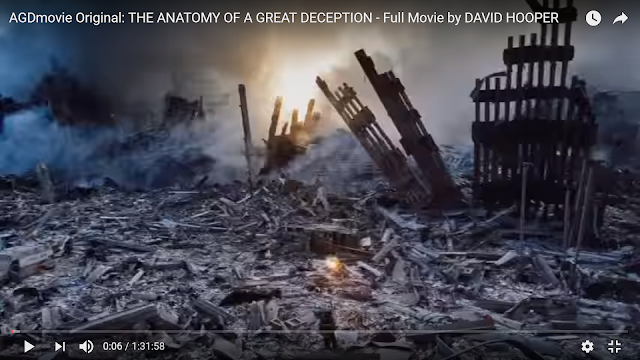 IF the government's story  of
"fire WEAKENED THE STEEL of columns and floor girders, leading to 'COLLAPSE'"
were TRUE -  we would expect to see a HUGE PILE OF  FLOOR-SLABS - 110 of them,  one atop the other.

Instead,  SO MANY HIGH EXPLOSIVES
WERE USED that THOUSANDS OF TONS
OF CONCRETE WERE TURNED TO DUST
in 6 seconds flat... and what was left of a huge building
fell into the hole where the basement levels had been.

ANATOMY of AN ACADEMIC PURGE!

yes, America... the Orwellian-named,
DHS, "department of homeland security"
is RUN BY, OWNED by
the PSYCHOPATH TRAITORS
who are ALIGNED WITH THOSE
[the MOSSAD diabolical, mass-murderous JEWS!]
who BLEW-UP the World Trade Centers
on 9/11 2001...