GOOD NEWS, BAD NEWS MONDAY: the BAD NEWS: the "deep state" TRAITORS Run GOVERNMENT WAR to EXTERMINATE YOU, YOUR FAMILY, your community, and your nation IS FAR MORE ADVANCED THAN YOU IMAGINE! FORMER CIA HIRED MERCENARY/terrorist CODY SNODGRASS Describes OPERATION INDIGO-SKYFALL - just ONE of the TRAITORS in GOVERNMENTS' THREE-PART PLANS to POISON the AMERICAN PEOPLE into STUPIFIED SUBMISSION & early graves...


**  huge  AIR FORCE jet TANKER  AIRCRAFT  SPRAYING the SKIES and the POPULATION (and food-growing land) below with HIGHLY LETHAL, TOXIC COMPOUNDS to debilitate and destroy our minds, bodies, and central nervous system

but  ALUMINUM, BARIUM, STRONTIUM, and other
"nano sized" chemical compounds sprayed from the sky
ACT IN CONCERT with FLUORIDE in our water supply,
along with "GLYPHOSATED"  pesticides &  GMOs in our food, to create a "synergy,"  or  a MULTIPLIER EFFECT
to make the toxins  more than ONE HUNDRED TIMES
as deadly as if they were dosed to us individually....
and this video doesn't cover HIGHLY CANCER-CAUSING 5G  wifi or  SILENT GOVERNMENT WEAPONIZED "emf" radiation guns,  i.e.  SILENT,  SOUNDLESS  DEATH-RAYS or nuclear radiation toxicity!!

RADIATION DAMAGE
that **ESPECIALLY** TARGETS
the developing egg-cells of
EVERY YOUNG GIRL going through the gestation phase of her mother's pregnancy,

if the mother is EXPOSED TO  such DNA,  GENES ALTERING RADIATION - even a home WiFi router - or laptop computer! - has the POWER to ALTER her future descendants' genes, most certainly for the worse!

and are highly susceptible to being "cooked," DAMAGED, IRREPARABLY ALTERED by  microwave,
i.e. by WiFi  RADIATION! 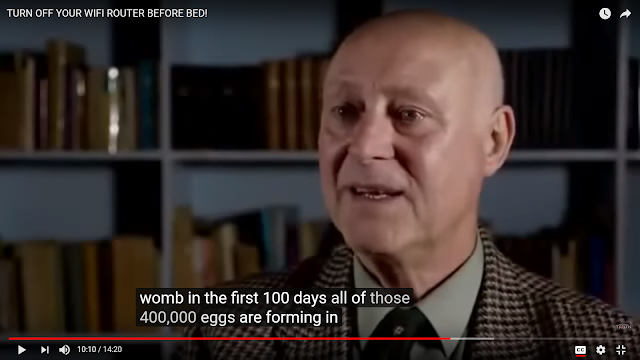 in our  CALLOUS, SELFISH STUPIDITY,


and in our "get along, go along" COLLABORATION,

WE ARE DOOMING
our  own children and
ESPECIALLY OUR GRANDCHILDREN
to LIVES of malformation & mental retardation stress & horrors!