JEW BILLIONAIRES are BEHIND the DEADLY "deep state" MASS-SHOOTING ATTACKS on AMERICANS1 The JEW BILLIONAIRES **ARE** the "deep state" - INCREASINGLY EXPOSED: SHELDON ADLESON, SOROS, & MGM **LINKED** to ALL the GOVT & WHORE MEDIA **LIES** about the Las VEGAS-MGM MASSACRE... and NOW IN FLORIDA, the TRAITOR DEEP STATE Satanists **REPEAT** their PROGRAMMED MK-Ultra "LONE NUT GUNMAN" MASS-SHOOTING MASSACRE in the SAME BROWARD COUNTY as the EARLIER Ft. LAUDERDALE AIRPORT SHOOTING MASSACRE!! AMERICANS SHOULD BE MARCHING on WASHINGTON BY THE MILLIONS !

"Israel and a handful of Jew billionaires HAVE MORE INFLUENCE on OUR ELECTIONS  than Russia OR ANY OTHER COUNTRY on the planet and everyone in Washington D.C. [and across the *entire* WHORE MEDIA]   knows it."

EVERY  TIME  the "DEEP STATE" FBI,
CIA, local "law enforcement," & corp. whore media along with local govt. collaborators
run "a SECURITY DRILL"  -
it is LICENSE for them
to  KILL AMERICANS -
below images:
EVEN DURING and seconds AFTER the  BOSTON MARATHON ***ALLEGED***  "BOMBS" WENT OFF..... the FLAGS flying MERE FEET AWAY were UNDAMAGED - NOT A HINT of SHRAPNEL, BLAST,  or FLAME DAMAGE!  Because they were FAKE,  Hollywood PYROTECHNIC  "FLASH BOMBS"  - they kind they ROUTINELY USE \
on Rock Concert stages..... ANOTHER  "FALSE FLAG' TERROR ATTACK PEREPTRATED by GANGS OF TRAITORS deeply embedded, INFESTED IN the "U.S." UNDER ZIO-NAZI JEWS govt... 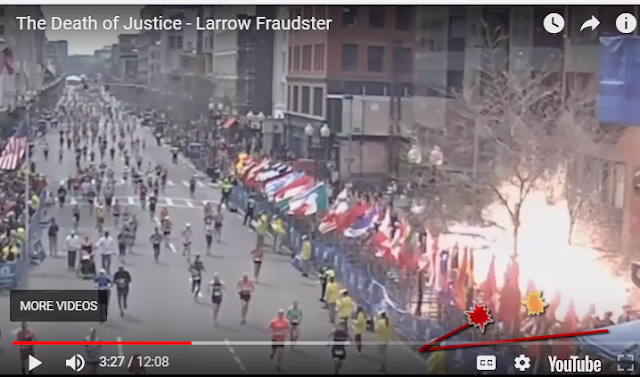 NO ONE WAS KILLED in the  BOSTON MARATHON  **FAKE**  "bombing"  - but they DID LOCK-DOWN  & TERRORIZE BOSTON with their  MILITARIZED POLICE "swat" TEAM INVASIONS,  and SHOT  TWO INNOCENT  CHECHEN "suspects" to FRAME PEOPLE for a   DEEP STATE PERPETRATED TERRORIST ATTACK - AMERICANS SHOULD BE OUTRAGED, and  HANGING the TRAITORS who KEEP RAMMING these GOVT. TRAITORS  perpetrated TERRORIST ATTACKS DOWN OUR THROATS !!!!

EVERY  TIME  the "DEEP STATE" FBI,
CIA, local "law enforcement," & corp. whore media along with local govt. collaborators
runs "a SECURITY DRILL"  - it is LICENSE for them to KILL AMERICANS -

IF YOU **SUPPORT**
the GENOCIDAL  JEWS' WARS
to EXTERMINATE PALESTINIANS, SYRIANS, IRAQIS,
and  ALL CHRISTIANS throughout
the entire Middle East.... then  YOU
are a MINDLESS, HATE-WHIPPED SAVAGE DUPE who  DESERVES to
SEE YOUR OWN CHILDREN
SHOT-UP WITH DEADLY VACCINES - or  SHOT & KILLED by the KILLER COPS & MERCENARY ASSASSINS in these SATANIC ZIO-NAZI "deep state" OPERATIONS....

“Many credible sources, including students, parents, and teachers have openly admitted on camera that they were told at one point or another prior to the Valentine Day shooting that a “Code Red” active shooter drill would be taking place”. — Shepard Ambellas, Intellihub.com