EVERY JEWISH TEMPLE in America is a CESSPIT of TREASON & SEDITION... INSIDIOUS SABOTAGE by SWARMS of ILLEGAL IMMIGRANTS, BRIBED, CORRUPTED, DEGENERATE, & BLACKMAILED officials... and TORRENTS of corp. MEDIA LIES to SABOTAGE America's Sovereignty... so JEWS can RULE through MANIPULATION & TREACHERY


While Alex Jones, as usual,  talks all over his co-host in this video, there is still a ton of valuable information Mr. Jones discerns and points out:  "RACE BASED POLITICS, the REPUBLICANS, the PARTY OF LINCOLN  ENDED IT."   Well... not exactly.  In the SEGREGATED, post-Civil War Deep South,  SEGREGATION was only one-half step from absolute slavery:  a "midnight visit" from the Sheriff's deputy was little different from a Vietnamese family getting a "midnight visit" from the Viet-Cong for collaborating with Americans during the Vietnam war... right up until the Vietnam War (1960s).  But Mr. Jones is otherwise correct:  REPUBLICANS were the party that ENDED SLAVERY,  while DEMOCRATS were the party of the SLAVE OWNERS before the Civil War... and  SEGREGATIONISTS after the Civil War, all the way up to SEGREGATIONIST Southern DEMOCRATS  SWITCHING to the REPUBLICAN PARTY when Presidents Kennedy & Johnson started DESEGREGATING the Deep South 1960-1965.
President-elect Donald Trump's 2016 election victory has the possibility of RESTORING the MODERATE wing of the Republican Party as the Party of the American WORKING CLASS _AGAINST_ SLAVERY and ABUSE of WORKERS:


Mr. Jones REFUSES to mention the... ELEPHANT  STOMPING America's living room to splinters - and KILLING anyone it runs in to:  the ZIO-NAZI JEW TRAITORS' elephant,


WE COMPLETELY AGREE with Mr. Jones:

"GLOBALISM is the RETURN of SLAVERY"
with "CORPORATE KINGS"
the new SLAVE OWNING monarchs of yesteryear....

- the JEWS in Europe, North America,  Latin America, in North Africa, in the Mideast, and throughout the world  had an UNBROKEN 25 century string of  FINANCING & PROFITEERING from the world's many forms of SLAVE TRADES - including not only the trans-Atlantic trade in AFRICAN slaves, but also including the SALE of MILLIONS of  CAPTURED EUROPEAN and SLAVIC CHRISTIANS as SLAVES to NORTH AFRICA & OTTOMAN EMPIRE MUSLIM  slave buyers as well...   JUST EXACTLY  as  the  JEWISH BIBLE, the "OLD TESTAMENT TELLS  THEM TO.

And, futrthermore, you would have to be naive in the extreme to believe that
JEW FINANCIERS WASHED THEIR HANDS of SLAVERY after the end of the Civil War:

KING LEOPOLD II ENSLAVED the ENTIRE  African Congo Basin,
the so-called "Belgian 'Free State' Congo" was actually LEOPOLD's WHOLLY OWNED PRIVATE   slave  PLANTATION:
and Leopold and his father were PUT ON THEIR THRONE with  ROTSCHILDS FINANCING...
and there can be no doubt  WHO MANAGED Leopold's "profits" and EXPORTS from the
TEN MILLION MURDERED AFRICAN SLAVE VICTIMS - up to the very eve of World War I


The so-called Good Book explicitly, repeatedly and unequivocally endorses and approves of slavery, presenting it as an institution directly sanctioned by God.
Consider the following passage from Leviticus, which is one of a long list of instructions spoken   by   God   to Moses:


“Thy bond-men SLAVE MEN and thy bond-maids SLAVE WOMEN which thou shalt have OWN, shall be of the heathen that are round about you:  of them shall ye BUY bond-men  SLAVES and bond-maids.Moreover, of the children of the strangers  [foreigners... aliens... non-jews!!!]  that do sojourn among you, of them shall ye buy, and of their families that are with you, which they begat in your land. And they shall be your possession. And ye shall take them as an inheritance for your childrenafter you, to inherit them for a possession, THEY shall be your bond-man [SLAVES!]  forever.”
—Leviticus 25:44-46

The idea that human beings can be bought and sold like possessions, and that this state should last in perpetuity, is a REPUGNANT one that lies at the root of all the cruelties and inhumanities associated with slavery.  (cont'd)

EVER WONDER WHY there are ARMIES of  TERRORISTS -  ATTACKING SYRIA, ATTACKING LIBYA
, perpetrating MASSACRES in IRAQ...
but NEVER A SHOT FIRED IN ANGER towards ISRAEL?! 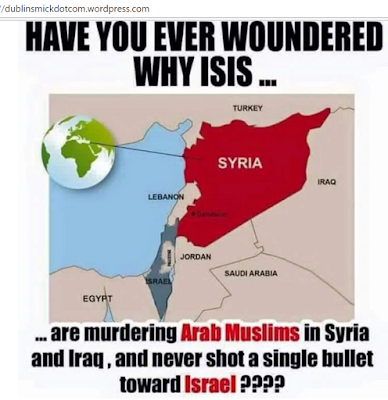 THEY THINK YOU ARE TOO STUPID to notice!
"isis" and "al Qaeda" and al Nusra are all MOSSAD,  ISRAEL JEWS
+  CIA  sown, recruited, trained, and nurtured "EXTREMISTS" -

of the exact same sort as the BRITISH ARMED the SAUDIS to WIPE OUT all other contestants for Arab rule of Arabia
(until the end of World War I, Arabia had been ruled by Turks of the Ottoman empire)
- because the billionaire Rotschilds,  Montefiori,  etc. JEWISH FINANCIERS ruling the British empire SELECTED the MOST GENOCIDAL ruffians they could find to rule Arabia as their proxies: the more MURDEROUS and LESS DEMOCRATIC a 'chosen' regime is...
the less loot you have to share with the commoners.
Mr. Bollyn's latest, greatest, courageous article:  anyone who hasn't got the intelligence to find and read, and understand
Mr. Bollyn's
"one man does the work of  FIFTY national security agencies and genuine 9-11 investigations... by himself"  research and easily read reports does NOT DESERVE the freedoms, liberties, rights, & privileges of AMERICAN CITIZENSHIP

or, as Benjamin Franklin said,
"Those who would give up essential Liberty, to purchase a little temporary security, deserve neither Liberty nor Security" -

this is especially true
when YOU HAND OVER your rational, logical, mental analytical skills to those you deem "YOUR PROTECTORS"

-  even though their "RECORD of PROTECTING YOU" includes:

The Computer Crimes of 9/11: How Critical U.S. Airport
Computers Were Compromised with Israeli Spyware