as ever... we apologize for not being able to do a "perfect", much less comprehensive & complete job of writing up this article/post...
We are not being "RACIST" here... we would vote for Veterans Today Senior Editor Gordon Duff for PRESIDENT of these (late) "United" States of America in a New York second... if we thought he would bring the Neo-Cons' WAR ON HUMANITY to a halt.... and  clean out & expose the RATS'NESTS of  Neo-Con,  Zio-Nazi traitors, war-pigs, perpetrators, financial rapists, and economic saboteurs behind all these horrors (and atrocities).
But in his latest, greatest article,  Mr. Duff  does exactly what we have come to expect from so many previously courageous, but ultimately cowed reporters commentators, writers, & journalists when it comes to CONFRONTING the pure evil, depth, breadth, and ferocity... and  TRUE SOURCE of all that hate - of the NEO-CON, "globalist",  GENOCIDAL ZIO-NAZI, judeo supremacist agenda:


"Seymour Hersh "SUCCUMBS to DISINFORMATION" by Paul Craig Roberts..
the same courageous, famed investigative journalist Seymour Hersh who uncovered, exposed, and through personal diligence against the ENTIRE U.S. army/usg propaganda machine  brought some degree of closure to America's MAI LAI MASSACRE atrocities... and shameful lies from the VIETNAM WAR era over 3 1/2 decades ago

Today,  Mr. Gordon Duff succumbs to the same temptation to soft-pedal... down-tone..
SOFT-SELL the TRUE source of all the HATE, MURDER, LIES, WARS, ATROCITIES, and premeditated "CREATIVE DESTRUCTION"  GENOCIDE, ETHNIC CLEANSING, mass-murder, complicity with TERRORISTS,  MASSACRES, rapes, slavery, TORTURE,  extortion, poison-gas attacks,  NUCLEAR WEAPONS ATTACKS, (etc.) of past TWO DECADES since the "Monica" impeachment farce (a media/usg govt. LYNCHING... of a SITTING PRESIDENT in full view of the whole world!), the STOLEN ELECTION, and the 9-11-2001 TERROR ATTACKS and subsequent "TAKE OUT 7 nations in FIVE years"  "plans" - which were only THWARTED when the AMERICAN PUBLIC  OVERWHELMINGLY TOOK TO THE ELECTIONS BOOTH in 2006 to toss the Republicans out...  DESPITE the 'Neo-Con'  'Democratic' 'leadership' trying to SABOTAGE the Democrats in that election.... so to ensure the Bush-Cheney-WOLFOWITZ-CHERTOFF-Mukasey-Libby-ZAKHEIM regime would STAY IN POWER.... and would have immediately (had the Republicans retained Con-gress in 2007)  ATTACKED IRAN.

NO, Mr. Duff... the PENTAGON, America's UNIFORMED military top generals and admirals..
are most certainly NOT the SOURCE of all the above referenced HATE, MURDERS, WARS, TERRORISM and TERRORIST  SUPPORTING ATROCITIES breaking out all over the globe...
...although we certainly agree that he higher in the U.S. military chain of command one goes, the more "COMPROMISED".. = blackmailed! extorted! compromised", and "conflicted" those senior ranks are.... 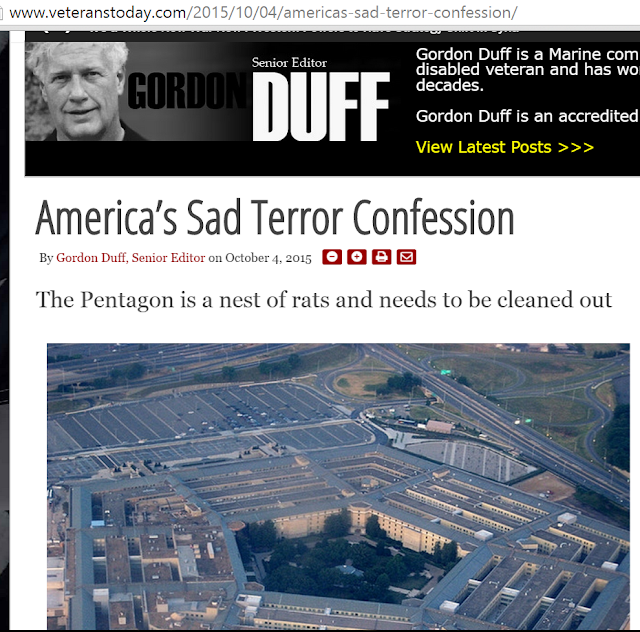 Ironically, just a week or so earlier, Mr. Duff did correctly identify the CORRECT CULPRITS of the ON-GOING WAR AGAINST AMERICA and ever  metastasizing "WAR ON TERROR" - which is a U.S. government, military, and secret, "Black Ops" agencies WAR to HIRE, INSTIGATE, DIRECT, and OVERSEE TERRORISTS as precisely the forces of  "CREATIVE DESTRUCTION" - the  "TAKING OUT OF NATIONS" that the TRAITOR  NEO-CONS  GLOAT ABOUT in their own PUBLIC WRITINGS!


But like ALEX JONES before him,  Mr. Duff has gone "SOFT"  on just  WHO it is who (are) behind ALL these atrocities... the volumes and terabytes of data  to the contrary!
In July of 2013, as the ISRAEL WAR LOBBY,  the JEWISH OWNED corporate press/media ("media whores"), and the REPUBLICAN and 'Democrat" Parties'  "senior leadership" (sic) under AIPAC's direction ALL SOUGHT to INVOLVE the United States and U.S. military in ANOTHER  WAR in the Mideast -  "AIPAC Lobbyists SEEK U.S. 'ACTION' or 'STRIKES'  in Syria" -
it was ALEX JONES leading the fight for truth, justice, and human rights.  Summoning up his years worth of "conspiracy theory" OUTRAGE,  Mr. Jones and his crew at InfoWars.com pointed out that the SYRIAN ARMY had  NO, NO, NO rational for gain or advantage by USING POISON GAS to attack their enemies in the suburbs of  Damascus (the capital of   terrorists and "rebel" besieged Syria):  the United States (in the person of the Obama administration) had clearly spelled out that "use of poison gas would be a RED LINE in the sand" the crossing of which, by the Assad regime & Syrian army, would TRIGGER a U.S. "INTERVENTION"  under the international principle of "R2P",   "RESPONSIBILITY to PROTECT" (innocent civilians caught up in a war zone).
As Mr. Jones and the Infowars crew pointed out, EVERYTHING that the United States and ISRAEL SAID about the Syria "SARIN" "POISON GAS" attacks WERE LIES!
The SYRIAN ARMY had NOTHING TO GAIN by using poison gas... and they already had the military force to OVERPOWER "rebels" and terrorists instead of using poison gas.
The "rebels" and TERRORISTS who had BEEN ATTACKING SYRIA since, essentially, the 2006 mid-term elections when the U.S. public REFUSED TO SUPPORT the Cheney-WOLFOWITZ-CHERTOFF-(bush) administration  plans to ATTACK & INVADE SYRIA & IRAN led to a DEMOCRATIC PARTY SWEEP of the Congressional elections that year
(DESPITE "Neo-Con" democrats SABOTAGE and OBSTRUCTION of their own party's message!)

THE REBELS, on the other hand, HAD EVERYTHING TO GAIN by using POISON GAS:
#1. they would continue to  MURDER and TERRORIZE their SYRIAN public victims;  the main strategy of the ISRAEL, U.S., SAUDI, & NATO directed  "ISIS" PROXY TERRORIST INVASION of Syria;
#2.   in the horrific corporate "MEDIA WHORES"  mish-mash of  facts and "news" (PROPAGANDA LIES!)  any blame for the SARIN GAS murder attacks would probably stick NOT TO THE PERPETRATORS, by to the embattled ASSAD regime...
#3.  if enough "sympathy" (CROCODILE TEARS!) for the victims, and OUTRAGE/HATRED was generated and directed at the Syrian army and Assad regime,  THEN THE JEWS would FINALLY GET the U.S. MILITARY to FINISH THE DIRTY-WORK their HIRED "ISIS" PROXY TERRORISTS HAD STARTED... U.S. military forces would bomb Syria's army to dust, the AL QAEDA/ISIS terrorists would swoop in, Syria's  civil government would collapse... and the jews would accomplish their  20+ century goal of REGAINING CONTROL  OVER SYRIA -  as their evil "holy"  bible alleged that their "g-o-d" Yahweh had "promised" them with his "covenant" with Abraham.
Although Mr. Jones' network was small (tiny?) compared to the CORPORATE MEDIA whores
(actually, Mr. Jones claims he reaches far more viewers than CNN or the other "dinosaur" corporate media)   the message that  THE JEWS (AIPAC, the ISRAEL LOBBY, and especially the JEWISH SENATORS & CON-GRESS CRITTERS)   were IN SUPPORT OF AL QAEDA, and  trying to make  the U.S. military in to "AL QAEDA's AIR FORCE"  resonated among enough Americans that the UNTHINKABLE HAPPENED:    AIPAC  got a BLOODY NOSE from the AMERICAN PEOPLE,  and no matter how well funded and how well connected AIPAC's ARMY of  undead, VAMPIRE extortionists "lobbyists"  became UNWELCOME in CONGRESSIONAL OFFICES !!

But the WARMONGERING JEWS are as PATIENT as they are INSATIABLE... and 2 years later, they have NOT GIVEN UP on GETTING AMERICA to BOMB SYRIA & IRAN for them.

MR. DUFF... WHO were the more likely PERPETRATORS of  9-11 ??
THIS gang with the "SECURITY," government ("Justice" department, "DEFENSE" department, WHITE HOUSE, TREASURY),  DEMOLITIONS, BUILDING OWNERS, FINANCIERS, and MEDIA OWNERS gang.... (heck... their 'PNAC' military/strategic/CFR  apparatchiks  SPELLED OUT their requirement for a "NEW PEARL HARBOR" in public, on paper, in advance of their "fortuitous" plans coming to fruition!)  with the MEANS, OPPORTUNITY, MOTIVE and CAPABILITY to pull off their (mass-murderous) little stunt... 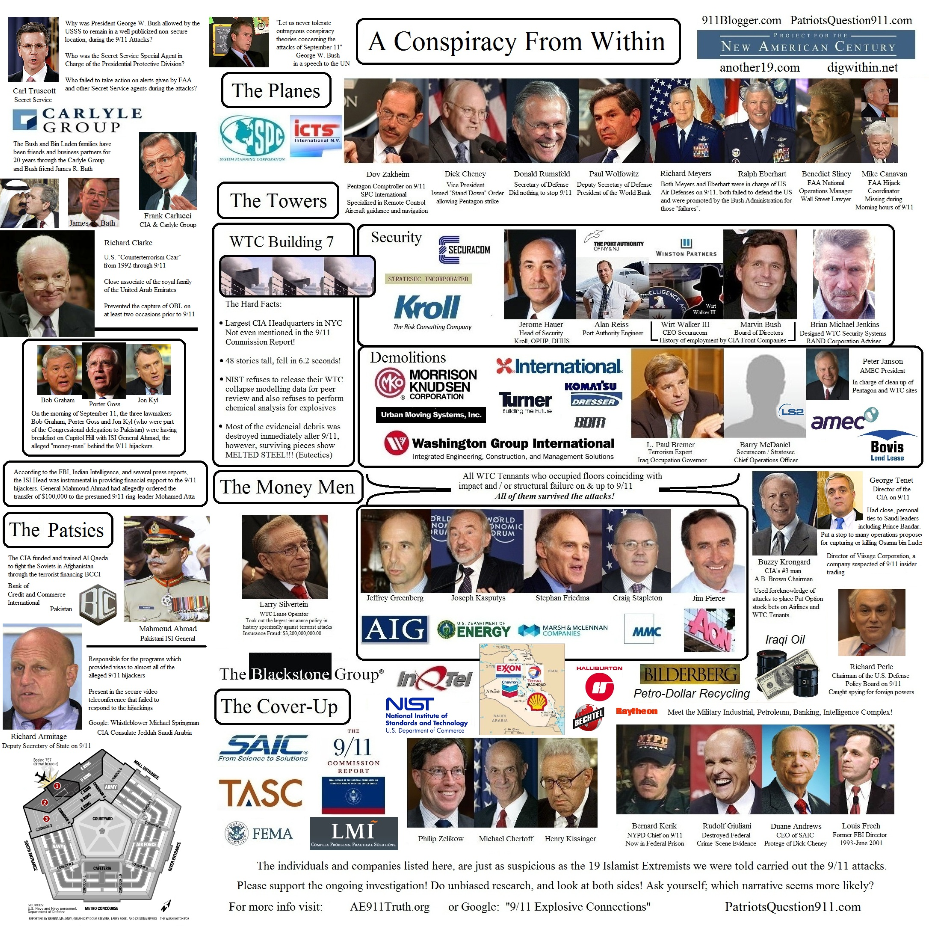 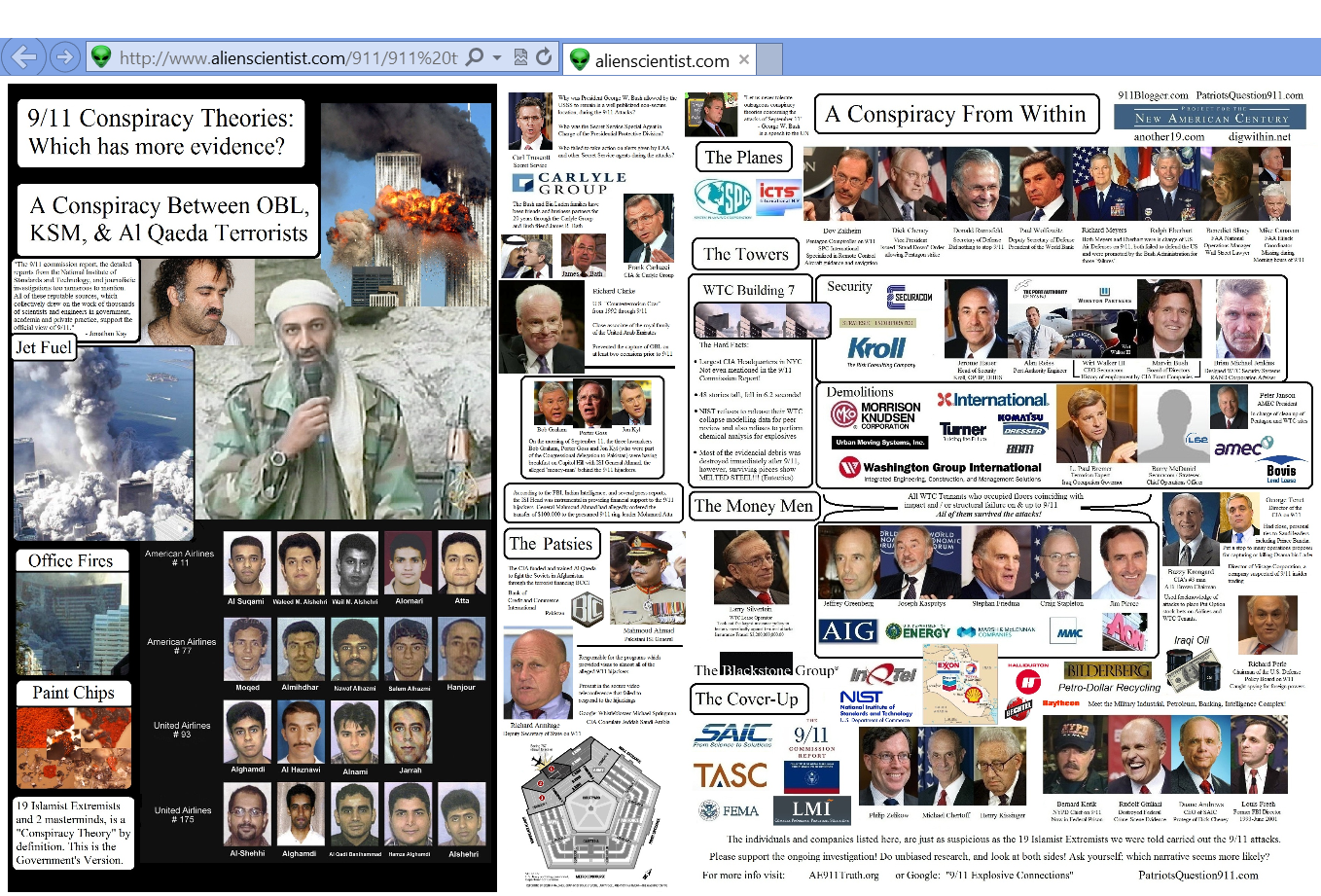 9-11 CHART: the PLAYERS and their CONNECTIONS:
"PNAC' PERPS (right) and obl /aQ PATSIES (left)
(note: we believe that DON RUMSFELD and RICHARD CLARKE were "OUT OF THE LOOP" of the 9-11 attacks..
though, beyond a shadow of a doubt, the only reason they held their jobs waay-up high in the usg ("U.S." government)
were because they were "TEAM PLAYERS" with the NEO-CON,  PNAC, ZIO-NAZIS wrecking crew...﻿﻿