But no....  the INSANE genocidal Jew psychopaths,
seeing their demonic fantasy of

"GREATER ISRAEL"...
(to include _ALL_ of  EUROPE, AFRICA,  RUSSIA (the Ukraine)
_and_ CENTRAL ASIA  (in addition to Amerika, Canada, Australia, NZ, etc. etc. etc.))
...the insane, demonic Jew psychopaths,
seeing their demonic fantasies of

bleeding away,  slipping away...


...as a hated and despised nation of SLAVS
(from whence the word "SLAVES"!!)
is actually BOMBING  _their_  (Genocidal JEW PSYCHOPATHS')

Wasn't RUSSIA SUPPOSED TO BE DESTROYED, DISMEMBERED BY NOW?  Putin  shot-down, killed, in that IDF, israel Air-Force ASSASSINATION attempt (jet-fighter launched missile attack) that "accidentally" shot down an innocent MALAYSIAN AIRLINER instead of  Putin's Russian state aircraft... as a PRELUDE to the BRIBERY and/or "DECAPITATION"  -    assassinations   if not overt NATO WAR against Russia's remaining leaders by now?

Well,  or course Putin has miraculously survived all the Zio-Nazi assassination attempts thus far
(like snakes or rabbits in a meadow... for every one you see, there are 10 or more you don't see)

and ultimately  saner heads (than the Zio-Nazi genocidal jews, Neo-Cons,  Likudniks, and their serially treasonous collaborators)  had to prevail if the US, NATO, and Israel weren't going to start trying to NUKE RUSSIA OFF THE MAP
(which they, the insane Neo-Con war-pigs certainly wanted to do).

And,  of course,  the prospect that the JEW STATE (israel) itself would skate
through  a RUSSIA DESTROYING  NUCLEAR WAR without getting at least
a taste of their own  (nuclear aggression and destruction) medicine being improbable
(and just imagine what a war vs Russia - and Iran! - would have done to the AMERICAN ECONOMY!  BYE-BYE CHEAP OIL, and almost free gizmos from China!)

WHICH IS EXACTLY WHY
the  demon jews have wheeled out one of  their big guns, their biggest cannons:

ZBIGNIEW BRZEZINSKI:
the Polish-Amerikan 'Neo-Con'   who would gladly watch his Polish ethnic co-nationals DISAPPEAR, VAPORIZED in a cloud of  NUCLEAR DUST,
if it would just win him some more brownie points from his Zio-Nazi jew billionaire paymasters!


Brzezinski to Putin: "Stop Bombing _OUR_ 'ISIS' /
al-Qaeda  HIRED TERRORISTS in Syria"...
or  'we' WILL NUKE YOU off the planet  ALL OVER AGAIN! 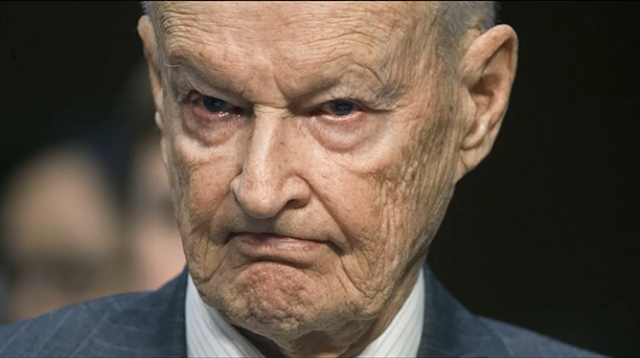 A reminder to Mr. Zbig:

those who FUND, SUPPORT, DIRECT, & INSTIGATE  TERRORISTS _known_ to have fired on and
killed AMERICAN  SOLDIERS & servicemen

KNOWN to have used POISON GAS on Civilians...
SHOULD BE REGARDED AS TRAITORS...
and dealt with as such !


And as one of the many, many "national security experts" IN WASHINGTION in the weeks and  months after the USS Cole was BOMBED by AL QAEDA TERRORISTS in a Yemen harbor in October of 2000...

WHAT DID YOU DO, Mr. Brzezinski,
TO BRING JUSTICE to the AL QAEDA FINANCIERS and PLANNERS _behind_ the USS Cole attack...

WHAT DID _YOU_ DO, Mr. Brzezinski,

to WARN Americans and especially the American flying public of a LOOMING AL QAEDA  TERRORIST THREAT...

-  even though the ITALIAN POLICE stationed SURFACE TO AIR MISSILES around the GENOA G8  Economic Summit in Genoa, Italy in JULY of 2001...

SPECIFICALLY to DETER THE THREAT of  HIJACKERS HIJACKING AN AIRLINER and using it as a flying bomb to attack the presidents & prime ministers attending the conference?

OR WERE YOU "in the know" - a COLLABORATOR with TREASON
regarding the 9-11 "FALSE FLAG"  MOSSAD & usg TRAITORS attacks that killed thousands of Americans on September 11th, 2001?!

SUPPLYING and SUPPORTING  TERRORISTS  is TREASON -
YOU NATO  PIG TRAITORS!


LOOK HOW MIGHTY, MIGHTY  NATO is!
All those  high-tech, billions of taxpayer-dollars funded mighty, mighty military bases and high-tech weapons systems  all over Europe, the Mideast, and in to Central Asia!
﻿
well... NOT SO MUCH!
"MIGHTY, MIGHTY" NATO  could NOT STOP

the ISIS TERRORIST DESTRUCTION of SYRIA...

because  NATO is nothing but a murderous PUPPET, a "GOLUM" created animated  killer
(better known as a "Frankenstein" artificially created & brought-to-life monster")

funded, directed, and instructed to assist
in the DESTRUCTION of NATIONS

post-script: earlier (farther up) in this post, we asked

"is it just us... or does Zbig look just like one of those evil reptilian aliens??!"

Well,  lo and behold!  Not only does the internet have the power to gather people's opinions from all over the world to where you can see, read, hear, and analyze them...  but it also provides a forum where you  can amazingly find that your "new" idea was  held by someone else years ago!


DID GEORGE SOROS  _really_  say
"DESTROYING AMERICA will be the
culmination of my life's work" ??!!

Well... we can't be certain.  But BeforeItsNews.com put up a story with exactly that headline...
and they've been accurate, timely, and verifiable in their reporting before... and it SOUNDS like something Soros would say,  the PATHOCRATIC JEW BILLIONAIRE who makes his home in London has financially and economically  RAPED the ENGLISH people - and all the residents of the "British Commonwealth" who had invested some portion of their savings in British pounds sterling -    AT LEAST THREE TIMES of a good portion of their life's savings...
So....  so, what?  So he can add a few more millions to his expense accounts?

This is a REPTILLIAN CANNIBALISTIC  jew-nazi DEMON,
a FINANCIAL "golem" brought to wicked fruition  ("brought to life"  hardly works),
a SERIAL ECONOMIC TERRORIST &  GENOCIDAL EXTORTIONIST
_posing_  as the public face, the  public front-man, and doing the dirty work
for his fellow demonic jew multi-billionaires, the Rotschilds, Lazards, Warburgs,  and other pathocratic, reptilian, Zio-Nazi cannibal Judeo 'elites'... 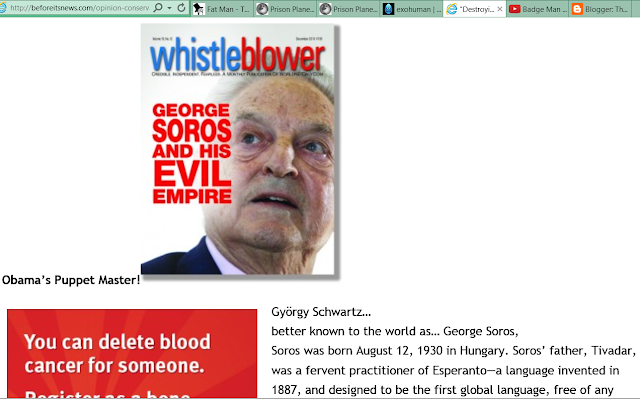 A happy little image to accompany the quote from our previous post,

"WE JEWS, we ARE THE DESTROYERS!"


“WE JEWS, we the destroyers, will remain the destroyers forever. Nothing that you do will meet our needs and demands. We will forever destroy, because we need a world of our own, a God-World, which it is not in your nature to build.”
—Maurice Samuel, You Gentiles

A REAL-LIFE GOLEM - animated, but not truly human,

As with all MOB EXTORTION RACKETS,

it is very, very difficult to say "NO" -

IF the Sweden Foreign Minister (or FINANCE minister, or DEFENSE minister, or HEALTH minister, etc. etc. etc.)  PLAYS ALONG... he will get a nice, fat,  200,000 euro  "expense account" and positive, "popular guy" press & TV media   coverage....

...the cartel will CANCEL  major military, exports (imports), and financing contracts with that nation...
the cartel will have OTHER PUPPET GOVERNMENTS  _TARGET_ that nation's export products for onerous IMPORT TAXES,
or other means of  DISSUADING other nations & clients from purchasing that nation's products...

...making the finance or foreign minister look like the goat**;  he (or she) will be driven from office penniless & HATED... with NO ONE in the finance industry or European trade offering him a job for years to come
(and quite possibly further _ruined_ by a  LEWINSKY-TRIPP  ("Monica") style "ROTSCHILDS HONEY-TRAP"  sex-trap or criminal [blackmail/ENTRAPMENT!] scandal
plastered all over the 'news'  Zio-Nazi hate propaganda system for years to come..

**btw,   the London & Paris  Rotschilds are alleged to have used this exact same vendetta/revenge process... against AMERICA back in the 1830s!

When President ANDREW JACKSON vowed to kill the 2nd Bank of the 'United States' - a bank alleged to have been CONTROLLED by the Rotschilds as a de facto subsidiary of (their wholly controlled) Bank of England  -   Nathan Rotschild  is alleged to have RETALIATED by instructing all European ports
(under Britain's control - which, in the post- Napoleonic era, was all of them!)
to  BOYCOTT, REFUSE to purchase, and deny American products.

This de facto TRADE EMBARGO not only DEVASTATED American shipping companies & producers (the entire U.S. East Coast economy, from Maine to Georgia!)
but in concert with the usual, standard radical EXPANSION > CONTRACTION
of  "credit" (= loans = "money"!) led to the U.S. "financial panic" of 1837....

i.e. a massive, heart-rending  economic contraction 'DEPRESSION' that actually saw families STARVE on the rural frontier.
(Frontier farm families had to pay their land purchase *loans* -  debts -  with the produce of their farms.  With little margin for safety and no "social security" net, it was easy for remote farmstead families who had plunked down every cent they owned as a down-payment on loans (much less on OVER-INFLATED, over-priced loans at the peak of a land-boom) to run out of  food during a harsh winter or late spring, or because of a bad harvest.)

Once you understand the means by which the Rotschilds judeo/euro financiers exacted retribution and retaliation from _anyone_ who opposed their interests back in the early 1800s
-  even emperors & crowned heads of Europe,  much less back-woods American presidents dependent on trade with Europe! -
then the "modern" means of   financial repression,  "ECONOMIC HIT MAN" EXTORTION, and global economic  _sabotage_  of  TODAY's  GoddamnSachs/Rotschilds/soros   financial terrorists and global extortionists  pop in to focus...

Not only does this text clip  highlight how Nathan Rothschild may have INTENTIONALLY ENGINEERED  the  United States  "ECONOMIC PANIC!" of 1837
(= STARVATION causing depression) .... but it introduces the name of J.P. Morgan....

...son of Junius Spencer Morgan,  who in turn was a partner in banking in Baltimore and London with GEORGE PEABODY...  who was reputed to be Nathan Rothschild's personal selection for an AMERICAN financial representative.... or banking front-man.
The legend is that Nathan underwrote (financed, paid for) Peabody's lavish London parties, including especially his 4th of July parties where the cream of British aristocracy attended... and Nathan is reputed to have delighted in Peabody telling him, later in private, of all the British "elites" who talked about Nathan being a boor,  a gutteral-German speaking  (Jewish) social climber while attending those parties (that Nathan paid for)...


http://www.bibliotecapleyades.net/sociopolitica/esp_sociopol_fed06c.htm
Henry Clews, the famous banker, in his book, Twenty-eight Years in Wall Street 33, states that the Panic of 1837 was engineered because the charter of the Second Bank of the United States had run out in 1836. Not only did President Jackson promptly withdraw government funds from the Second Bank of the United States, but he deposited these funds, $10 million, in state banks. The immediate result, Clews tells us, is that the country began to enjoy great prosperity.

This sudden flow of cash caused an immediate expansion of the national economy, and the government paid off the entire national debt, leaving a surplus of $50 million in the Treasury.

The European financiers had the answer to this situation. Clews further states,

"The Panic of 1837 was aggravated by the Bank of England when it in one day threw out all the paper connected with the United States."

The Bank of England, of course, was synonymous with the name of Baron Nathan Mayer Rothschild. Why did the Bank of England in one day "throw out" all paper connected with the United States, that is, refuse to accept or discount any securities, bonds or other financial paper based in the United States?
The purpose of this action was to create an immediate financial panic in the United States, cause a complete contraction of credit, halt further issues of stocks and bonds, and ruin those seeking to turn United States securities into cash. In this atmosphere of financial panic, John Pierpont Morgan came into the world. His grandfather, Joseph Morgan, was a well to do farmer who owned 106 acres in Hartford, Connecticut. He later opened the City Hotel, and the Exchange Coffee Shop, and in 1819, was one of the founders of the Aetna Insurance Company.....

And here's how the GLOBAL EXTORTION and CRIME CARTEL financiers ENACT their "PANIC of 1837" style "ECONOMIC HIT MAN"  VENGEANCE, RETRIBUTION, and RETALIATION.... TODAY, in "modern" times:


http://www.bibliotecapleyades.net/sociopolitica/esp_sociopol_fed06c.htm
The president of a small bank in St. Louis or Cincinnati, sitting in conference with Paul Warburg and J.P. Morgan to "advise" them on monetary policy, would be unlikely to contradict two of the most powerful international financiers in the world, as a scribbled note from either one of them would be sufficient to plunge his little bank into bankruptcy. In fact, the small banks of the twelve Federal Reserve districts existed only as satellites of the big New York financial interests, and were completely at their mercy.