Is it "FAIR" to   blame all the major problems facing Americans (and the entire human race) today on Judaism... on the Jews who hold high positions in our society & government, and the less powerful Jewish citizens who support their "chosen" 'leaders' in high places reflexively, with no real insight or investigation into the awful consequences of policies pushed by those powerful and influential "leaders"?


below video:   A year before he was assassinated,  in a speech  in New York to press moguls and media VIPS, President John F. Kennedy courageously confronted the ability of  "the money power" and their bought & owned media moguls to make SECRECY a centerpiece of  American governance and  "the national security state."    This excellent short video deconstructs the TREASON of today's politicians - for example, JOHN KERRY and George W. BUSH - who snidely believe that their oaths of secrecy to cult secret societies... [or their ability to profit from the INSIDER TRADING serial RAPES of the American economy] are more important than the  right of American citizens to know & understand the true motivations and goals of  their selected, designated (& "chosen") leaders...
making American democracy a farce of  corporate mass-media propaganda mind control....


Jewish supremacist judeo-nazi politician Benjamin Netanyahu whipped up a CLIMATE OF HATE, and ran a  Nazi-esque demagogue campaign of HATE and vilification against his 1995 Israel sitting Prime Minister opponent YITZHAK RABIN,
that political campaign of hate, scorn, derision, &  intensely focused contempt that led one of Netanyahu's hate-whipped supporters to murder.... shoot... assassinate  Prime Minister Rabin just before he was about  to be resoundingly reelected in that crucial election... putting Netanyahu in the PM's office,  and forever changing the course of  Israel's diplomatic peace initiatives....
But  MILLIONS of jews - in America, in israel, and throughout the world  today - continue to assert that "Israel is a democracy."
WHEN MURDER  ELIMINATES the right of the people to vote for an ALTERNATIVE to one party's policies... then that nation DOES NOT have a democracy (much less a functioning democracy)!!!
So while millions of  jews regard themselves as the crown of creation, as the holders & bearers of the highest levels of goals & ideals for  all of humanity,  on the single critical issue of  DEMOCRACY, alone  - the right of people to vote for a government that serves their interests -  JEWS ARE just INSANELY DELUSIONAL!
Israel is NOT a democracy, but a rogue, DEMAGOGUE, ethnic/nationalist judeo supremacist TERRORIST STATE whose policies for the past two dozen years have been determined by TERROR and MURDER.

above screen-shot:   NOT ONLY is the ENTIRE  FIELD of  ECONOMICS  based on DECEIT and the EVASION of TRUTH
(for they study of "money" -  the study of THE MONEY SUPPLY is as fundamental to economics, as the supply of blood is to the study of the heart in a human body, without blood the heart is useless!)
but SO TO ARE ALMOST ALL  fields related to economics:   finance, politics, law, law enforcement, social welfare,  foreign relations, international affairs, and government affairs...

for the simple reason that  "MONEY" is a proxy, a substitute, a temporary stand-in,  or an attempt to measure _REAL WEALTH_
(assets, whether tangible like a shipload of grains or  mass-produced computers; or intangible, like patents and copyrights)
and all the above mentioned fields are based on the correct, fair, and just allocation of finite resources in a fair, just, and democratic society.
If "the powers that be" can LIE... can deceive, can mislead, can distort, can disguise the true nature of the money supply,  then so too can they LIE, DECEIVE, DISTORT, DISGUISE, and evade the truth about the TRUE VALUE of EVERTHING that is assigned a "monetary value"!!

That is, the "Money Power" attempts to divert all the world's real wealth in to their own insatiably greedy pockets, using DECEIT and MANIPULATION of the money supply
This maniac single minded determination DISTORTS EVERYTHING.. for example, especially the quality of life in a biological world threatened by man-made chemical and radioactive pollutants.

DECEIT & DECEPTION are integral parts of  the "study" of economics...
we would argue that, for at least the past 100 years since the so-called "Federal Reserve" privately owned banking cartel was handed the government's own money-creation powers in 1913
DECEIT is  THE FUNDAMENTAL and single MOST POWERFUL factor is the American and western 'study' of economics....
relentless, serial, never-ending DECEIT and DECEPTION UPHELD by the CORPORATE MEDIA,
and  jewish "American"  blogger  Philip Weiss is "OK" with that! 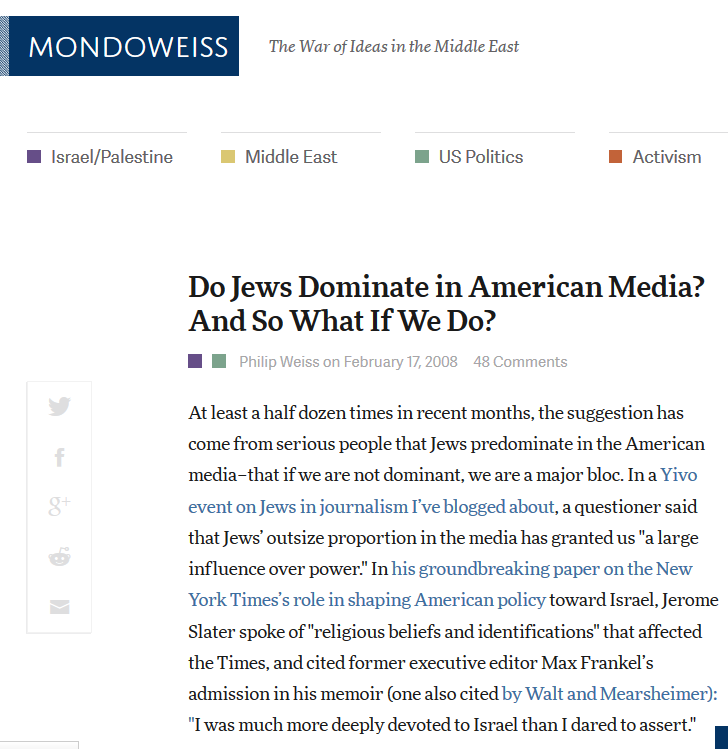 A LITTLE TOO SMART for his britches?     Anyone sane, and with more than 2 operating brain neurons, would acknowledge that there are SOME TERRIBLE PROBLEMS afflicting America (and the entire human race) this past decade... but the corporate media has MASTERED the art of  simultaneously conveying dual and conflicting messages; namely

#1.  "ALL IS WELL IN AMERICA - JUST GET A GOOD JOB, and YOU, TOO, can lead a life of LUXURY, LEISURE, and total dedication to the pursuit of ENTERTAINMENT!  (just ignore those who can't quite get on the luxury cruise)

while simultaneously telling us

but DON'T QUESTION the "GOVERNMENT EXPERTS"!  THEY ARE "EXPERT!" in "FIGHTING TERRORISM!" and ANY INTERFERENCE by YOU will be regarded as "SUPPORT FOR THE TERRORISTS!" - - but the battle next year will be BIGGER, more intrusive, and more costly  than it was last year....

(not to mention the even nastier little problem... that ISRAEL, the infernal jew state,  and their "money power" puppet states of NATO & the USA,  are ALL IN BED with the SAUDI, KUWAITI, QATARI,  & etc. SPONSORS OF ISIS TERRORISM is SYRIA, LIBYA, EGYPT, and all across the Mideast, Africa, South Asia... and world!!)

In a word,    IF    jews DOMINATE America's corporate press-media, IT IS IMPORTANT!

because AMERICA's corporate press-media are LIARS about EVERY SINGLE IMPORTANT ISSUE TO FACE the AMERICAN PEOPLE...
and the  agenda of  "the globalists" and  corporate facists and the WAR LOBBY... just so happen to  COINCIDE with the agenda espoused by such insane judeo supremacists as  BIBI NETANHAYU,  PAUL WOLFOWITZ,  JOE LIE-BERTHUG,  DIANNE FEINSTEIN,  SHELDON ADELSON, the KOCH BROTHERS,  RAHM EMANUEL, CASS SUNSTEIN,  etc. etc. etc. etc. etc. etc. etc etc. !!!


    
At least a half dozen times in recent months, the suggestion has come from serious people that Jews predominate in the American media–that if we are not dominant, we are a major bloc. In a Yivo event on Jews in journalism I’ve blogged about, a questioner said that Jews’ outsize proportion in the media has granted us "a large influence over power." In his groundbreaking paper on the New York Times’s role in shaping American policy toward Israel, Jerome Slater spoke of "religious beliefs and identifications" that affected the Times, and cited former executive editor Max Frankel’s admission in his memoir (one also cited by Walt and Mearsheimer): "I was much more deeply devoted to Israel than I dared to assert."
Lately broadcast reporter John Hockenberry related that he wanted to do a piece on the hijackers’ motivation after 9/11 but that NBC executive Jeff Zucker scotched the notion:


"Maybe," Zucker said, "we ought to do a series of specials on
firehouses where we just ride along with our cameras. Like the show Cops,