Senator Rand Paul CONFRONTS the Naziesque 'Neo-Con' High Command _behind_ the PUPPET president - "Obama is NOT A KING" - and Courageously mentions the CATASTROPHIC TERRORIST HELL-HOLE that Obama, Hillary, Kerry, Biden, Pelosi, Reid, Feinstein, Brennan, Panetta, Republicans in Congress & Senate, and the Mass-Murderous Neo-Cons have made of Libya, after their NATO bombs ASSISTED the AL QAEDA/ISIS TERRORIST INVASION there...


"OBAMA is NOT A KING" Senator Paul explains.

Not only does Senator Paul confront the  NEW ECONOMIC EXTORTION PLOT that is the Neo-Cons'  faux "environmental"  effort to IMPOSE CARBON TAXES on Americans...
(in addition to IMPOSING the 'Federal Reserve', the IRS, and the  domestic/global  terror/extortion agency  the DHS on  America's beleaguered taxpayers, families, and businesses)

...as a FINANCIER CONTROLLED EXTORTION and WEALTH EXTRACTION racket
(American businesses would be REQUIRED to PAY NEW, EXTORTIONATE TAXES & fees just to use energy,
in "CARBON CREDIT"  markets  THAT WILL BE RIGGED  by the treasonous, insanely greedy financiers.
The government can already tax energy consumption, without creating this monster new agency,
and financiers rigged, carbon-credits INSIDER TRADING &  financial EXTORTION markets)

but Senator Paul goes where NO ONE visible in the U.S. public or media has had the courage to go thus far:  pointing out  that
the OBAMA-HILLARY-BIDEN-KERRY-REID-PELOSI-FEINSTEIN-SCHUMER-LEVIN-Panetta-BRENNAN-JanetNapolitano-JehJohnson engineered  NATO  "LIBERATION of LIBYA"

HAS TURNED  Libya in to a TERRORIST HELL HOLE,

WAKE UP, AMERICA!
The fact that LIBYA and SYRIA are now TERRORIST RUN HELL HOLES,   is and was   the INTENT of the   HILLARY-PELOSI-panetta-Kerry-Obama-FEINSTEIN-Levin-Schumer-Boxer-Emanuel-Lew "Democrats" and their Rethuglican GENOCIDE & WARS PIMPING colleagues across the aisles  who funded "REBELS" in those PROXY WARS  of genocide & mass-murder   for the DEMONIC JEW WAR STATE (israel) !!
"REBELS"  then and now = ISIS,  rebranded AL QAEDA  JIHADI, MASS-MURDEROUS TERRORISTS,   funded by Israel, Saudi, Kuwaiti, Qatari, the CIA, U.S. State Department, U.S. military, and other  & U.S. government agencies   !!! 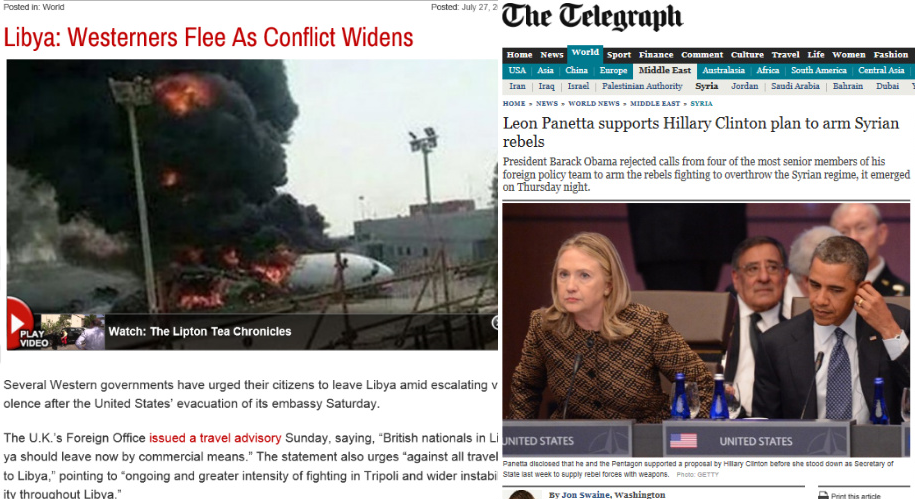 The ruthless "divide, extort, and conquer" tactics the insane Neo-Cons behind the Obama White House use to pound their blatantly treasonous,  anti-American agenda down America's throats are wearing thin...


(Remember, America?  how  both Bush and Obama ran as "middle of road" moderates and restraint-of-power nice guys  who pledged that they would not be swayed by the extremes of their respective "political base" constituencies?   Bush ran as  "a UNITER, NOT Divider" in his 2000 campaign, and pledged "NO NATION BUILDING" - a snide smear on the Clinton administration's allegedly out-of-control foreign policy  - but we now know that he and his warmongering 'PNAC' crew were planning to RAM "REGIME CHANGE" in Iraq down our throats the whole time!

Obama ran as someone who would REVERSE the DESPISED expanding wars, police state surveillance,  tax-cuts for rich in-time-of-war, Guantanamo, TORTURE,  and other "DOWN YOUR THROATS"   policies of  Bush-Cheney-Wolfowitz-Chertoff-Bernanke-Paulson gang  in 2008;

Obama promised us that he was someone who would bring us "CHANGE!" from those despised,  detested,  dictatorial, abuse-of-powers Neo-Con policies  and GoddamnSachs/Fed  financial rape & economic sabotage policies of the Bush-Cheney regime. But  once they were in office, and once their Neo-Con WAR LOBBY & FINANICAL RAPISTS APPARTCHIKS were infested all throughout the highest levels of the U.S. government and  in their respective presidencies - both Bush  and Obama then proceeded to ram  highly contentious and unpopular programs down millions of Americans' throats!)


Senator Paul is correct to note that CARBON TAXES are merely another attempt by the TREASONOUS  GoddamnSachs, JP Morgan, and other privately owned  'Fed' banking cartel bankers &  "financial elites"

to TURN AMERICAN SOCIETY and our productive industries into a CASINO  STOCK MARKET
that can be MANIPULATED by the "markets shorting,"  insider-trading,  SABOTAGE, EXTORTION, &  wealth extracting FINANCIERS** -

-  backed with the full  despotic authority,  not only of the IRS and Neo-Con global terror extortion agency the DHS;  but now (soon)  with a whole  NEW, DICTATORIAL  CARBON TAX extortion & property  seizure agency,

**(exactly as George Soros was the public face of the CRIMINAL Financial CRIME SYNDICATE, the insider trading cartel based in the City of London and around the Bank of England,  that intentionally robbed millions of British and worldwide savers of their life's savings, by temporarily SABOTAGING the value of the British currency, the pound sterling;   by using millions of  "naked short" trades on the British pounds sterling currency in global "FOREX" foreign exchange markets,   to effectively, illegally counterfeit the amount of British currency (pounds sterling) in existence at that moment - make it appear as if millions more pounds were in circulation than actually existed -
thus driving their apparent price down long enough to execute the swindle.

The evil traders artificially drove the price of the pound down long enough for them to make fortunes purchasing now devalued pound denominated assets in currencies they had prepositioned themselves in before their treasonous,  criminal,  insider-trading SABOTAGE,      ORGANIZED FINANICAL ATTACK on the pound...
their TREACHEROUS, PREMEDITATED ATTACK on the wealth of millions who had their life savings invested in pound denominated stocks, savings, (currency) and assets and who believed they were being "protected" by the very insiders who picked their pockets and fleeced their bank accounts, pension funds, and life savings!)

"billions for DHS to 'provide security'... WHILE we SABOTAGE America's borders!"

right on schedule, stepping up to the microphone to smear, demean, and blast anyone standing up to  or  confronting the  Neo-Cons' foul train  of  TREASON and RUIN they are inflicting on America (and the world):


Clearly, Peter King is  giving Senators 'Miss' Lindsey Graham, and Vietnam secrets-spilling  Prisoner of War "songbird McCain"  &  ISIS TERRORISTS in SYRIA SUPPORTING  Senator John McInsane a run for the money in the "TREASONOUS DEVOTION to  PIMPING EVERY  NUCLEAR THREAT, and every WAR ON TERROR extortion and ATROCITY coming out of the Israel war lobby"  department.

Just to remind, here's the video that every Democratic  voter in America should know by heart:  an 11 second clip of Congressman Peter King, on the White House lawn with then incumbent President George W. Bush on  election day (Nov. 2004) arrogantly spilling the beans:

"The ELECTION of 2004 was RIGGED by Republican operatives"
(for example, the vote-counting computers for the critical  Ohio elections were housed in... the same building, in Tennessee, that housed the Tenn. George W. Bush For President Republican Campaign Committee!!)

Peter King On the 2004 Elections:
"It’s all over but the counting and
WE will take care of the counting" -
[tens of millions of Democratic voters be damned!]

THE REASON that DEMOCRATIC VOTERS  should KNOW THIS VIDEO CLIP BY HEART,

is because the  TREACHEROUS John Kerry & Nancy Pelosi/Rahm Emanuel  'DEMOCRATS' who gained control of Congress in the 2006 mid-term elections  REFUSED TO INVESTIGATE CLEAR & BLATANT  VOTE FRAUD  by their Republican opponents in the 2004 or 2000 presidential elections...

because even then, in 2006-2007, the Democrats
( as well as the Bush-Cheney-Wolfowitz-Chertoff-Bolten-Bernanke Republicans)

were BEHOLDEN to the JEWISH WAR LOBBY -

- and  the Pelosi/Kerry Democrats  knew that
EXPOSING the CRIMINAL THEFT of a SECOND  major U.S. presidential election,

would trigger massive  American public  outrage and bring stinging action down on the heads of the infernal, "NEO-CON"  AIPAC  war-lobby ELECTION STEALING TRAITORS...

and their COMPLICIT  partners in crimes, bribes, graft, corruption, insider trading, wars,  treason & extortion in the 'DEMOCRAT' Party, as well !! 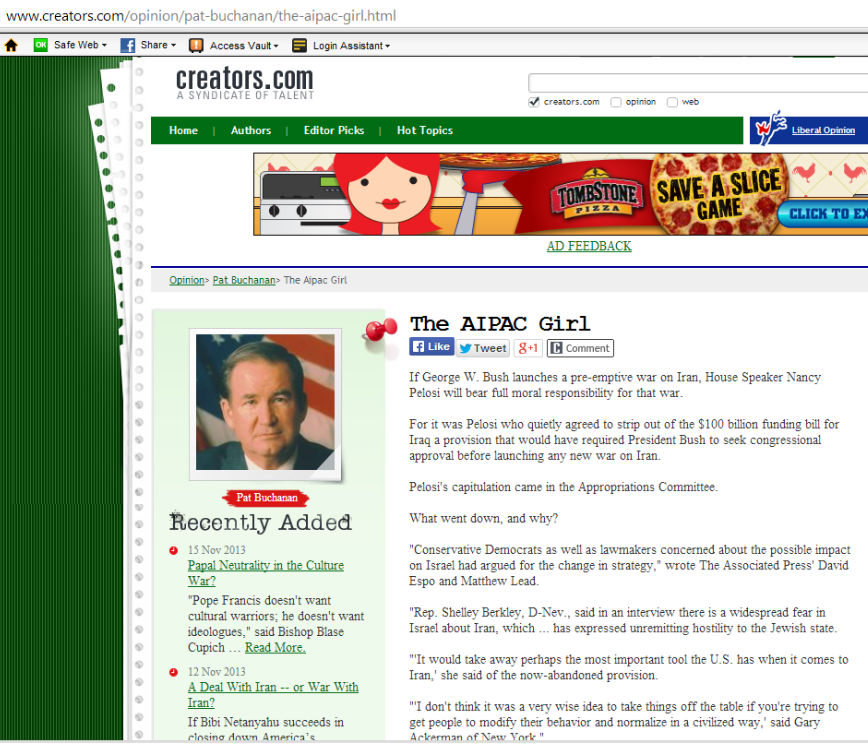 In case you think we are exaggerating in putting Hillary in same basket as Cheney and Bush, this cartoon captures just how slavish Hillary is to the same expanding wars and JUDEO WAR LOBBY INSTIGATED GENOCIDE as Cheney and Bush were.  Just realize  that a U.S. attack & invasion of  Iran would make the U.S. invasion of  Iraq in 2003 look like a tea-party in comparison; both in number of American troops killed, injured, and traumatized for life;  in costs to American taxpayers;  and in the number of  children and civilians killed, wounded, poisoned, traumatized for life, and terrorized & displaced in the demonic jewish war lobby's  lusted-for war of genocide, mass-murder & extirpation there 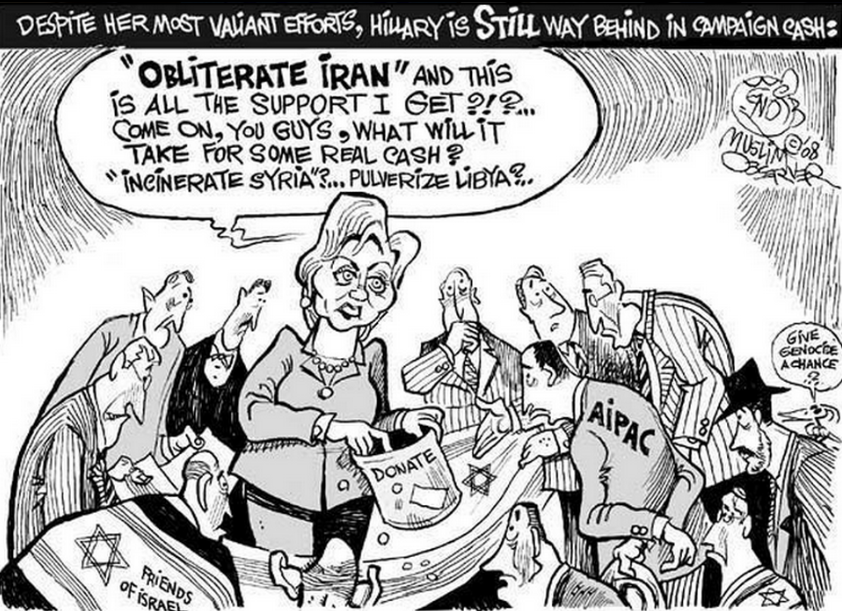