CHUCK SCHUMER TAKES UP WHERE despised Jew COMMISSAR LOIS LEHRNER left off: Trying to USE the IRS to INTIMIDATE and SHUT-DOWN political opposition groups in the (late) 'United' States of America...

JEWISH Senator  Chuck Schumer is a   DISGRACE, a  blatantly racist and genocidal JEWISH SUPREMACIST,  masquerading as a "liberal Democrat Senator" who is perfectly willing to use U.S. government agencies in a TERRORIST and CRIMINAL manner... to SHUT DOWN  FREE SPEECH in America.
Take note of the jewish senators's demonic fury:   the 'Tea Party', while far from perfect, REPRESENTS the  millions of  REPUBLICAN VOTERS who have become DISGUSTED with the  BLATANT  CORPORATE CORRUPTION, serial LIES,  police state barbarity, &  WARMONGERING  BLOOD-LUST that has overtaken the candidates and incumbents of the entire Rethuglican Party... all of whom are nothing more than hired hands & mouthpieces for the demonic JEW WAR LOBBY & "money power" economy wrecking global financial extortionists. 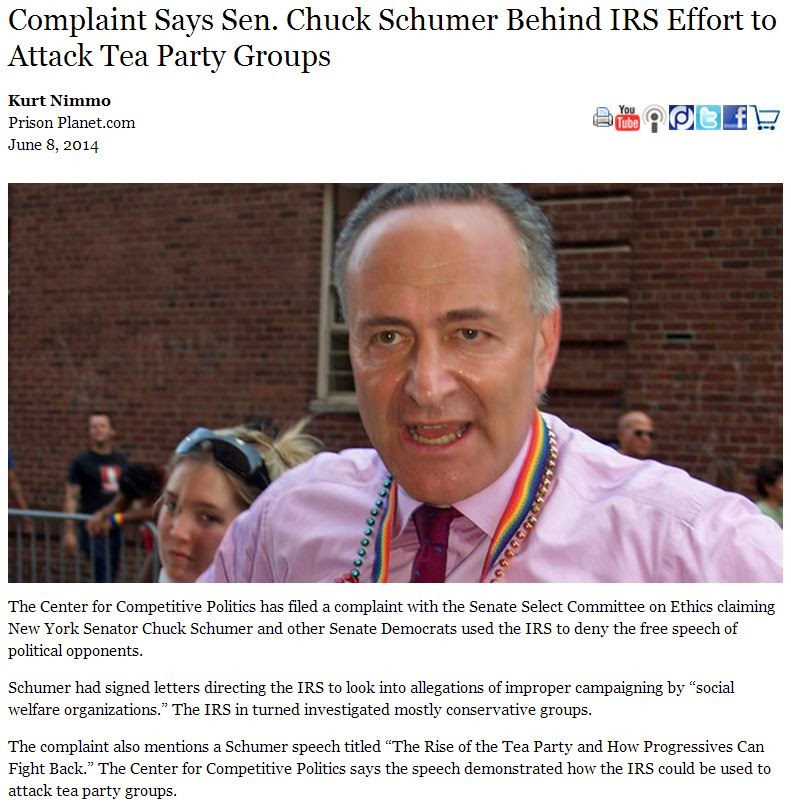 as he, Trotsky,  used the powers of  the Communist secret police & firing squads to just - 'whoopsie!' -   EXTERMINATE MILLIONS of  Ukrainians, Russians,  & other ethnic nationals,  workers, farmers, and land-owners   in the former Czarist Russian empire, CRIMINALIZED by the Commissar thugs  for  any "crime" from STRIKING in factories for better conditions, to  daring to... exercise FREE SPEECH to hiding (condemned as "HOARDING") food from the COMMISSAR FOOD SEIZURE squads...
(exactly the same way that so-called "liberal Democrat" president FRANKLIN D. ROOSEVELT's  TREASURY SECRETARY,   the very jewish HENRY MORGANTHAU,  __OUTLAWED__ and PROHIBITED the ownership of gold,  under a similar "HOARDING"  scapegoating  GOVERNMENT  DICTAT rubric... here in the "home of the free" United States of America!!)


Complaint  Says N.Y. Senator Chuck Schumer Behind IRS Efforts to
TERRORIZE Political Opposition Groups in America
(it's the judeo "EXTERMINATE anyone who doesn't like our EXTORTION & ENSLAVEMENT demands"  way)

For those who say "WE ARE ANTI-SEMITIC!" for pointing out the grim reality behind CHUCK SCHUMER's  anti-American  TERRORISM hiding-behind-official-government-agencies,  we merely say,


A dozen+ years later, Schumer is wearing his judeo supremacist  "TERRORIZE  EVERYONE  NOT party to the tribe's TERRORIZE and EXTORTION plan"  stripes loudly on his sleeves...

the thuggish New York judeo supremacist demagogue is IN LEAGUE with the RADICAL RIGHT-WING  'Neo-Con'  REPUBLICAN  JUDEO SUPREMACISTS on 99 out of 100 issues...
and is  FAR, FAR, FAR  MORE CORRUPT  and ANTI-AMERICAN that Al D'Amato ever was.**

**(note: as a lobbyist "PLAYER" in New York,  D'Amato answers to... and takes his paychecks from - the same JUDEO "MONEY POWER" financiers and WAR PIG PROFITEERS who fund Schumer and all the other sell-out 'Democrats' like him... as well as ALL the  major Rethuglican office-holders _and candidates_, as well.)

WERE  NEW YORK wealthy JEWS  __REALLY__ RESPONSIBLE for the  'Russian' COMMUNIST REVOLUTION in 1918... and  all the   RED TERROR  mass-murder PURGES,  SLAVE LABOR GULAGS, and GENOCIDAL FAMINE terror mass-murders that followed ?????? 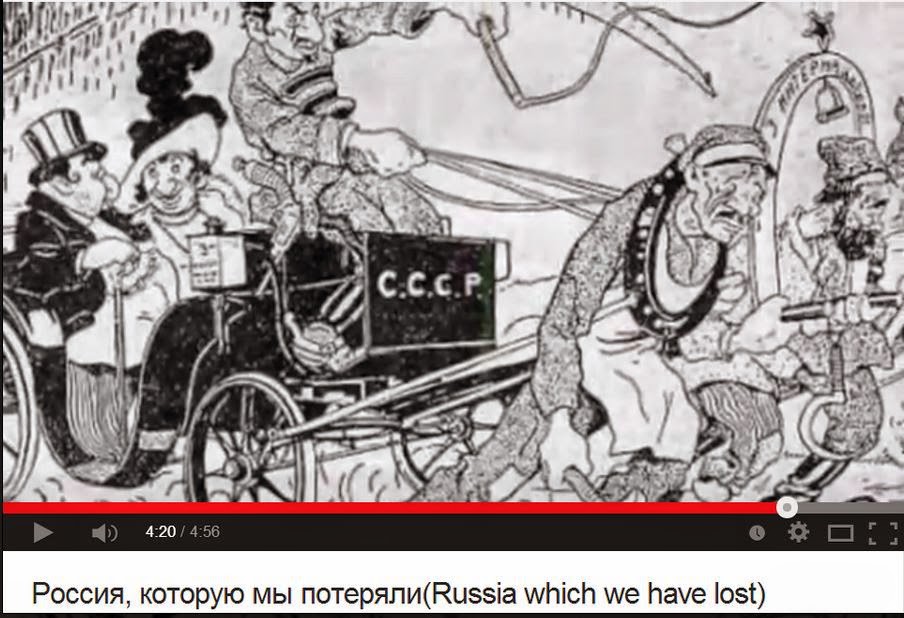 Sadly, let's put a little  real, cold substance behind the above cartoon:
THERE CAN BE _NO_ DOUBT that  "Leo TROTSKY" was a... NEW YORK JEW,  LEV BRONSTEIN,  and  his wire-rimmed glasses were  the signature of the jewish literate "elite"
(at a time when many millions of Russian, Ukrainian, Belorussian, and other 'subjects'  & peasants of the former Czarist empire were illiterate);
and that TROTSKY  was the ARCHITECT of the ruthless MASS-MURDEROUS, "EXECUTE HUNDREDS" policies of the Communist Party  secret police.during and after the 1918 "Communist Revolution"  and  mass-murder TERROR PURGES that followed.

The below video claims that THREE SEPARATE WAVES of FAMINE TERRORS - the "Holodomors" - were INFLICTED ON the PEOPLE of the UKRAINE, by the criminal, thug, sadistic  bosses of the COMMUNIST PARTY...
many of whom (if not the preponderance of whom)  WERE of  JEWISH ethnicity...

We'd love to add further substance  to our statements  that LEO TROTSKY was a NEW YORK JEW, FINANCED by the JEWISH 'MONEY POWER'
(which also precipitated the 'GREAT WAR' of 1914)
and that Bronstein  Trotsky was PERSONALLY RESPONSIBLE for the FIRST of  at least THREE WAVES of  MASS-MURDER TERROR, FAMINE, and SADISTIC GULAG DEATH CAMPS  inflicted on the PEOPLE of the UKRAINE & Russia (etc.)...

but after researching that demonic rabbit-hole over the past 2 weeks,  our brain-circuits are completely overloaded
(more to come later. To preview our discussion of THE JEWISH ROOTS of  MASS-MURDER, RED-TERROR GENOCIDE, slave death-camp Gulags, & brutal Commissar COMMUNISM  in the below videos)

Can we _prove_  that the below quote,  attributed to Trotsky, was actually made by him?
NO, we can not.  HOWEVER... it CERTAINLY  FITS IN with EVERYTHING WE KNOW about the Commissar BLOODBATHS and REIGN OF MASS-MURDER & TERROR over the people of the formerly Czarist Russian empire that spanned the the next 4 horrible, grim, bitter  decades..

St Petersburg  from 1907 to 1918: "In October 1918  Leon Trotsky (born Lev Davidovich Bronstein)    "We must turn Russia into a desert populated by white negroes upon whom we shall impose a tyranny such as the most terrible Eastern despots never dreamt of. The only difference is that this will be a left-wing tyranny, not a right-wing tyranny. It will be a red tyranny and not a white one. We mean the word 'red' literally, because we shall shed such floods of blood as will make all the human losses suffered in the capitalist wars pale by comparison. The biggest bankers across the ocean will work in the closest possible contact with us. If we win the revolution, we shall establish the power of Zionism upon the wreckage of the revolution's funeral, and we shall became a power before which the whole world will sink to its knees. We shall show what real power is. By means of terror and bloodbaths, we shall reduce the Russian intelligentsia to a state of complete stupefaction and idiocy and to an animal existence." — From the 'Memoirs of Aron Simanovich', quoted in The Nature of Zionism by Vladimir Stepin, Moscow, 1993, and translated from Russian into English by Clive Lindhurst.


but we CAN demonstrate that  EVEN TODAY's  JEWISH 'intelligentsia" are  AWARE of the role that  PROMINENT & POWERFUL  _JEWS_  played in the RED TERROR MASS-MURDER & GENOCIDE  purges, death-camps gulags, and intentional-starvation famines... no matter how much they may try to hide those infamous names behind STALIN's...

and this below article, by the very jewish JTA,  we get a back-handed acknowledgement that the  "HOLODOMOR" INTENTIONAL FAMINE GENOCIDE of the Ukraine was at least partly run by "Soviet" COMMISSAR JEWS...  for the simple reason that MOST of the NAMES on the list of  COMMUNIST  officials who perpetrated the  food seizures and mass-terror executions... WERE JEWISH !! 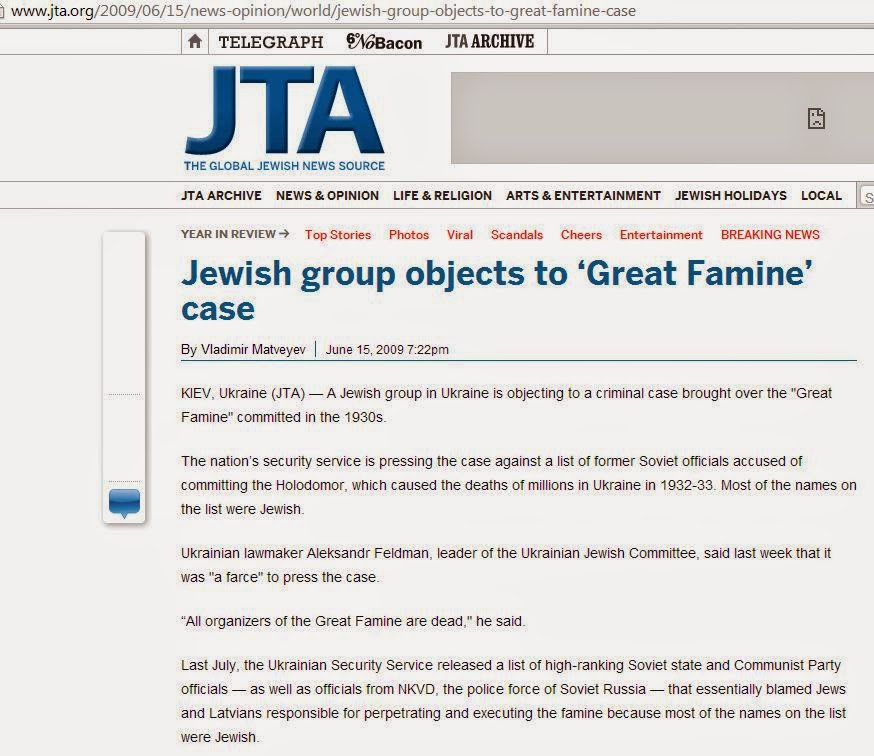