Senators John McCAIN and LINDSEY GRAHAM are both CARTOONISH SELL-OUT TRAITORS who are SUPPORTING the AL QAEDA jihadi TERRORIST INVASION of Syria on behalf of their Jewish war-lobby puppet-masters  -  the McCain, Graham, Obama, & Kerry (et al)  supported  AL QAEDA TERRORISTS are   EXTERMINATING  CHRISTIAN villages by the score in Syria - and USING SAWS to execute victims by cutting them in half  - including little girls! 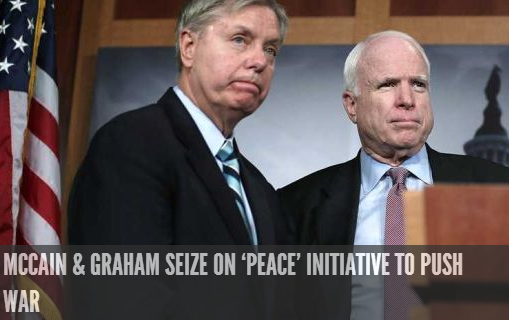 below:  We apologize to our readers for including the below gruesome photo-montage of  WAR CRIMES in Syria PERPETRATED by  the U.S. & jewish war state INSTIGATED, SUPPORTED, FUNDED, DIRECTED, and LED  al Qaeda JIHADI TERORISTS..   we simply feel compelled to  CONNECT the al Qaeda JIHADIS SUPPORTING  Rethuglican Senators John McCain & Lindsey Graham, TO their INNOCENT VICTIMS  being KILLED BY THE THOUSANDS in Syria.... 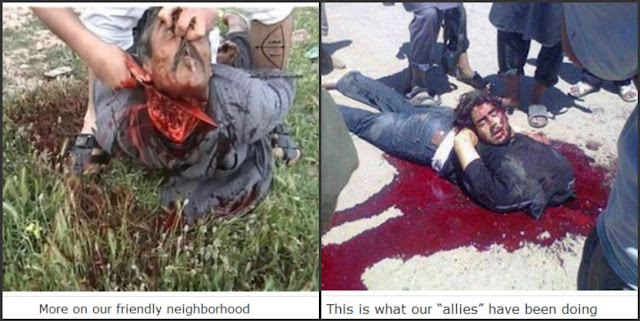 by Michael Snyder,  The American DreamSeptember 10, 2013

Should the United States be allied with radical Islamic jihadists that dismember little girls while they are still alive?  That question sounds ridiculously absurd, but that is precisely what Barack Obama is proposing.  Obama wants the United States to go to war so that it will be easier for al-Qaeda Christian killers to take over Syria.  What you are about to read should absolutely shock you.  Please send it out to your friends and share it everywhere that you can.  If America willingly sides with psychotic, murderous savages that behead little children, it will bring a curse upon our nation.

It is imperative that the American people be told the truth about this.

Mother Agnes Mariam el-Salib is a Catholic nun and mother superior of St. James Monastery in Qara, Syria.  She has been living in the country for about twenty years, and she has been very active in reporting what has actually been happening on the ground inside Syria.
Posted below is an excerpt from what she told RT the other day.  According to her, the Syrian rebels have been brutally beheading people wherever they go and they even dismembered one little girl with a frame saw while she was still alive…
In the village of Estreba they massacred all the residents and burnt down their houses. In the village of al-Khratta almost all the 37 locals were killed. Only ten people were able to escape.
A total of twelve Alawite villages were subjected to this horrendous [OBAMA, KERRY, and JEW WAR STATE instigated] attack. That was a true slaughterhouse. People were mutilated and beheaded. There is even a video that shows a girl being dismembered alive – alive! – by a frame saw. The final death toll exceeded 400, with 150 to 200 people taken hostage. Later some of the hostages were killed, their deaths filmed.
What Mother Agnes is saying lines up very well with what is being reported in major international publications such as the Daily Mail…
Terrified Christians claim Syrian rebels ordered them to convert to Islam on pain of death when they ‘liberated’ their ancient village.
Opposition forces, including fighters linked to Al Qaeda, gained temporary control of the Christian village of Maaloula after fighting with regime forces.
The reports have reignited fears about western support for the rebel groups, which are increasingly being infiltrated by Islamic extremists.
According to eyewitness accounts quoted in that same article, innocent Christian villagers are being given the choice to either convert on the spot or be summarily executed… (cont'd)

below screen-shot,
the video has been "PRIVATIZED" and is no longer available for public viewing

The [above]  video  [screen-shot], when described as “police state behavior” meets that criteria.  If any readers have the names and home addresses of any of the police involved, please put them in the comment section.
We believe these officers and their families need to be under public scrutiny
for participation in criminal activities and living off the earnings of criminal enterprises.
Where was the NRA?
Where was the Tea Party?
Where was the American Legion?

WE are all al-Qaeda now, IF Obama [simply] Says So?

(Even as HE,  Senators Lindsey Graham & John McInsane, JOHN KERRY, HILLARY CLINTON, and all the other TREASONOUS   "American" politicians have been SUPPLYING  AL QAEDA JIHADI TERRORISTS IN SYRIA  - and before that LIBYA - for 2 1/2 years with BILLIONS of dollars of funding & support to KILL INNOCENT SYRIANS by the TENS of THOUSANDS !!!  AMERICA HAS GONE INSANE, because of the TREASONOUS JEWISH LOBBY within our midst.)