In one magnificent 20 minute video, Alex Jones goes boldly where the 'mainstream media' is TOO COWARDLY and far to greedy, complicit, & corrupt to go... and   EXPOSES  our nation's SECRETARY of STATE   JOHN KERRY as being a sordid member of a demonic, sadistic, mass-murder & death  pimping SATANIC DEATH CULT;  and as well Mr. Jones' takedown is so exceptional that in that same short 20 minute video he also  DEMOLISHES two other icons of the so-called "Liberal Democratic left" - msnbc politics-talk show host CHRIS MATHEWS and D.C.'s  non-voting Con-gres woman -   both WLLING PARTNERS TO  and COMPLICIT IN that awful, metastasizing,  sordid, death-camps & wars mentality and agenda;
CHRIS MATHEWS   ADMITTING  to TREASON,  and a propaganda-lies spewing party to CRIMES against humanity, the mass-murder, terrorism, and genocide of tens of thousands of hapless Syrian civilians by U.S. government and military supported AL QAEDA jihadi TERRORIST, GENOCIDAL PURGES in Syria -


"WE HAVE a SECRETARY OF STATE who has asked entities to enter  his body  while having sex  in large vats of feces with men peeing on him..."
[as part of the sordid, satanic, anti-American "Skull & Bones" initiation rites for high-level initiates] 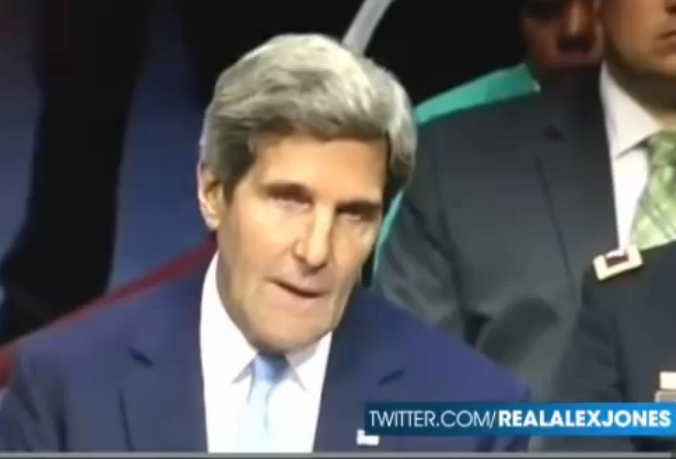 "Do you know what goes on at Skull & Bones?    They have sexual rituals, some of the most ancient, Egyptian rituals where they believe they are possessed by

JOHN KERRY ladies and gentlemen, is a member of a SATANIC DEATH CULT.
[so] NO WONDER he wants to start WWIII
I mean, what do you call it psychologically...
THEY BELIEVE ENTITIES POSSESS THEM in vats of feces

These are people who get in coffins HUNDREDS OF TIMES IN GIANT PITS of FECES and HAVE SEX WITH EACH OTHER.   ."

this is a 2 part blog-post:  As Mr. Jones exposed in his masterpiece  video rant about JOHN KERRY's DEMONIC, satanic  'skull & bones' DEATH CULT WARMONGERING,   above,   he ALSO CATCHES  Chris Mathews ADMITTING  to TREASON!

Mathews    ADMITS that  "THE EVIDENCE" that KERRY and OBAMA TROTTED OUT to "prove" that Syria's Assad army  used poison gas in attacks on civilians is at best uncorroborated.. and at worst is abject treason, the president and secretary not only LYING to the American people, but  FRAMING  VICTIMS and the innocent party, for CRIMES AGAISNT HUMANITY, PERPETRATED by the very  terrorist jihadi forces BEING SUPPLIED BY  Obama, Kerry, McCain, and all the other LUNATIC TRAITORS
who think their next payola graft/kickback slush-fund paycheck from the genocidal jewish war lobby is MORE IMPORTANT than the health, welfare, and well being of tens of millions of Americans (much less Syrians... and everyone else in Mideast).

...and then  CHRIS MATHEWS, who has made millions upon millions of dollars PIMPING this  awful, evil, treasonous  "Neo-Con" spreading wars for fun-and-profit agenda as an MSNBC politics talk show host,    actually "jumps the shark" -  right there in broad daylight,   'mainstream 'news' [retch] corporate media whore & traitor CHRIS MATHEWS  ADMITS that HE believes it is MORE IMPORTANT to BOMB AND KILL human beings to "BACK UP THE PRESIDENT,"  than to focus on and expose  Kerry and Obama's  LIES  TO CONGRESS and the American people,  lies attempting to justify a NAKED WAR of AGGRESSION and MASS-MURDER GENOCIDE by a nuclear armed giant against a small country  that is already besieged by U.S.  and evil jew war state instigated, directed, and supplied  AL QAEDA jihadi GENOCIDAL, mass-murderous  TERRORISTS in a proxy army invasion of that tiny besieged nation!

Alex Jones (paraphrase)  "For their power, they admit its all a big lie to divert everybody, so Obama can start a war that might lead to WWIII..."

Chris Mathews is caught here in his own foul, sordid, disgusting, mass-murderous words...

ADVOCATING that the Democrats VOTE FOR WAR against Syria, rather than force President Barack Obama to concede that HE LIED when he told the American people that "the ASSAD ARMY had used poison gas against civilian victims in Syria"... when in fact it was [obama's] AMERICA'S OWN JIHADI  al Qaeda TERRORIST ALLIES who had perpetrated the crimes

- just one small portion of the WAR CRIMES that OBAMA & Netanyahu, the CIA,  mossad,  and UNITED STATES Con-gress & government have unleashed on the hapless Syrian people...


Confirmation of the above:

NOTE how in our below screen-shots of the Huffington Post web-page about Chris Mathew's insane comments,
the  NAZIesque WAR-PIMPING  demonic PROPAGANDIST TRAITORS  at the evil HUFFINGTON POST
use the benign word "INTERVENTION" to mean...  a  NUCLEAR ARMED  United States military ATTACKING, BOMBING, and mass-murdering people in a (comparatively) small nation...
that has already been besieged and attacked for the past 2 1/2 years by the US, jew-state, Saudi, Qatar, Bahrain, Turkey, Britain, & France, NATO  (et al) financed AL QAEDA JIHADI  TERRORIST INVASION!!


- yes, ladies and gentlement... the above horror headline - "we MUST support KILLING SYRIANS  by the thousands, rather than  EXPOSE   the Democrats' nominal 'Party leader' [war-pimping puppet!]  BARACK OBAMA as a LIAR,  a warmonger,  and  an AL QAEDA SUPPORTING TRAITOR"
- is FROM the so-called "liberal media" editors and publishers at the  HUFFINGTON cowardly, lying, serially treasonous  Post !! - 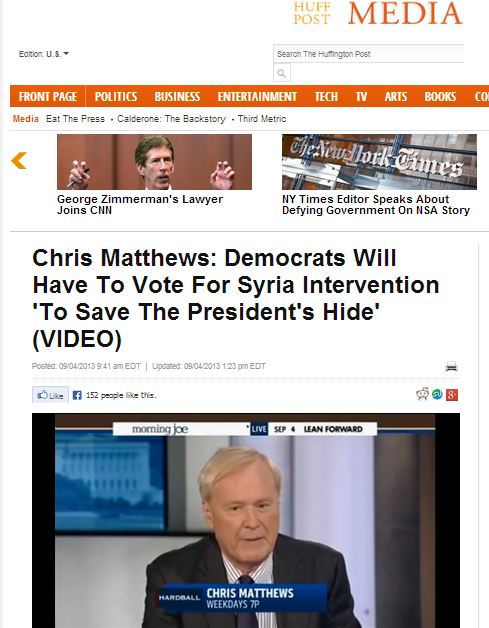 update:     HERE  is the DEMONIC, satanic skull & bones TRAITOR  john Kerry - PIMPING  MASS-MURDER WARS, on the words of  THE CAESAR that  America's TREASONOUS  jewish 'Neo-Con'  warmongers have made of our presidency and government -  just contrast this foul, demonic  SKULL & BONES WAR PIG today with his  ANTI-WARS 2004 presidential campaign rhetoric,  or   OBAMA's  own 2008 presidential campaign rhetoric,

with this headline and awful story,      TRAITOR JOHN KERRY and barack Obama and the host of jew traitors behind them,  believe that THEY CAN START A MASS-MURDEROUS OPEN ENDED WAR,  as easily as Americans can call in  for a pizza to be delivered for a dinner meal!

john Kerry,  YOU are a DEMONIC babies-killing  WARMONGERING,  CRIMES-AGAINST-HUMANITY  TRAITOR !!