America - HERE are YOUR TREASONOUS 'Neo-Con' JEWISH TRAITORS whose TOP "foreign policy" PRIORITY is... SUPPLYING AL QAEDA TERRORISTS in Syria WITH MACHINE-GUNS, POISON GAS, and other WEAPONS of MASS-MURDER....

Under the THRALL of the evil  JEWS  running the Obama presidency  and  Senate & House  'national security,' military affairs, and 'foreign relations' Committees...
...and, indeed, under the evil thrall of  the treasonous jews running the ENTIRE  U.S. Con-gress, executive branch, judiciary and corporate media + finance bureaucracies
the  ARMING of  al QAEDA SUNNI mass-murderous  TERRORISTS in SYRIA    to defeat the Assad regime hated by jews,
is  now the TOP  PRIORITY for the 'United' States government's
TREASONOUS  politicians and gov't.  bureaucrats -


THEY ALL SUPPORT  AL QAEDA mass-murder TERRORIST GENOCIDE in Syria...

and everywhere across the world.

When they  tell us that America's foreign policy is aimed at "stabilization,"  what they MEAN is they want to DESTROY and DESTABILIZE _all_ nations in the world until they are rump, factionalized, balkanized, sectarian wracked hell-holes under THEOCRATIC mass-murderous dictators... whether Obama's NATO BOMBED Libya now run by Al Qaeda terror factions; or Saakasvhilli's terrorized  faux democracy in Georgia, or  "Operation Iraqi FREEDOM"  resulting in BOMBS GOING OFF AT FUNERALS every other week in Ira;  or  the Arab Sunni Gulf Oil THEOCRAT DICTATOR states like Saudi, UAE, Qatar, Bahrain, Kuwait - all of which are completely dependent on U.S. military support;  which is to say, those regimes and their royal autocrats are 100% dependent on the jew puppet-masters who run the U.S. military & indeed the entire U.S. government,  with a brutal, iron fist....

That is to say,  under the  EVIL  THRALL of the TREASONOUS  JEWS who have staged a deceitful 'coup d'Etat' and hijacked the United States,    AMERICANS  ARE  now SUPPORTING  Al QAEDA  MASS-MURDER  genocidal, ethnic-cleansing TERRORISTS in Syria, Egypt, Russia (Chechnya)... and everywhere across the globe,   the insane jews want to destroy national sovereignty and replace sovereign, stable, productive nations with THEOCRATIC  MASS-MURDEROUS 'extremists' DICTATORSHIPS -

The  sectarian (religious wars between Sunnis & Shias)  BOMBS GOING OFF in IRAQ today are  NOT considered a "foreign policy FAILURE"  by the evil,  mass-murderous  Jewish Neo-Cons who infest the Obama White House and "Democrat" Senate & Congress, or those jewish Republicans who supported the Wolfowitz-Perle-Feith-Wurmser-Zackheim-Bolten INVASION of IRAQ ...

...balkanization, chopping nations up in to hate whipped factions, and  constant,  mass-murderous SECTARIAN STRIFE  _IS_ now the GOAL  of  evil  judeo run  "United" States foreign policy - as we are seeing in IRAQ, SYRIA and LIBYA and now in EGYPT, Malaysia,  Sri Lanka, and elsewhere...

They  can't help themselves!!    Judeo SUPREMACY is  SO DEEPLY INGRAINED in the jews, that when their president/commissar-king NETANYAHU visits the CONQUERED (from within) & OCCUPIED  "United" States Congress,  the jews who control -  WHO think they  OWN -  Con-gress  couldn't  help themselves from
carefully staging these flags to make the JEWISH STAR DOMINATE the picture!
The flags are carefully staged (not lying loosely) to EMPHASIZE the evil, genocidal, mass-murderous judeo six-pointed star which clearly overwhelms the U.S flag...
and indeed is PLACED OVER the U.S.  flag - this horrific picture taken INSIDE, within the  "U.S" Congress, in the Capitol building!! 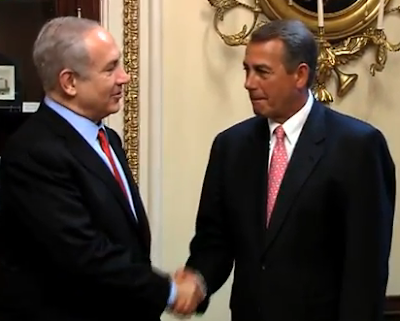 the (late) 'United' States Congress has devolved to TRAINED CLAPPING SEALS, and  AL QAEDA TERRORIST SUPPORTING   genocidal jihadi FUNDERS, under the insane, genocidal,  bronze-age war-lusting judeo supremacist tribe....  in his Appearance before the Joint Houses of Congress (below) - the jew state prime minister GOT MORE STANDING OVATIONS from his terrorized, subservient con-gress critters... THAN ANY U.S. PRESIDENT has ever received! 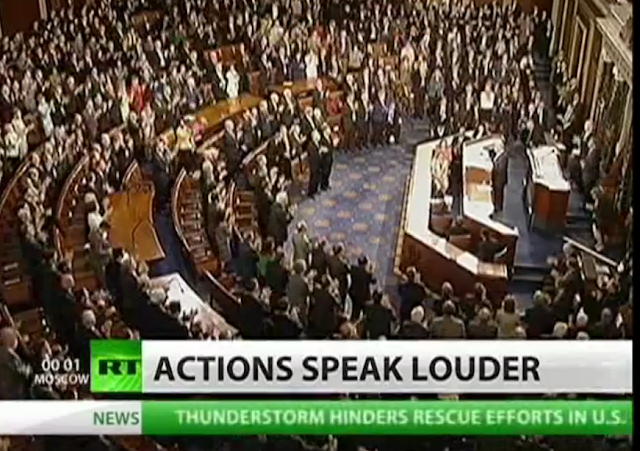 BEIRUT — A rebranded version of Iraq’s al-Qaeda affiliate is surging onto the front lines of the war in neighboring Syria, expanding into territory seized by other rebel groups and carving out the kind of sanctuaries that the U.S. military spent more than a decade fighting to prevent in Iraq and Afghanistan.
In the four months since the Iraqi al-Qaeda group changed its name to reflect its growing ambitions, it has forcefully asserted its presence in some of the towns and villages captured from Syrian government forces. It has been bolstered by an influx of thousands of foreign fighters from the region and beyond...

CIA could begin shipping arms in the coming weeks after clearance from House and Senate intelligence committees
by Paul Lewis in Washington,   The UK Guardian, Tuesday 23 July 2013
http://www.theguardian.com/world/2013/jul/23/syria-rebels-us-arms-shipments-congress 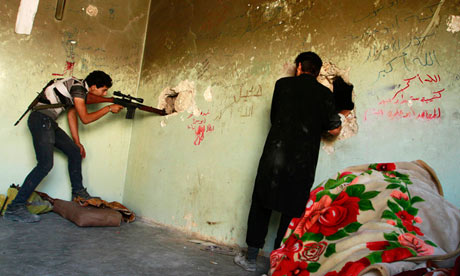 A 'Free Syrian Army'  [U.S. & jew war state supplied SUNNI FUNDAMENTALIST JIHADI!]  fighter aims his weapon as he takes a defensive position in Aleppo on Tuesday. Photograph: Reuters
The CIA could begin shipping arms to Syria in the coming weeks, after two US congressional panels cleared the way for the controversial transfer of weapons.
The [WAR CRIMES PERPETRATING obama] White House announced in June that it would provide limited military support for vetted rebel groups, [a "vetted rebel group" is ANYONE WHO WILL KILL SYRIANS - note the INSANE  TERMS the EVIL JUDEO OWNED MASS-MEDIA uses to camouflage, WHITEWASH CRIMES AGAINST HUMANITY]  which have recently been struggling in their campaign against President Bashar al-Assad.
Republicans and Democrats on the House and Senate intelligence committees have expressed concerns that arms could end up in the hands of Islamist militants fighting in the region – or not do enough to tip the balance in the civil war.  [CONGRESS IS OPENLY SUPPORTING an INVASION of a U.N. member nation!]
Mike Rogers, chairman of the House committee [who SUPPORTS MASS-MURDEROUS hired TERRORIST KILLERS IN SYRIA at the behest of the EVIL, GENOCIDAL JEWS!] , said on Tuesday that the panel had agreed to support the plan to arm the 'opposition fighters' [TERRORIST MASS-MURDERERS]. However, the committee made clear it has only agreed reluctantly and retained serious anxieties about whether Barack Obama's new policy would work. [= the policies of THE EVIL, TREASONOUS, GENOCIDAL JEWS  RUNNING the obama presidency.]
"The House intelligence committee has very strong concerns about the strength of the administration's plans in Syria and its chances for success," he said in a statement, after Reuters reported the decision. "After much discussion and review, we got a consensus that we could move forward with what the administration's plans and intentions are in Syria consistent with committee reservations."  [THE BOUGHT-OFF, BRIBED, EXTORTED, and now TREASONOUS  CON-GRESS WILL SUPPORT GENOCIDE and an TERRORIST INVASION OF SYRIA... as long as there is no political price to pay for supporting the KILLING and ETHNIC CLEANSING of  TENS OF THOUSANDS OF SYRIANS.]
Representative Adam Schiff, a Democrat among the minority on the House committee who opposes sending arms, said: "It's too late to affect the outcome with a small amount of arms."
The Senate committee decided earlier this month that it would back the plan to back the rebels, on the condition they received updates on the covert programme.  [jewish 'American' Senators & Con-gress critters  SUPPORT a PROXY TERRORIST WAR,  and MASS MURDER & ETHNIC CLEANSING IN SYRIA... including the "ETHNIC CLEANSING" OF  SYRIAN KURDS, who COULD live in Syria under ASSAD - but will be TERRORIZED and KILLED by the SUNNI FUNDAMENTALIST JIHADIS the EVIL, TREASONOUS JEWS have gotten the U.S. Con-gress & president to support!]

Both committees have been meeting behind closed doors to discuss Obama's desire to transfer light weapons and ammunition to rebel insurgent organisations, [=THESE TRAITORS in CON-GRESS & WHITE HOUSE ARE SUPPLYING the MASS-MURDEROUS TERRORIST INVASION of a U.N. member nation at the instigation of the INSANE JEWS]  as well as to supply some training.
The timeline for the weapons transfer  ["weapons transfer" is how the insanely LYING and CORRUPT  U.S. & British governments & corporate media describes GIVING WEAPONS TO TERRORIST KILLERS]  is unclear, but reports suggest the process could take place over the next several weeks. Syrian opposition groups have said publicly they hope they will begin receiving the deliveries in August.
US secretary of state John Kerry and other senior officials in the administration have been lobbying hard behind the scenes to persuade Congress to back the new policy.  [the TREASONOUS JOHN KERRY SUPPORTS  KILLING THOUSANDS OF SYRIANS, in order to get campaign donations and other BRIBES and power perks from the evil jew war lobby!]
Obama, who has been reluctant to engage too deeply in the Syrian conflict, changed its position on arming opponents of Assad's regime last month, after concluding Syrian forces had used chemical weapons against civilians. The White House described that development as Assad crossing a "red line".  [A LIE PERPETRATED by the EVIL JEWS - who will PERPETRATE the EXACT CRIMES that THEY  ACCUSE every one of their 'enemies' of doing!]
For now, a limited policy of supplying small arms to rebel groups appears to be as far as the Obama administration will go.
The top US military officer warned senators on Monday that taking military action to stop the bloodshed in Syria was likely to escalate quickly and result in "unintended consequences". Alluding to the occupations of Iraq and Afghanistan, General Martin Dempsey, chairman of the joint chiefs of staff, said that once the US became embroiled militarily in the Syrian civil war, "deeper involvement is hard to avoid".
He said: "We have learned from the past 10 years, however, that it is not enough to simply alter the balance of military power without careful consideration of what is necessary in order to preserve a functioning state."

THE GENOCIDAL,  extorted, and hate-whipped "U.S.A."  Congress is TERRORIZING MILLIONS of Christians, Druze, Allawites... and even jews in the Mideast,
SPONSORING a MASS-MURDEROUS AL QAEDA  PROXY TERRORIST INVASION of Syria that is driving civilians by the thousands to flee for their lives... to IRAQ, where the evil jewish run U.S. military & government  HAS, in the 9 years since the U.S. invasion of  Iraq in March 2003,   SUPPORTED the  SHIA (Shiite) majority... but are now well along the process of  REVERTING to SUPPORTING THE SUNNIS... 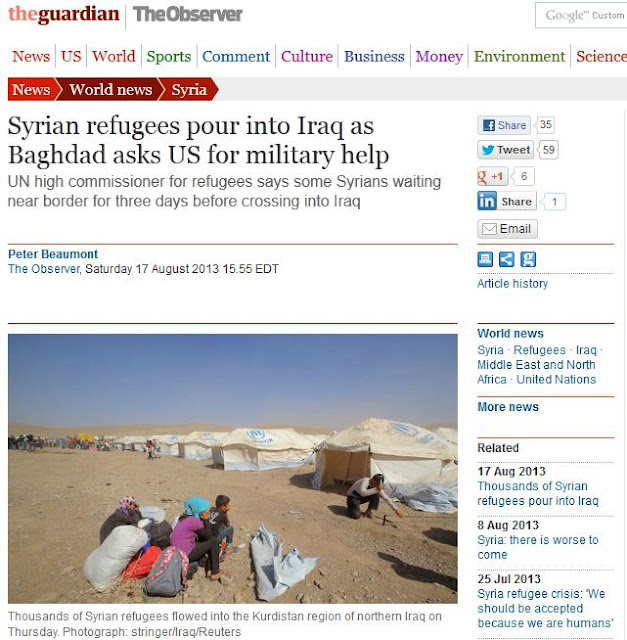