UH-OH, America...! WE'RE IN TROUBLE now..!! IF PAST is PRELUDE, then Ben BERNAKNE & Jacob LEW are going to get us Americans STUCK in ANOTHER GREAT DEPRESSION !!!

Top row:        Jewish  "FINANCIAL EXPERTS"  EUGENE MEYER (left)  as CHAIRMAN of the so-called 'Federal' Reserve very privately owned banking cartel...  and  HENRY MORGANTHAU (right)  as FDR's TREASURY SECRETARY -  collectively, they presided over  both the  onset and  the deepening extension of the GREAT DEPRESSION,   from the late 1920s all through the entire 1930s....

which, sadly, horribly, horrifically,  brings us to today....

below left:    ECONOMY KILLING,  LYING  judeo FED CHAIRMAN Ben "GENOCIDAL BEN" Bernanke is PRINTING  $85 billion per month  ($1 trillion per year... that we know about!) in  FREE MONEY FOR THEM (BANKSTERS), that
shows up as DEBT....
=    GOVERNMENT DEBT that we TAXPAYER SERFS  must "repay" as high taxes =  DEBT SLAVERY for  us peon debt slave Amerikans.

And we apologize for re-posting this montage and  captions, wholesale,  from the end of our previous blog post.
But we think the message needs to be made clearly,   and while the MEDIA WHORES & cheer leading academic whores  can LIE, OBFUSCATE, and COVER-UP the SIMPLEST FACTS with ease
(like the fact that there was a LARGE  POLICE BOMB-SQUAD PRESENCE, complete with "PRIVATE" MERCENARY soldiers, at both the START AND FINISH LINES of the recent Boston Marathon)
IT IS HARD TO OBFUSCATE the simple lesson of a simple picture, like this (above) montage - which says a thousand words in just four little portraits - which is why we are posting it in a separate post.

For years, we have accepted the "generally accepted wisdom" that President Franklin D. Roosevelt's TREASURY SECRETARY,  Henry Morganthau, was
"THE FINANCIAL GENIUS"  who planned,  funded, financed, and oversaw the entire American  "Arsenal of Democracy" economy and  INDUSTRIAL MIRACLE that poured mountains of American war material production into World War II against the Nazis and Japanese, all across the world.

But upon looking closer at Morganthau - specifically his role in the economy BEFORE World War II - we now see that Morganthau was (in all probability) the ARCHITECT of  Roosevelt's infamous 1933  GOLD CONFISCATION ACT -   a troubling episode that DESTROYED the myth of "AMERICAN FREEDOMS,"
for  if you could NOT  legally own or possess a GOLD NUGGET that you dug out of the hills
(or could not legally possess a gold bar, or gold coins that you used to store your saved wealth.... instead of using the suspect, criminally run,  fraudulently overseen "Fed" banking, finance, and stock-market system)....

...well,  just HOW "FREE" are you, if the government can THROW YOU IN PRISON for trying to AVOID the  CRIMINAL, FRAUDULENT  bankers run legal extortion racket  & wealth confiscation gulag that is the Fed bankers banking, fiat-money, and rigged stock-markets system???!!

(and that one issue - GOLD CONFISCATION that BENEFITED the GOLD HOARDING bankster PIGS at the New York 'Federal' Reserve bank -   is just the tip of the iceberg of  so-called "liberal" FDR  Treasury Secretary HENRY MORGANTHAU's  troubling   ___COLLUSION___ with the evil, pump-&-dump, economy wrecking Fed banksters & stock-market swindlers in the years before WWII broke out...)

When "GENOCIDAL BEN"  Bernanke is caught (on video)  saying,
"THE MONEY SUPPLY IS  _NOT_ CHANGING in ANY SIGNIFICANT WAY"
in the below video.... HE IS LYING  through his despicable, economies-killing, GENOCIDAL  (that means "mass murderous") TEETH!!

Ever since the 2008 Market Meltdown
(which was THEIR job to HEAD OFF... LONG BEFORE it happened!)
Bernanke & Yellen and all the other  Fed banksters have gotten their
"DISASTER CAPITALISM"
LICENSE   to PRINT MONEY...

which goes to... BANKERS, and ONLY banksters!

The MONEY SUPPLY  (or "ADJUSTED MONEY BASE" as the Fed calls it)
HAS SKYROCKETED  under  LYING  greedy pig  genocidal Ben since 2008!

YET THAT LYING,  ECONOMY KILLING  PIG  has the entitled, elitist  TEMERITY to go on CBS 60 minutes, and DENY what a simple Fed chart shows clearly... 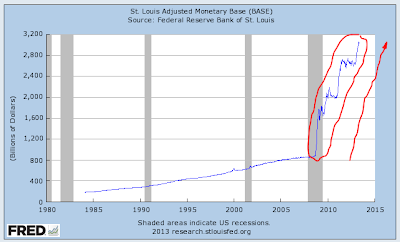 THE FED BANKERS who GIVE THEMSELVES  $85 BILLION in FREE "money" EVERY single  MONTH....

...or  us American, who are DISGUSTED AT the BLATANT  LIES, and the even more horrific fact that  "FREE MONEY for FAILED, FRAUDULENT, CONGRESS-BRIBING BANKSTERS,
shows up as  DEBT  THAT WE MUST REPAY in EXTORTIONATE TAXES for the rest of us peon, debt-slave American taxpayers   ??!!!