"For me the Taliban is on the inside of the [U.S. State Department] building," Nordstrom testified, angry over inadequate staffing at a time when the threat environment in Benghazi was deteriorating...

"THE TALIBAN is on the INSIDE of the [STATE DEPARTMENT]  BUILDING" -  is all too  horribly, despicably, treasonously true...

And as we shall outline in a moment, the  list of
"AL QAEDA SUPPORTING  mass-murderous   TERRORIST SUPPORTING politicians & officials  -  in the U.S. GOVERNMENT - includes the C.I.A., the Pentagon, War Department, & U.S. military high command;  includes  the Obama White House;  and also includes the ENTIRE  U.S. CON-GRESS,  both 'Democrats'  and REPUBLICAN PARTIES, at the instigation of the insane, evil, GENOCIDAL  JEWISH  WAR-MONGERS, both in Netanyahu's  insane genocidal war state, and their TREASONOUS  "support AL QAEDA PROXY ARMIES"  AIPAC,  the Israel-american Political Action Committee; the United Jewish Appeal,  & other jewish lobbies  here in America...

TREASON:    Anti-American TRAITOR  Rupert Murdoch's  FOX 'news',  in TRYING TO HANG an stinking albatross of   SCANDAL  around the 'Democrat'   Obama administration re the September 2012 terrorist attack on the U.S. embassy mission (consulate) in Benghazi,  Libya...

INTENTIONALLY OBSCURES,  WHITE-WASHES, and COVERS UP the far bigger scandal...

...THERE WAS NO  Al QAEDA in Libya, until the UNITED STATES, BRITAIN, FRANCE and NATO -  all at the instigation of the evil judeo war state (israel) blood-drenched warmongers - HIRED, SPONSORED, SUPPLIED, instigated, and COORDINATED their Al Qaeda TERRORIST PROXY ARMY to  "take down"  and kill Muammar Qaddafi, his  secular regime... and tens of thousands of Libyan civilians.

As we reported earlier,  it was  IN THE PROCESS of HIRING  those same AL QAEDA TERRORISTS "fundamentalist Islamic" KILLERS  in Libya,  TO ATTACK  SYRIA
(again  at the TREASONOUS, CRIMINAL  BEHEST of the  "in bed with Al QAEDA U.S. government and  despicable jewish war state under Netanyahu and all his treasonous  jewish 'American' supporters)

that the U.S.  Benghazi "diplomatic mission" - which was nothing more than a CIA  TERRORIST mercenaries RECRUITING OFFICE -  came under hostile "blowback"  fire (attack)  by some of the very terrorist "Islamic fundamentalist" = AL QAEDA   cells that the Benghazi  'mission' was RECRUITING to SEND TO SYRIA to KILL SYRIAN CIVILIANS by the thousands,   in the evil jew war state's  SERIAL GENOCIDAL 'deconstruction' and sowing of chaos and mass-murder in the region.

The September 2008  terror attack on the U.S. 'mission' was probably INSTIGATED
(by a cheap,  insulting,  provocative Hollwood movie production insulting to Muslims,  broadcast to the Muslim world as an intentional agitation by Judeo HATE GROUPS allied with Pamela Geller... and the Mitt Romney campaign)

...by the "MORMON MAFIA" - members of the CIA, Defense, 'intel,'  big finance donors, and State Department communities, all closely allied with the Mormon (dominated) presidential campaign of Mitt Romney,   IN CLOSE ALLIANCE WITH THE JUDEO  WARMONGERS who  have a serial history, going back to at least the "October Surprise" of 1980,  of  ENTITLEMENT to PERPETRATE TREASON against the people and government of the United States
(funding and financing TERRORIST CELLS and TERROR ATTACKS AGAINST installations of the U.S. government)
- in an effort to make the Obama-Biden White House look weak (or even  "treasonous")  mere weeks before the 2012 presidential elections.

As with the prior "October Surprise"  treason that was perpetrated by Republicans and Jews closely tied to the 1980  Bush-Reagan campaign,   the COWARDLY 'DEMOCRATS'  ACTUALLY ARE  GUILTY OF TREASON...   for NOT PROSECUTING the REPUBLICAN  TRAITORS' plots  designed to make them, the Democrats, look bad.

In short -  the EVIL JEWS  feel ENTITLED TO WHIP UP TREASONOUS TERROR ATTACKS on AMERICANS and AMERICAN INSTALLATIONS  at any time they feel that doing so furthers their "Neo-Con"  WARS &  GENOCIDAL MASS-MURDER (sow chaos in Mideast... and Europe, and America!) agenda...

....and because - spearheaded by the DOZEN TREASONOUS JEWISH  'american'  SENATORS on the "Democrat" side of the aisle - including  TRAITOR DIANNE FEINSTEIN,  TRAITOR  CHUCK SCHUMER,  TRAITOR  CARL LEVIN,
and other "Israel UBER America'  'Democrat' TRAITORS -

the  Democrats are  always COMPLICIT in the  COVER UP of those  REPUBLICAN +  judeo-war-state INSTIGATED TREASON attacks on, or UNDERMINING OF,  America's  genuine national security interests.

(In the case of the  1980 "October Suprise,"  rouge elements WITHIN the U.S. GOVERNMENT and REPUBLICAN PRESIDENTIAL CAMPAIGN,   dealing DIRECTLY,  behind the president's back,  with Iran's revolutionaries to HOLD THE U.S. EMBASSY HOSTAGES until AFTER the presidential election, to make Democrat President Jimmy Carter look bad, and get REPUBLICANS  Ronald Reagan and judeo war all GEORGE H.W. BUSH (Sr.) in the White House.)

Rupert Murdoch's  Fox 'news'  spins to  COVERS UP TREASON:  Fox tries to paint the DEMOCRAT Obama White House as the epicenter of the Benghazi terror attack SCANDAL... whitewashing out of   the "mainstream narrative"  two  (2)  other critical points:


EVERY  official named in the below FOX 'news'  story as a "whistleblower" - and as well Ambassador Chris Stevens and the 3 other U.S. consulate officials
killed in the September 2012 Benghazi attack -
were all PART OF   the U.S.   operation to HIRE AL QAEDA TERRORISTS from Libya, to ship to Syria,  to KILL SYRIAN by the thousands.... 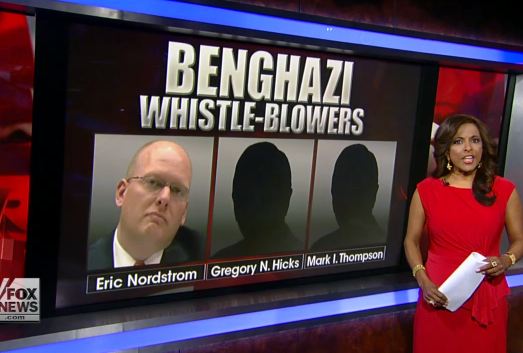 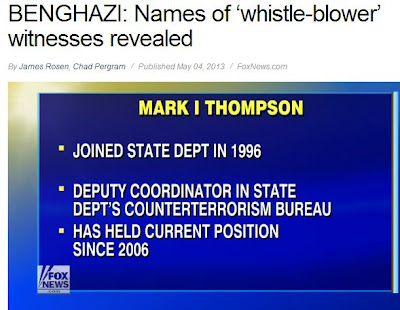 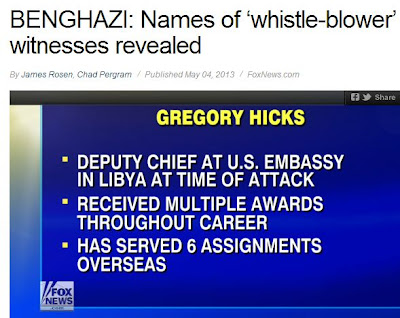 BENGHAZI: Names of ‘whistle-blower’ witnesses revealed
By James Rosen, Chad Pergram, FoxNews.com May 04, 2013
http://www.foxnews.com/politics/2013/05/04/benghazi-names-whistleblower-witnesses-revealed/
...Appearing before the House Oversight and Government Reform Committee will be three career State Department officials: Gregory N. Hicks, the deputy chief of mission at the U.S. Embassy in Libya at the time of the Benghazi terrorist attacks; Mark I. Thompson, a former Marine and now the deputy coordinator for Operations in the agency’s Counterterrorism Bureau; and Eric Nordstrom, a diplomatic security officer who was the regional security officer in Libya, the top security officer in the country in the months leading up to the attacks.
U.S. Ambassador Christopher Stevens and three other Americans were killed in the Sept. 11, 2012, attacks on the U.S. outpost in Benghazi, Libya.
At the time of Stevens' death, Hicks became the highest-ranking American diplomat in Libya.
Nordstrom previously testified before the oversight committee, which is chaired by Rep. Darrell Issa, R-Calif., in October 2012. Of the three witnesses, he is the only one who does not consider himself a whistle-blower. At last fall's hearing, however, Nordstrom made headlines by detailing for lawmakers the series of requests that he, Ambassador Stevens, and others had made for enhanced security at the U.S. consulate in Benghazi in the period preceding the attacks, requests mostly rejected by State Department superiors.
"For me the Taliban is on the inside of the [State Department] building," Nordstrom testified, angry over inadequate staffing at a time when the threat environment in Benghazi was deteriorating,
The other two witnesses have not been heard from publicly before.
Hicks is a veteran Foreign Service officer whose overseas postings have also included Afghanistan, Syria, and Yemen.
Rep. Jason Chaffetz, a Utah Republican and committee member, said Hicks was in Tripoli at 9:40 p.m. local time when he received one of Stevens’ earliest phone calls amid the crisis.
“We’re under attack! We’re under attack!” the ambassador reportedly shouted into his cellphone at Hicks.
Chaffetz, who subsequently debriefed Hicks, also said the deputy “immediately called into Washington to trigger all the mechanisms” for an inter-agency response.
“The real-life trauma that [Hicks] went through,” Chaffetz recalled to Fox News’ Greta Van Susteren, “I mean, I really felt it in his voice. It was hard to listen to. He’s gone through a lot, but he did a great job.”
According to the State Department website, Thompson “advises senior leadership on operational counterterrorism matters, and ensures that the United States can rapidly respond to global terrorism crises.”
Five years before the Benghazi attacks, he lectured at a symposium hosted by the University of Central Florida and titled “The Global Terrorism Challenge: Answers to Key Questions.”    (cont'd)


Well,  does FOX  try to point out that  all of this so-called  "GLOBAL TERRORISM  'EXPERTISE'"  (retch!)  distills down to -
"HIRING  AL QAEDA to KILL PEOPLE BY THE THOUSANDS, and then WHINING when several U.S. government officials who are ACTIVELY HIRING and recruiting  THOSE MASS-MURDEROUS  Al Qaeda TERRORISTS,  actually get a taste of their own medicine?"


And  ALL THIS  STURM AND DRANG -  drama and confusion -  to COVER UP ONE SIMPLE FACT - SOMEONE in the CIA  HIGH COMMAND -  NOT in the Obama White House and NOT in the  Hillary Clinton State Department (though they should have been informed of the situation)  REFUSED  to  SEND MILITARY AID (from bases in Italy) to a U.S.  CIA MISSION/"embassy consulate office" THAT WAS UNDER ATTACK!!

HOW MANY MILLIONS of words will the TREASONOUS 'American'  corporate judeo dominated MEDIA WHORES SPILL.... in order  to AVOID  ASKING THAT SIMPLE QUESTION ??

(which simple question - "WHO COUNTERMANDED  MILITARY SUPPORT for the U.S. CONSULATE  in Benghazi UNDER PROLONGED TERRORIST ATTACK?"   would lead  directly  to the EVIL JUDEO / 'Mormon Mafia"  TREASON attempt to make the Democrats look weak, incompetent, and debased,    immediately before an election by HAVING AMERICAN OFFICIALS KILLED ,   by their own HIRED  TERRORIST cells... )