The Aaron Swartz COPYRIGHT NAZIS 'suicide': Obama DOUBLES DOWN on DICTATORIAL TYRANNY at the behest of his Corporate COPYRIGHT BULLIES and Big Finance puppetmasters...


Not content with letting the courageous Iraq war-atrocities whistleblower Private Bradley Manning rot in a U.S. prison cell - not for TORTURING someone to death,  not for killing innocent civilians in a midnight U.S. army raid on civilian homes in Afghanistan, not for making millions or billions of dollars of U.S. war(s)  spending disappear down a rat-hole of government complicit corruption,  but merely for releasing to the American public the Army's own video of U.S. helicopter gunships gunning down over a dozen unarmed Iraqi civilians in Baghad in 2007
-  the increasingly foul and dictatorial Mr. Barack Obama has DOUBLED DOWN on his  DICTATORIAL REPRESSION and INTIMIDATION of the American people,

"intimidation" of the same sort as the APPLIED TERRORISM of the SLAVERY and SEGREGATION ERAS,

for it was Mr. Obama's OWN SECRET SERVICE  that HOUNDED  INTERNET FREEDOMS and  COPYRIGHT FREEDOMS activist Aaron Swartz to 'SUICIDE',  by  BULLYING  U.S. government prosecutors -  if the government didn't actually stage a murderous ASSASSINATION ATTACK on Mr. Swartz and make it look like a suicide.

Whether or not Swartz's death was a suicide (or murder),  it is absolutely clear that the U.S.  government JIHAD to  HOUND Swartz to death or life in prison began with a SECRET SERVICE led arrest and prosecution that had  the personal approval and  blessings of the increasingly treacherous and ruthless president Barack Obama:

"Why Did The Secret Service Take Over Aaron Swartz's Case Two Days Before He Was Arrested?"


In another article, headline below, note how  presumably "liberal" website TheSmokingGun.com
("liberal" in that 'muckracking' and taking on government corruption has always been an courageous act of trying to restrain government abuses and limit government tyranny , which is the essence of genuine "liberalism")
frames their foul little story on Swartz's suicide as a case of "PRESUMED GUILTY,"  when all Mr. Swartz wanted to do, was RELEASE TO THE PUBLIC,  'scholarly', academic, and magazine article documents stored   on JSTOR's massive computer data-base... release  TO THE AMERICAN PUBLIC  who actually PAID FOR a huge proportion of those articles in government funded research and college, university, and 'think tank' research grants.

Mr. Swartz was trying to break a multi-million dollar MONOPOLY that IS  creating a SEGREGATED, APARTHEID nation in America: one where the rich and wealthy, who can finance a college education, or purchase a JSTOR on-line membership, HAVE ACCESS TO MILLIONS OF DOCUMENTS  which STEER America's government policies on thousands of critical issues and policies,  while  Americans without money for a JSTOR account are FROZEN OUT of research, findings, or articles that they, AS TAXPAYERS, MAY HAVE PAID FOR...  or, as in the case of the foul,  jewish led tsunami  of "LIES TO WAR" leading to the Wolfowitz/Cheney/Bush  IRAQ INVASION of 2003,  may affect millions of American lives.


Before his death, the courageous computer & internet freedoms activist Aaron Swartz was trying to break the bullying, "COPYRIGHT Nazis"  STRANGLEHOLD MONOPOLY on the information available to only those with money (or) in America's (costly and over-inflated) college & university system: the information from research and articles that American citizens need access to in order to participate in an informed and properly functioning democracy.

below illustration:  "COPYRIGHT NAZIS": The increasingly treacherous and despicable Mr. Barack Obama is on the side of SADISTIC government officials, who want to MAINTAIN the bullying APARTHEID, SEGREGATIONIST stranglehold on the information that "ordinary" Americans see, hear, and have access to, by siding with corporate executives, lawyers, and Hollywood moguls pushing draconian,  anti-American copyright laws. 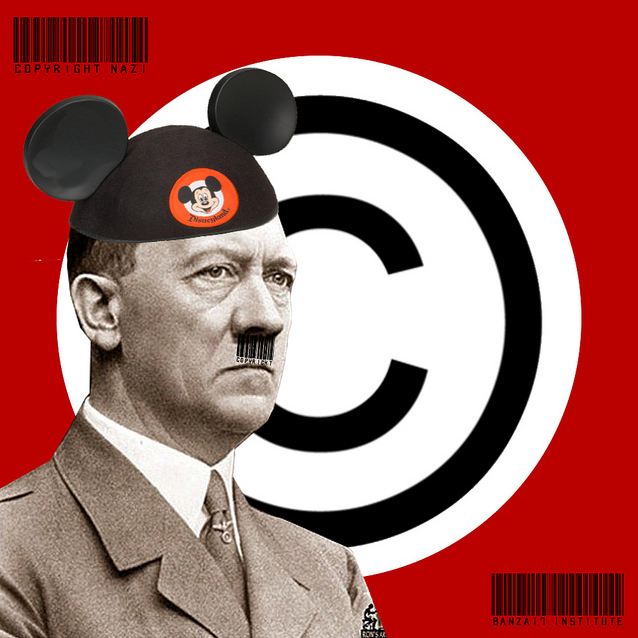 
Why Did The Secret Service Take Over Aaron Swartz's Case Two Days Before He Was Arrested?

Many have noted that the US Attorneys had made a new filing on the day that Aaron Swartz committed suicide. While the filing may look like just a standard procedural filing, some are pointing out that it highlights some highly unusual activity in the case. It had to do with Swartz'smotion to get some of the evidence blocked from being used in the case, over questions concerning how it was collected. But one of the key things that come out is that, for unexplained reasons, the Secret Service took over the case just two days before Aaron was arrested:

MIT and JSTOR conferred regarding methods to prevent excessive downloading. Timeline at 3-4. On December 26, 2010, there was another episode of excessive downloading, which MIT personnel did not learn of until on or about January 3, 2011. On the morning of January 4, 2011, at approximately 8:00 am, MIT personnel located the netbook being used for the downloads and decided to leave it in place and institute a packet capture of the network traffic to and from the netbook. Timeline at 6. This was accomplished using the laptop of Dave Newman, MIT Senior Network Engineer, which was connected to the netbook and intercepted the communications coming to and from it. Id. Later that day, beginning at 11:00 am, the Secret Service assumed control of the investigation.

As Emptywheel points out, it doesn't make any sense for the Secret Service to be involved in such an issue:


According to the Secret Service, they get involved in investigations with:

Downloading scholarly articles is none of those things.   (cont'd)

Foul "MUCKRACKERS"  at TheSmokingGun.com - side with ruthless government persecution, and
ruthless government CORRUPTION and  COLLUSION with the COPYRIGHT NAZIS,
who, in case of JSTOR and America's colleges & universities, are
SOCIAL WELFARE QUEENS, the recipients of billions upon Billions upon BILLIONS of dollars of American taxpayer funded government spending grants, paychecks, tax-breaks, and research contracts...

below: Once again,  The treasonous Neo-Con warmongers & corporate finance whores at HuffingtonPost actually know what is going on - that 'our' government is behaving like the British government during the age of British empire,  expending lives
(of their own men & soldiers, much less exterminating the lives of  "savage" nations including, for example, the Kurdish villages GASSED by British Royal Air Force aircraft in the 1920s, shortly after the end of WWI)
like so many disposable pawns in the many genocidal, mass-murderous wars of British empire -  in this case, the HuffingtonPost editors  posing as saddened by the tragic suicide (or murder) of  Internet FREEDOMS ACTIVIST  Aaron Swartz - even though the Neo-Con pigs at Huffington Post most certainly side with the New York Goddamn-Sachs Financial terrorists,  the "of, by and for israel uber alles" judeo warmongers, and the judeo finance/corporate/Hollywood dominated COPYRIGHT NAZIS....


note:  Mr. Swartz was quite probably (given his last name) of Jewish descent.... which just goes to prove that Jews are increasingly becoming victims of the treacherous, dictatorial, racist, apartheid, dehumanizing, globe-threatening jewish wars, much as many of those suffering repression from the 1848 Rothschilds financed dictator/autocrats/royals CRUSHING of the 1848 Revolutions in Europe were upwardly-mobile, literate, and highly educated European jews.
We regret  that we have not yet published a post we have long had in draft,  "JEWISH VICTIMS of the evil judeo WARS...", but Mr. Scwartz will be among the courageous of-jewish-descent heroes opposing the insane Neo-Con, judeo-supremacist/financial-rapists/global-warmongers agenda...

note also how, if you click on the Huffington Post link for the above video,  the despicable editors at Huffington Post don't really believe that a video of an important story about the suicide of a courageous young internet freedoms activist is really all that important...  for they have another video running at the top of the page, as you may be trying to watch the video (that we have embedded, above) on the HuffingtonPost page with of that video!