JEWISH FINANCE - judeo Financial RAPIST "your superiors have a RIGHT to EXTORT you" Neo-Con finance:  turning MILLIONS of Greeks & other Europeans - and Americans here in the U.S.A.! -  into subsistence DEBT SERFS.

the face of 'modern'  judeo-dominated finance today:  Jon Corzine skips with $1.6 billion stolen from MF Global clients... and gets a "get out of jail free" pass from his pal,  treacherous president "I love titanic banking fraud" barack obama... 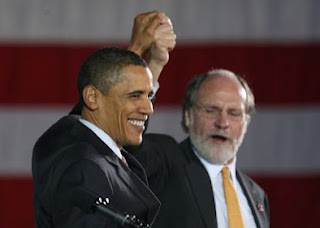 Greeks Raid Forests in Search of Wood to Heat Homes
Jan 12, 2013
Greece just seems to be getting worse and worse.

[but the EVIL FAT-CAT bankers in London, in New York/Wall St.,  in Washington D.C., & in Tel Aviv DON'T GIVE A DAMN: THEY are wealthy beyond belief by SUCKING UP TRILLIONS upon TRILLIONS upon trillions of dollars $$ of TAXPAYER EXTORTED "bailouts" - and they are laughing at the peons being driven to the edge of subsistence living all across Europe.]

Being the leading edge of Southern Europe’s descent into 3rd world status, Greece’s lessons are all of our lessons, as I outlined in my piece last year The Global Spring.  From the Wall Street Journal:

EGALEO, Greece—While patrolling on a recent cold night, environmentalist Grigoris Gourdomichalis caught a young man illegally chopping down a tree on public land in the mountains above Athens.
When confronted, the man broke down in tears, saying he was unemployed and needed the wood to warm the home he shares with his wife and four small children, because he could no longer afford heating oil.
Tens of thousands of trees have disappeared from parks and woodlands this winter across Greece, authorities said, in a worsening problem that has had tragic consequences as the crisis-hit country’s impoverished residents, too broke to pay for electricity or fuel, turn to fireplaces and wood stoves for heat.
END_OF_DOCUMENT_TOKEN_TO_BE_REPLACED

There you have it.  In the long campaign season of 2007 - 2008,  presidential candidate (and then Illinois U.S. senator)  Mr. Barack Obama spent every waking moment pledging to American voters that he would bring "CHANGE!"  from the way the Bush-Cheney Republicans had driven the nation into metastasizing wars in the Mideast (and in Central Asia)  and from the economic malaise that required "BAILOUTS" for the "oh so expert" financiers who had spent the previous 2 decades BRIBING ("lobbying" or "campaign donating")  Con-gress  for  "DEREGULATION" of America's critical financial markets,  which "deregulation" the Bob Rubin, Larry Summers,  Sandy Weil, Hank Paulson (et al, ad naseum)  financial 'experts' promised us, would bring America "FINANCIAL INNOVATION" and end once and forever even the remote possibility of a serious economic downturns.

(Which "economic downturns" were defined,  by the founding members of the so-called 'Federal' Reserve privately owned central banking cartel, in their application to Con-gress for a charter in 1913, as  either rising, massive unemployment, or gyrating prices for the commodities and necessities that average families must purchase and consume to maintain a minimum standard of living.)

WELL,  AFTER GETTING _EVERYTHING_  THEY WANTED for the past 2 decades, the thieving banksters proceeded to do exactly that:  DRIVE THE ENTIRE U.S. ECONOMY INTO THE SEWER  of artificially inflated stocks, homes, and commodity prices, and  they DESTROYED  employment
(by "OUTSOURCING" American industry to China & Asia for SHORT TERM 'PROFITS' for the financial excecs)
thereby creating metastasizing unemployment across America...


The so-called "liberals" web-sites and activists, in their treacherous alliance with the D.C. establishment "Democrat" party under Barack Obama,   are ALLIED WITH the  FINANCIAL RAPISTS in NY, DC, London, & Tel Aviv, in the SABOTAGE DESTRUCTION of national economies and social safety-nets  across Europe and America.