Hollywood anti-American judeo Media WHORES Time/Warner corp. RELENTLESSLY PUSH MURDEROUS, GRATUITOUS gun VIOLENCE and MURDER into American homes and theaters as "Entertainment"... While pimping their JIHAD as corporate media elites to CRIMINALIZE GUN OWNERS in America. As always, the Neo-Con (judeo) appartchik traitors are seeking to create an APARTHEID, SEGREGATED SOCIETY.... with themselves as the elites lording it over the enslaved peons below.....

Finally!  "Alternative Media" realizes that it must  confront the entrenched, mega-corporations of "mainstream" media who are the propaganda arm of the Neo-Con millionaires and billionaires who seek to turn the (late) 'United' States of America into a puppet, slave colony of the jewish war state...
Just as jewish kings David and Solomon extorted and enslaved their neighbors;  just as the Venetian trading empire enslaved their Greek colonies; and just as the British empire enslaved India,  extorting  all of India's gold, precious gems, tea, and other wealth out of their enslaved colony,  and used Indian slaves to grow opium, to push on to China,  to genocidally extort and ruin that Asian empire for the profit of English merchants and bankers.
(With the you-know-who financial dynasty at the apex, the very top of the food chain of that genocidal rape, extortion, and drug-pushing genocidal British merchants/bankers/military "for profit" food chain.) 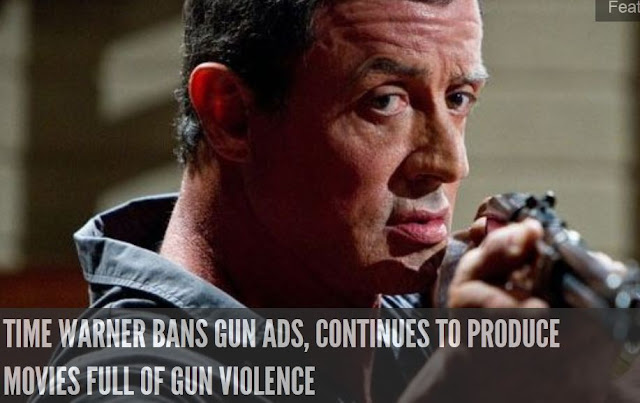 
Despite the fact that its subsidiary Warner Bros. routinely distributes blockbuster movies that are replete with gratuitous gun violence, Time Warner Cable has issued a company-wide ban on television ads that show “guns pointed at people,” another illustration of how firearms ownership is being made taboo to coincide with the Obama administration’s gun control agenda.

“We no longer accept ads showing semiautomatic weapons and guns pointed at people,” Time Warner Cable said in a statement. “We stand by this policy. If it’s essential to a business owner to show this kind of imagery in their commercials, there are other advertising options in the marketplace.”
However, this new found conscience on reducing violent gun imagery will not be embraced by movie productions funded by Time Warner itself and distributed by Warner Bros., such as the upcoming Sylvester Stallone film Bullet to the Head, the trailer for which features a plethora of gun violence, with the poster for the movie being riddled with illustrative bullet holes.