Hilarious: CNBC's (collective zombie) Heads EXPLODE, at prospect of Germany, you know... asking for THEIR gold to be sent back (to Germany) !!

video -  Look at these CNBC media whores babble like the overpaid, fraud enabling monkeys they are, as their heads explode over the prospect that someone, somewhere, might not trust keeping their gold reserves in insanely corrupt lower Manhatten, N.Y.C...   (h/t mk)

Hey, you ignoramus CNBC goons.... if the money base in 2009 was $800 billion - eight hundred billion dollars in savings and circulation - and if by 2013 that money base is in the $2,000 billion
(two thousand billion dollars, or 2.5 times as much) range; that means that any money you had put in a bank account in 2009 or before, is today worth over two times LESS than it was when you put it in the bank...

...all while you CNBC monkeys have been sitting there collecting your "hirelings" CNBC paychecks, for NOT informing Americans about this simple, critical fact of  financial life.

And where do we here at TJW get those statistics on "the money base"? 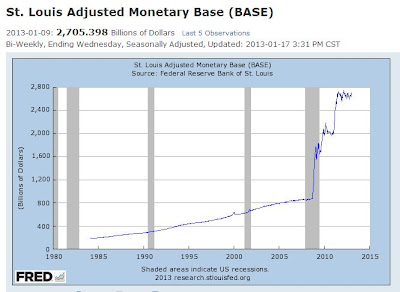 Of course, to get this (reasonably) accurate picture of what 'the Fed'  is doing to the real American economy...
(whose main financial arm is located in New York, and whose main propaganda arm is located in Washington D.C.)
you need to get away from New York,   you need to go to the St. Louis Fed, because NEW YORK is the home of Wall St. PARASITE FINANCE and LEMMING media whore "FINANCIAL EXPERTS," the vast majority of whom were pimping, primping, boosting, whitewashing,  and hard-selling "deregulation," derivatives, fraudulent ratings agencies, "Collaterilized Debt Securities"  & "Mortgage Backed Securities" loan-sharking based "subprime" loans, stocks, & other fraudulent securities, and especially vastly over-inflated real estate prices, right up to the moment of the Market Crash of  September, 2008....

bonus: For all our little piggy N.Y., CNBC "financial experts" friends out there, here's a little story
about how the spider climbed up the water-spout,  just one example of the actual means by which Fed banksters have grossly inflated the U.S. money supply;   just  how they have taken the American money supply from one level of "base money" supply in 2008, to today's far higher base money levels...

...why, then BANKING FRAUD & MARKET CRIMES ENABLER (if not overseer!) and  NY Fed branch President little economic hatchet-man Timmy Giethner,
(Bob Rubin's career toady protege in "ENGINEERED FINANCIAL ATTACKS")
quietly PRINTED OUT OF THIN AIR, and then dished out  TWO THIRDS of a TRILLION DOLLAR$$  to his pals/bosses at the Big NY member/owner banks of the so-called 'Federal' Reserve cabal - in one week, alone!

double bonus: Are the goons at CNBC trying to make a stab at honesty?
Or is it that they just want to be prepared with a "don't say we didn't warn you"... for the day when tens of millions of Americans  wake up to find that they are penniless, their wealth and savings stored in Fed Reserve and Mary Schapiro SEC 'overseen' banks VANISHED, their stocks,  bonds, and savings WORTHLESS...?