They will tell you how GODDAMN-SMART the plague of  Goddamn-Sachs judeo financiers who have infested the judeo controlled Greenspan/Bernanke Fed, Wall St., and  Bush Sr., Clinton, Bush Jr. and now Obama administrations are....

...but cut through the tsunami/avalanche of judeo press/media lies,  it all distills down to

"The Judeo elites, through BRIBERY of Con-gress, presidents, and lesser politicians, backed up by the relentlessly scapegoating -  HATEMONGERING - of innocent victims by the  jewish media,
use GOVERNMENTS as AN EXTORTION ARM to give trillions of dollars of 'bailouts' and other lucrative government funds to 'in the loop'  financial corporations... while STARVING everyone else."


As we've reported, long before there was god's own World War II 'holocaust,'
the U.S. army (calvary) would round up native American ("Indian") tribes... march them off to the most desolate, cold, wind-swept undesirable lands on the plains, and, if the Indian agent pocketed the (already meager) money allocated to provide the Indians with beef and blankets, they would STARVE and FREEZE during the winter...
...at about the same time that Irish Catholics by the millions were RUN OFF THEIR LANDS by the Protestant British backed by the British army,  leading directly to the Great Famine,
the 1-to-3 million killed in  IRISH HOLOCAUST of  1845...

...it's always the same old story,  THOSE WITH ACCESS to and CONTROL OVER  the government and its military, TAKE WHAT THEY WANT... and STARVE the rest.


below illustration:  MONSANTO corp., by BRIBING con-gress, presidents, and politicans,  GETS HUGE BAILOUTS...  the citizens get stuck with SKYROCKETING GOVERNMENT DEBTS and FINANCIAL CRISIS. 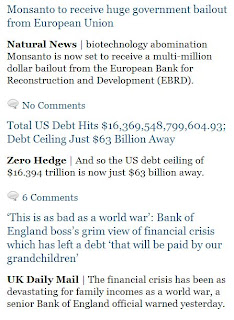 ‘This is as bad as a world war’:
BANK of ENGLAND boss's grim view of FINANCIAL CRISIS
which has left a debt ‘that will be paid by our grandchildren’
UK Daily Mail | The financial crisis has been as devastating for family incomes as a world war, a senior Bank of England official warned yesterday.

bonus: oldie but goodie, the vampire squid(s) get away with medieval (BRONZE AGE!) style loot, plunder, rape, pillage, and exterminate-the-enemy  CONQUEST... while pretending to be oh-so modern, civilized, and "good" for the nations they rape, starve,  and dismember...