Jewish (Neo-Con lite) IMPERIAL COMMISSARS Rachel Maddow and Amy Goodman trot out their "LIBERAL" credentials: DEMAND GUN CONTROL as means to Prevent Violence in America. WHERE is their OUTRAGE at NETANYAHU's jewish WAR MACHINE CORRUPTING AMERICA, BOMBING INNOCENT CIVILIANS all over the world, or Against Team Obama's draconian, "put a bag over their head and DISAPPEAR THEM" - IN AMERICA! - Gestapo POLICE STATE '2012 NDAA; powers??


The main problem with American "liberals" demanding the outlawing of guns after this week's horrible shooting of school children in Connecticut, is that outlawing guns as a means of preventing massacres is proven.... NOT to prevent future massacres.

The Anders Behring Breivik’s shooting rampage in Norway was the worst mass murder rampage on record following the Second World War - in a nation, Norway, with strict gun control laws.

But before we address the nuts-and-bolts of massacres and mass-shootings,  we'll first take a brief look at the state of "liberalism," civil rights,  the rising police state which so-called "liberal" media personalities applaud at every step...  and the similarities between the Neo-Con agenda in America, and the jewish supremacist agenda in occupied Palestine, and the British occupation of Ireland that led directly to the "Great Famine"  INTENTIONAL HOLOCAUST of 1845-1852.
(Which in turn was only one of several mass-murderous famines and massacres that  the conquered Irish endured over several centuries  at the hands of their English colonial conquerors and overlords.)

The dirty secret of jewish policy is,  "SIMPLY DECLARE THEM TO BE TERRORISTS... and you can MACHINE-GUN THEM with impunity."
This of course is the identical policy the German 'Nazis' used in WWII against any and all people they wanted to run off their lands and exterminate,  whether Jews in the Warsaw ghetto, Greeks and Yugoslavs in the Balkans, or Polish or Ukrainian farmers (etc., etc., etc.,  etc.).
﻿
Thanks to the jewish supremacist Neo-Cons MASQUERADING as "liberals" who have taken over the U.S. Congress, U.S. WHITE HOUSE (and here) and entire "American" press/media, and in particular the jewish supremacists who have taken over the  so-called 'liberal' (NOT!) 'Democratic' Party,  (and here),   this above scene is coming to America...  here now... ALREADY. 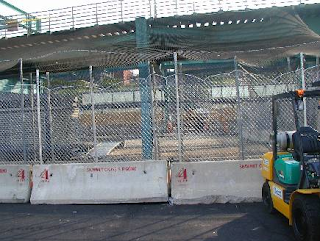 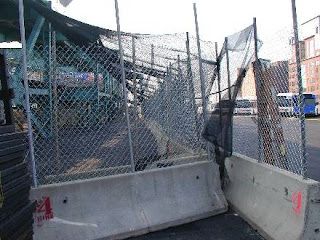 If you can be HERDED LIKE SHEEP  into a BARBED WIRE PRISON PEN,   it is NOT  "free speech"!!

Amy Goodman, Rachel Maddow, and thousands of other ELITIST (well funded) media functionaries POSING  as "LIBERALS"  are anything but -   LOOK AT WHAT THEY DO (business as usual), not at the cheap palaver they say in front of cameras when the cameras are rolling

They are AUTHORITARIAN APPARTCHIKS, who obviously support The POLICE STOPPING AND SEARCHING ANYONE for guns, drugs, or any of the other items of
the Neo-Con  POLICE STATE DICTATORSHIP WAR ON AMERICA agenda.

[yes, according to the Neo-Con friendly whores at Wikipedia, the police & authorities have  - TODAY! -
AS MUCH RIGHT to LOCK YOU UP IN A PRISON PEN for trying to exercise your right to PROTEST unpopular government actions in Amerika... as slave owners had to arrest fugitive slaves in the North before the Civil War!]

...areas set aside in public places forpolitical activists to exercise their right of free speech in the United States. The First Amendment to the United States Constitution states that "Congress shall make no law... abridging... the right of the people peaceably to assemble,  [AS IF  PRISON PENS don't "ABRIDGE" the right to peaceably assemble!]    and to petition the Government for a redress of grievances." The existence of free speech zones is based on U.S. court decisions stipulating that the government may regulate the time, place, and manner—but not content—of expression.

[ BY THIS LUDICROUS STANDARD so blithely pimped by the whores at Wikipedia,  NAZI CONCENTRATION DEATH CAMPS were "FREE SPEECH ZONES,"  because Jews confined to them could say prayers... as they were being marched into gas chambers!]
A free speech zone is more restrictive than an exclusion zone[citation needed].

Maddow: Time for U.S. to get over its ‘hysterical fear’ of gun control  h  http://www.prisonplanet.com/tarpley-middle-east-riots-a-provocation-to-sink-obama.html


OUR SUGGESTION to Ms. Maddow:  since she, like all the other media whores,  is apparently quite useless at protecting American jobs, American free speech, American financial security, and all other American rights,  she should move to israel:  where only jews and the jewish military are allowed to have guns, and Palestinians are forbidden to, which must make her very happy.

Amy Goodman on ‘Up’: ‘Gun control is the answer right now’
http://www.rawstory.com/rs/2012/12/15/amy-goodman-on-up-gun-control-is-the-answer-right-now/

below:
A CONQUERED, DISPOSSESSED, and soon to be starved-to-death people, by, NOT the DOZENS, but by the HUNDREDS of THOUSANDS:

THE IRISH, under ENGLISH OCCUPATION,  were DRIVEN OFF their PRODUCTIVE food producing lands, by British Protestant invaders (and their Protestant Irish local accomplices) backed by British courts, the British army, and above all by  "the MONEY POWER,"  the great financial power that ruled the affairs of England and instructed Parliament on how to go about confiscating Irish Catholic properties, and transferring them "legally" to English or Irish Protestant landlords...

And there is no dispute, the ROTHSCHILDS were at the UNDISPUTED APEX of British empire in the late 1840s;   as we've pointed out, even Harvard graduates George W. Bush and Barack Obama could understand that the Rothschilds were BUILDING PALATIAL MANSIONS all in and around London... as tens upon hundreds of thousands (upon millions)  of Irish men, women, and children STARVED TO DEATH as British overlords REMOVED THE FOOD PRODUCTS FROM IRELAND, and shipped them to England, both to feed the English people, and for profit of the merchant/trader/absentee landlords... and bankers above....

note: the main reason that most Americans, Brits, and even Irish today are not aware of the intentional mass-murder holocaust nature of the so-called Irish "Great Famine," is because not only were the British authorities  and London papers the perpetrators of the crimes and cover-up... but the Irish CATHOLIC CHURCH ELITE were also bribed and coerced to go along, with the pointed message that those church clerics would soon join the starving in the mass graves "of the famine" if they were to make too much of a fuss...
What wikipedia today would call a "free speech zone" clearly extended no further than church grounds.

Oh... and because the Irish had been DISARMED over centuries of British occupation and control... and could not stage a big enough rebellion to force the British owned papers or history books to make even one mention of  Irish resistance to the  genocidal, mass-murderous,  FORCIBLE FOOD REMOVALS from a STARVING LAND !!
﻿


In addition to Brit Piers Morgan and liberal filmmaker Michael Moore, a number of liberal celebrities have responded to the shooting in Connecticut with demands that Americans be stripped of their constitutional right to own firearms.
The wife of former Federal Reserve boss [ALAN GREENSPAN] Andrea Mitchell, calls for “reasonable control” of the Second Amendment.
“America likes guns the way the rest of the world likes soccer,” tweeted comedian and Current TV host John Fugelsang. “Guns don’t kill people. People in states without gun-purchase background checks & waiting periods kill people.”
Evan Rachel Wood wondered what it would take to disarm the American people while singer Michelle Branch told “gun control people” that her “heart is breaking.”
“Gun control is our only road to freedom,” said actor Rashida Jones. “Freedom from the fear of senselessly losing children. I’m so saddened. WE NEED LAWS NOW.”
“Gun control is no longer debatable- it’s not a ‘conversation’- It’s a moral mandate,” actor Mia Farrow tweeted.
Comedian Patton Oswalt addressed the Second Amendment with an obscenity. “Yeah, I’ll wade right the f— into this: MORE gun control, MORE mental health services. It’s no longer a debate. Never was.”
“This year: CO movie theater, OR mall, and now CT school,” tweeted actor Adam Shankman. “How many innocents must die before we enforce more gun control!”

It is a demonstrable fact that tougher gun laws do not reduce crime. Background checks and laws against “assault weapons” and the possession of handguns will do little to prevent future mass shooting incidents.
“No empirical study of the effectiveness of gun laws has shown any positive effect on crime,” the NRA noted in 1996. “To the dismay of the prohibitionists, such studies have shown a negative effect. That is, in areas having greatest restrictions on private firearms ownership, crime rates are typically higher, because criminals are aware that their intended victims are less likely to have the me ans with which to defend themselves.”
The hand-wringing liberal celebrities quoted above are apparently allergic to fact – for instance, the fact that since the so-called assault weapons ban expired in September 2004, murder and overall violent-crime rates have declined. In 2003, the last full year before the law expired, the murder rate in the United States was 5.7 per 100,000 people. In 2011, the murder rate fell to 4.7 per 100,000 people. Gun-related homicide is falling as a record number of people buy firearms, not rising.
“Crime rates alone of cities such as Chicago and Washington D.C. prove that gun bans only increase crime,” Ron Meyer wrote following the shooting in Aurora, Colorado. “The D.C. police response rate is eight minutes; most crimes are done in less than one. Gun bans create a trouble-free world for criminals considering no one can defend themselves. If I were ever to face a situation like this, I would want to be prepared.”

Unfortunately, nobody in the theater was prepared when the shooting started because Colorado has enacted strict gun laws.

Liberals and anti-Second Amendment activists like to say gun violence is rampant in America because of lax gun laws.
They fail to mention, however, that many countries with strict gun laws often experience mass shootings. For instance, 77 people were killed and more than a hundred injured last year in Norway in a mass shooting. [A nation with STRICT gun control laws.]
Anders Behring Breivik’s rampage outside of Oslo was the worst mass murder rampage on record following the Second World War. It stands as an irrefutable testament to the fact gun laws do not prevent mass murder.

Germany has some of the strictest gun control laws on record and yet it experienced three of the worst five multiple-victim K-12 public school shootings in the world in the past decade.

Despite the protests of celebrities and other vocal liberals, millions of Americans understand that owning and receiving training in the proper use of firearms is self-preservation and not a manifestation of a yahoo gun culture.
This was demonstrated again on Black Friday when gun sales hit an all-time record high.
“Fueled by fears that the Obama [DAVID PLOUFE, JACOB LEW  et al Neo-Cons + "See NO evil on Wall St." Eric Holder]  administration will go after gun rights during a lame duck term, the FBI reported 154,873 background check requests on Friday – a 20 per cent increase on last year’s record total of 129,166 checks,” Paul Joseph Watson wrote on November 27.

“The number of guns sold could actually be double or more that figure because only one background check is recorded per sale even if buyers purchase multiple firearms.”
This poses a rather large problem for Obama, Michael Moore and liberal celebrities who want guns to disappear — either through law or confiscation. Millions of Americans will not surrender their guns and are now stocking up as the government sends out repeated signals that it will attempt to roll back the Second Amendment and may sign a treaty declaring the possession of firearms an international crime
Posted by verifi at 10:00 PM